A ring that slightly reduces any water damage sustained by the wearer. The stone residing in its center evokes the image of a crystalline drop of rain, and it has the ability to weaken the power of water. However, it cannot completely protect the wearer from water attacks, nor absorb their energy. The refined designs of these elemental rings and their efficiency as equipment make them the perfect present for aspiring young mages.

Ring infused with the power of water.

The Coral Ring is a rare accessory that absorbs Water-elemental attacks. It is sold in Istory in Bartz's world and in the Phantom Village in the merged world for 50,000 gil. It can be found behind a waterfall in the cave area of the Interdimensional Rift, and drops from Yellow Dragons.

It is an essential piece of equipment for fighting the superboss Shinryu, as his opening move is a Water-elemental attack. It is also useful against Twintania, who counterattacks with Tidal Wave. It also grants +5 Defense, Magic Defense, and Magic Evasion, as well as nullifying Fire-elemental attacks. However, it makes the wearer weak to Lightning-elemental attacks.

The Water Ring absorbs Water-elemental attacks. It is found on the way to the Corel Valley and is stolen from Acrophies and Serpents.

The Coral Ring absorbs Lightning-elemental attacks contrary to its earlier incarnations. It can be obtained early if Freya wins the Festival of the Hunt, and can be synthesized for 1200 gil, a Lightning Staff, and a Rod. It also grants +1 Speed, Magic Defense, and Spirit and +2 Magic, and teaches the abilities Insomniac, Lancer, and Man Eater. Everyone can equip it.

NulTide Ring (known as Water Ring in Japan) is a piece of armor for Yuna, obtained if the dominant ability on any ring is SOS NulTide.

Blue Ring is an accessory that provides +4 Magic, the ability to cast Water, and halves Water-elemental damage taken. When one is given to a creature, it can learn Water Ward. It can be bought for 3,000 gil at Besaid (any chapter except Chapter 4), found at Cavern of the Stolen Fayth (Chapter 3), dropped by Amorphous Gel and Haunt, stolen from Protean Gel, Sahagin Chief (normal and Oversoul), and Tentacles (rare), bribed from Amorphous Gel (3,892 gil), Dinictus (7,500 gil), and Tentacles (10,120 gil), as a possible prize for recalibrating the Thunder Plains towers, and as a possible reward for dispatching a level 2 chocobo to Mushroom Rock Road.

The Coral Ring is crafted from Coral Fragment x2, a Wind Crystal, and requires 80 Bonecraft. It is wearable by all classes at level 70.

Aqua Ring is an accessory that grants resistance to water by 20-30%, depending on its level, and upgrades to the Riptide Ring by using the Cobaltite component. Aqua Rings can be found in the Sunleth Waterscape (Rain-spotted Vale) and Palumpolum (Nutriculture Complex).

The Coral Ring is a

Ring useable by all classes, though it is best suited to

Conjurers. It can be crafted by

Goldsmiths, received as a reward from the quest 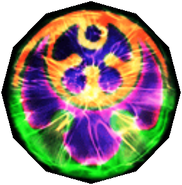