Cooler Mammoth is a boss in Final Fantasy IV: The After Years, fought by Palom and Porom during Porom's Tale.

If Palom runs out of MP the player should use a Ether on him right away. The player should make Porom focus on using Cura throughout most of the battle and avoid using the Twincast Band in this battle, since it takes a long time to charge. 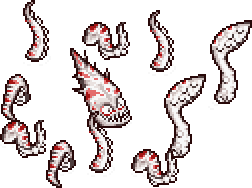 Cooler Mammoth (iOS).
Add a photo to this gallery

[view · edit · purge]A mammoth is any species of the extinct genus Mammuthus, one of the many genera that make up the order of trunked mammals called proboscideans. The various species of mammoth were commonly equipped with long, curved tusks and, in northern species, a covering of long hair. They lived from the Pliocene epoch (from around 5 million years ago) into the Holocene at about 4,000 years ago, and various species existed in Africa, Europe, Asia, and North America. They were members of the family Elephantidae, which also contains the two genera of modern elephants and their ancestors.

Retrieved from "https://finalfantasy.fandom.com/wiki/Cooler_Mammoth?oldid=3239513"
Community content is available under CC-BY-SA unless otherwise noted.