Conquest is a system that appears in Final Fantasy XI and it refers to the portion of the world each faction controls. There are four factions in the conquest system, one representing each of the three starting player cities (Bastok, San d'Oria, and Windurst) and one faction is for the beastmen, non-player races generally considered evil or unenlightened. The city of Jeuno is also involved in Conquest, but only as a neutral party that impartially arbitrates the Conquest system.

The three nations are also ranked first, second, and third overall depending on how many regions they conquered. If one nation develops an enormous lead in the conquest, the other two nations will ally with each other to unseat them. When two nations ally for conquest, players of both nations can make use of the other nations' conquest overseers.

The process of computing the effects of regional influence is known as the Conquest Tally and takes place every real-life week at Japanese Midnight on Sunday. Conquest overseers can tell players how much time remains until the next Conquest Tally. There are also certain quests that are repeatable only once per Conquest Tally.

Players may view the current state of conquest by typing "/regionmap" or "/rmap", or by selecting "Region Info" and then "Conquest" from the main menu.

There are many vendors that sell particular things in each city depending on who controls a region. Some items can only be purchased, either from vendors or through conquest, when a city is in 1st or 2nd place. In particular, there is an entire category of vendor, known as regional vendors, who will only sell goods at all if the nation they are in controls the region they are associated with.

Many items also have specific effects that are active only when used inside a region that is in their home nation's control while others have a specific effect only in regions not under their home nation's control. Furthermore, if a region is controlled by the beastmen, crystals do not drop from monsters in that region, the region's outpost is unmanned, and none of that region's three regional vendors will sell anything (which can make some goods that have no few or no other sources unavailable or expensive on the Auction House).

Players can also buy items from other nations with their own nation's conquest points so long as their nation is ahead of the nation they want to purchase the item from. The price, in CP, is doubled for non-residents.

An outpost is a small building that can be found in the field that is staffed by NPCs of the nation that controls the region it is found in; there is only one such outpost per region.

These NPCs will allow their nation's citizens to use the outpost's services, which are:

When a player's nation controls a region, that player may talk to a gate guard in their nation to undertake a supply quest. When this happens, the player must choose one of the nation's controlled regions, and they will be given a key item bundle of supplies for that region's outpost. They then have until next Conquest Tally to deliver those supplies to the outpost's personnel. Completing this task awards a small amount of CP and increases regional influence a little bit in addition to allowing the player the privilege of using that outpost's regional teleport in the future.

Expeditionary Force is an activity that players of rank 3 or higher in their nation may team up to undertake to expand their nation's Conquest. Those wishing to participate must speak to one of their Conquest overseers and choose to participate in an Expeditionary Force and select a beastman-controlled region to try and conquer. They then receive the EF Badge status.

Once all the players wishing to participate have EF Badge status, they can talk to the Conquest overseer again to receive a "EF Insignia" key item and be teleported to the targeted region. After that, the EF members must find beastman banners in the region and click on them to start a level-capped fight against some beastman Notorious Monsters. Winning the fight gains influence in the region. Winning multiple fights back-to-back results in a Conquest Chain for additional increased influence. It is also possible for EF members to earn influence by looting treasure chests and coffers in the region.

The game remembers players who have participated in Expeditionary Force. If the targeted region comes under the nation's control next Conquest Tally, the EF members receive a large CP bonus for their efforts.

Garrison is an activity where players help defend their nation's regional outposts against waves of attacking beastmen alongside numerous allied NPCs while under a level cap. In order to initiate Garrison, a player of rank 2 or higher must kill beastmen in the region until they drop that region's rare/ex Garrison item. Next, they must take the item to the guards manning the outpost in that region, where they will recognize it as a coded beastman communication conveying plans for an imminent attack on the outpost. They will ask the player to assist in fending off the attack and keeping the inexperienced soldiers defending it alive.

The player's group will then be placed under a level cap, and the NPC soldiers and attacking beastmen will spawn and begin fighting. Victory is achieved when all beastmen of all four successive waves have been killed; defeat is the result when all of the NPC defenders have been killed.

Rewards include equipment exclusive to Garrison as well as Mannequin parts. 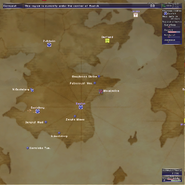