Cause the target to become delirious and act irrationally.

Causes foes to turn on each other.

Confuse (CONF on the NES and Muddle in Final Fantasy Origins) is a level 4 Black Magic spell that attempts to inflict Confuse on all enemies with a low success rate.

The spell can be bought at Elfheim and learned by the Black Mage, Black Wizard, Red Mage, Red Wizard, and Ninja job classes. It can also be used from the Wizard's Staff and the Braveheart. In the Dawn of Souls, 20th Anniversary Edition, and iOS releases, it costs 15 MP to cast.

Confuse is a Black Magic spell which inflicts the Confuse status effect on one or all enemies. The success rate increases with the spell's level. Any character can learn Confuse by having them use the Confuse Tome (Confuse Scroll in Origins).

Confuse VI is used exclusively by Sorcerer, while Confuse XVI is used by Beelzebub, Hecteyes, Imp, and Devil Wolf.

Confuse (also called Confu) is a level 4 White Magic spell that can be bought in Northeast Saronia, Doga's Village, and Gysahl for 3,000 gil. Confuse can also be cast through the Lamia Scale item and through the weapon Faerie Claws. It has a 25% accuracy of inflicting Confusion to one or all enemies.

Confuse is a White Magic spell learned initially by Rosa and Porom. It inflicts Confuse to a single target at the cost of 10 MP.

Confuse is a level 3 White Magic spell that costs 4 MP to cast and can be bought for 650 gil at Karnak and Jachol. Confuse can be used by Apanda, Byblos, Carbuncle, Black Warlock, Imp, Omniscient, Sorcerer, Tiny Mage, and Wendigo.

Confuse can be used by catching and releasing a Mindflusher, Mini Satana, or the Imp at either Great Forest of Moore or Exdeath's Castle. It also is one of the spells that can be cast from the Wonder Wand for free.

Confuse is an effect spell that costs 8 MP to cast, and is learned at a x7 rate from Cait Sith, though Celes learns the spell at level 32 (although there is a bug that prevents her from learning it in the original versions). It has a hit rate of 94 and is vulnerable to Runic. The spell is used in the first fight with Kefka, Level 20 Magic, Magic, Wizard, and Abaddon.

Confuse is an Added Ability to the Angel Brush weapon.

There is also the dummied out enemy spell called Confusion. It would have inflicted Confuse on all targets. It has a hit Rate of 68 and would cost 20 MP to cast.

Confu is the level 1 spell on the Mystify Materia and costs 18 MP to cast. It has a 60% chance of inflicting the target with Confusion. Mystify can be bought from Gongaga or Rocket Town for 6,000 gil. The enemy Scissors (Lower) and the boss Helletic Hojo can use the spell, though Helletic Hojo will only cast the spell if both of his arms are alive.

The White Magic spell Confuse inflicts the Confuse status. Dagger learns it from the Asura's Rod and Lamia's Tiara for 35 AP, and it costs 8 MP to cast. It can be reflected and works with Return Magic. The Cactuar enemy and Quale can also use the spell. It has a 50% base accuracy.

Confuse is an enemy-only ability used by the Guado Guardians during the Wendigo battle, Master Coeurl, Omega Weapon, and Ultima Weapon.

Confuse is a Dark Knight Arcana spell that requires 30 AP to learn. It requires Demi to be mastered first, and costs 12 MP to cast. It can also be used by equipping the Chaos Shock accessory as well as equipping the Raging Giant Garment Grid.

In the original version Confuse is Arcane Magick 2 that costs 10 MP to use and is attainable after the events at the Tomb of Raithwall. It can be bought from Rabanastre and Eruyt Village for 1,400 gil.

In the Zodiac versions, this spell was made White Magick 8 and can be used by the White Mage and Knight job classes, although the Knight must have the Hashmal Esper license first.

A spellblade technique that causes the target to lose their rational nature and perform random actions.

"Infuse a bug's mind into the soul! Confuse!"

Confuse is an ability learned by the Templar job for 200 JP. It inflicts Confuse to one target with a range of 4 for 14 MP.

Confuse is a Dark Magic spell and costs 2 AP to cast. The spell can be given to any character by having a Confuse Tome in the character's inventory. The spell can only be purchased in Guera and Urbeth for 500 gil.

Confuse is an ability that can be chosen in the Onion Knight's Sage EX Burst, although it does nothing when selected.

Shoot a magical missile that has a chance of confusing an enemy, reducing the frequency whit which it can take action.

Confuse is an active ability that inflicts confusion on a single target for 3 AP. It can be used by 2P Tama, Coeurl, Devil Wolf, and Serafie.

Confuse is a magic spell in a few of the games in the series. In Birth by Sleep and Re:coded, the spell makes enemies attack each other. In Chain of Memories, it makes enemies attack less often. In Dream Drop Distance, it confuses an enemy for six seconds and grants Magic +1 when attached to a Dream Eater recipe. 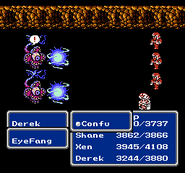 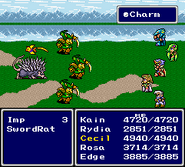 Confu used against all enemies in Final Fantasy VII. 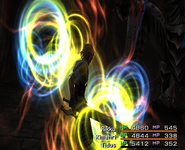