Cid Pollendina: Oh, shut up and help me remodel the Conde Petie Mountain Path page!
Please expand this article into a full one. The following tasks need to be completed:

After their wedding, Zidane and Garnet present themselves to the Watchman brothers as husband and wife to gain access to the Sanctuary. As they start to leave, a girl and a moogle run by, followed by the dwarves shouting "Thief!" Vivi and Quina rejoin the party and they agree to continue the journey.

They arrive at the Mountain Path only to find that the girl from before is stuck on a branch. When her pet moogle, Mog, notices the party, it flees and the girl becomes desperate. The party approaches her and she is surprised that, unlike herself, none of them have horns. She begs for help and dissuades Quina from eating her, turning to chasing after Mog instead. Quina jumps to another part of the path and the impact drops the girl from the branch and she lands on Zidane's arms. She thanks him and introduces herself as Eiko.

Eiko joins the party and they decide to escort her home. On their way there, Zidane, Vivi and Garnet lay eyes on the massive Iifa Tree. The party is attacked by the Hilgigars and, after defeating it, they move on to Eiko's home in Madain Sari.

After the party visits Terra, the Mountain Path along with Conde Petie are inaccessible due to Iifa roots blocking all entrances.

Magic Tag, Tent and Ether can be purchased from Stiltzkin for 666 gil.

There are several statues along the path that hold colored stones: Blue Stone, Red Stone, Yellow Stone and Green Stone. If all of the stones are collected and placed in another statue, the party will receive a Moonstone. The Moonstone can be used as an Add-on and, when equipped on Eiko, Carbuncle will use Pearl Light, which casts Shell (short animation) or Shell and Protect (long animation) on the party. Collecting all possible Moonstones also earns an achievement in the newest versions of Final Fantasy IX.

If the player catches an oglop in the Conde Petie Mountain Path and brings it to Bryan Rootrunner in Conde Petie, he will give the player an Oglop card.

Stiltzkin is a globetrotting moogle who sells item packs to fund his travels. When going through Conde Petie Mountain Path the first time, he will be next to the save moogle, and offer a pack of Magic Tag, Tent and Ether for 666 gil. The party's inventory cannot be full on any of these items or the item pack is not available. Buying all of Stiltzkin's items in every area where he can appear earns a Ribbon at the end of his trip in all versions besides the very first Japanese PlayStation One version.

Quina can Eat Gnoll or Troll to learn Vanish, and Ochu to learn Def-less.

The theme of Conde Petie Mountain Path is "Conde Petie".

Concept art of the statues. 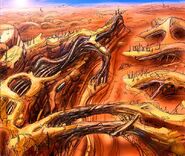 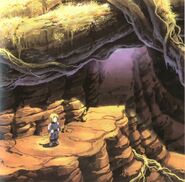 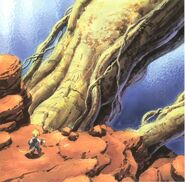 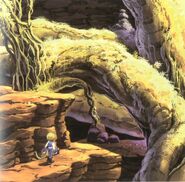 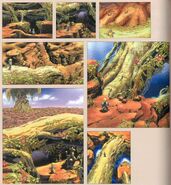 Outside the mountain path. 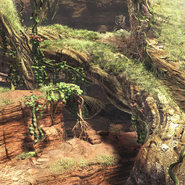 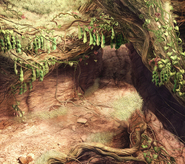 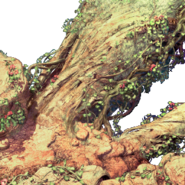 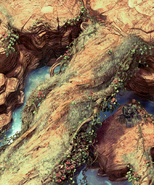