Conde Petie is the settlement of the dwarven race in Final Fantasy IX, located on the Outer Continent. The town doubles as a border gate to a mountain path that leads to Iifa Tree and Madain Sari.

A single flat building shaped like a bridge, Conde Petie was built astride two Iifa roots. This location was chosen, according to Darcy Skywatcher, for its proximity to both the mountains and the forests that the dwarves consider sacred, and for its ample sunlight. Neither the town of Conde Petie nor the Mountain Path are accessible in endgame.

Conde Petie receives few visitors, save for "pyntie-het" traders from the Black Mage Village. To gain entry, visitors must say the dwarves' sacred greeting, "Rally-ho!"[note 1], preferably with a wide mouth and raised hand. Nuts and berries, some of which are brought by black mage traders, are a staple food source. Boiled owl, seasoned oglop, fried rootbeans, and pumpkin bombs are also popular delicacies. While dwarves are a recurring race in Final Fantasy, Final Fantasy IX is the only game where they do not live underground. Whereas dwarves in previous games have been associated with living and seeing in the dark, Conde Petie's culture reveres sunlight.

The symbol of Conde Petie is a Kirkboat, where Father David Heavenguard blesses marriages. Prior to the events of Final Fantasy IX, 99 couples had undergone the ceremony.

Zidane to Dagger before the ceremony

When the party arrives at Conde Petie, Vivi is surprised the dwarves aren't scared of him, and confused as to why they speak to him as if they already know him. When a black mage arrives to trade with the dwarves, Vivi is shocked and tries to approach him, but the black mage flees. Harold Pathknower mentions that if they're looking for the "pyntie-hets", they can find their village in the southeastern forest. Vivi wants to go there and the party leaves.

After visiting the Black Mage Village, the party learns Conde Petie's Sanctuary could lead them to Kuja and decides to return to the dwarven town. Passage to the Sanctuary is only allowed to couples who get married. Garnet agrees to marry Zidane, and Vivi and Quina may either get married as well or sneak past the guards during a ruckus caused by Eiko, a girl who infiltrates the town time to time to steal food. With permission to enter the Sanctuary, the party moves onwards to the Conde Petie Mountain Path.

After the party returns from Terra, Iifa roots block all entrances to both the town and the mountain path.

Upon finding Conde Petie, Zidane mentions that there is still no Mist and comments on the odd shape of the building. Quina runs inside, hoping to find "fine cuisine". When Zidane complains that all Quina thinks about is food, Garnet is quick to reply that all Zidane thinks about is girls.

An exclamation point will appear when the player walks across a specific area hidden by the second Iifa root-wrapped column in the entrance where, if selected, Jenny Greeter will accuse Zidane of being a lech for spying at her from the shadows.

The corridor has two areas. The first one grants access to the ATEs "Vivi And The Couple" and "Quina Accused". This is also where the player meets Harold Pathknower and Jenny Greeter.

In the second area of the corridor, the player meets Darcy Skywatcher and her brother Bryan Rootrunner, as well as viewing the ATE "Dagger And William".

The pathway is initially patrolled by Robert Dogherder and his dog. When the player returns to Conde Petie, after the events at the Black Mage Village, Father David Heavenguard can be found here.

The Inn is run by Margaret Miller and her lazy husband Granin Miller. The beds are on one side of the inn, while Helen Birdkeeper, Jinkus Emptybottle, Barbara Gibgab and Walter Teamaker chat and drink tea on the other side. The ATE "Quina Can't Communicate" can be activated here.

This item shop is the location of Mogmatt the moogle. John Fruitbringer is usually found here.

Thomas Goldpiler is the owner of the Weapon shop of Conde Petie. The Watchman brothers, Matthew and Richard, faithfully guard the entrance to the Sanctuary. Eiko and Mog are first seen here, sneaking away after stealing food.

The Shrine is where Father David Heavenguard conducts the ritual ceremonies. Couples stand on the large Kirkboat in the middle of the shrine. Talking to Vivi here will earn the player the "Hungry Bryan" ATE. This is also where Kelley Fingerwaver and Derek Stonehammer are found.

Conde Petie becomes inaccessible after entering the Shimmering Island portal, and so the player should make sure to get every item before that or they will be missed.

The letter the player delivers from Mogmatt in Conde Petie item shop to Suzuna at the Iifa Tree roots:

There are no enemy encounters inside the town, but the world map outside consists of Donna Plains, Magdalene Forest, Dyshnose Shores, Gegalrich Shores, and Kognish Shores. Ragtime Mouse may appear in forests. The party may also run into some friendly monsters on the world map around here. The chart below shows encounters for "disc 1" though the player can't come here yet then in a normal playthrough.

The town is situated upon the roots of the Iifa Tree, which makes it somewhat resemble a mikoshi, a "portable Shinto shrine", a vehicle used to move a deity between the main shrine and temporary shrine, or for festivals or when locating to a new shrine. The headgear "Ritual Hat" sold in Conde Petie is called "Mikoshi-style hat" in Japanese. The room where marriage ceremonies are conducted also has similarly shaped "podiums".

Concept art of the village entrance.

Concept art of the village entrance.

Concept art of the back entrance. 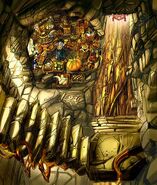 Concept art of the shop.

Concept art of the shop. 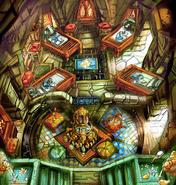 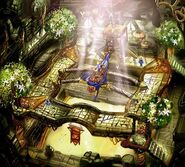 Conde Petie on the world map.

The village is inaccessible in the endgame.

Conde is an English word for the duty of directing a ship. In Latin it means count, the male ruler of a county.