"A fiend whose impossibly strong shell gives it very high defense. A powerful blow can supposedly shatter the shell, but can that be true?"

Available after defeating Concherer in Via Infinito.

Gunk, Megaton Press
Nothing to learn

"Oversouling has caused its shell to harden considerably. At times like this, all you can really do is smile and keep shelling out damage."

Available after defeating Concherer in Via Infinito.

Concherer has high HP, Strength, Defense, Auto-Protect and Auto-Shell. His strongest attack is Megaton Press, which does up to 65,000 damage, but only hits one person and he only does it every once in a while. Its damage can be reduced with Protect and lowering the Cheer Meter below 3 stars. Concherer's regular attacks do 2000–3300 damage and he often drains the party's MP by using Gunk, which also inflicts Poison.

It is a good idea to bring a stack of Phoenix Downs and Mega Phoenixes due to Concherer's one-hit kills. Using Light Curtains at the start of the battle helps greatly, as does using Remedies to heal the status effects Concherer can inflict.

One strategy in the original PS2 version is to have a Gunner in HP Critical health with the Cat Nip accessory (which can be won from the previous boss). With the Trigger Happy command, Concherer will be defeated in a few turns. Another girl should revive the Gunner with a Phoenix Down if she dies. A Dark Knight's Black Sky spell is a good alternative, as it hits ten times.

This strategy is no longer viable in the International and HD Remaster versions, due to Cat Nip inducing Berserk. As an alternative method, the player can equip Cat Nip to a Thief, who will deal two hits of 9,999 damage every turn. The other two party members should be Berserkers, or a similarly fast class, and equip accessories with either the Auto-Haste or SOS Haste abilities. All three girls should have protection from Poison to nullify Gunk. Since Concherer's moves will only kill one character at a time, another girl can revive her with a Phoenix Down before he strikes again. It will take the Thief 18 attacks (at 9,999*2 damage each) to kill Concherer, which can be accomplished in under ten minutes.

Another strategy is to have one Thief with Cat Nip and two Warriors. The Thief should equip Haste Bangle, and it is recommended, but not necessary, to have both Warriors wearing a Shining Bracer (Auto-Protect) and Speed Bracer (Auto-Haste). The party can enter the battle with the Thief in HP critical to trigger the Cat Nip, and the goal is to get the Thief to attack 18 times; if equipped with the Haste Bangle, the Thief should be attacking almost back to back. The Warriors should use Sentinel so all attacks on her deal only 1 point of damage, or use a Phoenix Down on the Thief if she dies.

Another strategy is to use three Berserkers with Luck-enhancing Garment Grids and accessories, plus Star Bracers for Auto-Reflect to block Flare (and to use it to damage Concherer himself). If Star Bracers are unavailable, a Star Curtain or Reflect can be used instead.

An easy but time consuming way to defeat Concherer is to use three Berserkers with Evade and Counter learned to always dodge the Concherer's physical attack, and immediately counter. This leaves Megaton Press as the sole threat. The player needs to have plenty of Phoenix Downs in case anyone falls. There is no need to heal since Megaton Press will easily down them anyway.

As the player may be filling out Shinra's Bestiary, it may benefit to come into the battle against the Concherer Oversouled. An Oversoul Concherer loses his best attacks, and his spells can be deflected back to him for damage. Shell and reducing the Cheer Meter below 3 stars are recommended to reduce damage if Reflect is not used.

If the player has completed Shell Shocker's fiend tale, it'll be available to fight in the Fiend Arena. It is possible to fight it there until it Oversouls, then come back and fight Concherer.

To end the battle in approximately 30 seconds, one should ensure Concherer will be Oversouled by repeatedly battling and then finally fleeing from the Sleepy Sneaky team once it Oversouls in the Fiend Arena. Then, the player can equip both a Wring and a Bloodlust to a high-level Machina Striker (the Pop Fry will also work) that has Total Limit Break, then replace those two accessories with an Adamantite and a Cat Nip (equipping the accessories in this order prior to battle brings the Machina Striker to critical HP to activate Cat Nip at the start of the fight). Machina Striker should be taught First Strike using two Sprint Shoes, then initiate the battle. Attacks like Gunk and Demi will pose no threat to the Striker, and it should be able to endure one Flare thanks to the Adamantite. If Machina Striker gets to attack three times (it uses Triple Play! for over 100,000 damage each turn), the player will win.

If Concherer is defeated in his normal form, he will fade into pyreflies and disappear. However, if he is defeated in his Oversoul form, his shell will break and fall to the ground before fading like most fiends. This can also result in a bug where he can then be fought outside of his shell should he be encountered again.

When the Concherer is captured at Chapter 5 in Bevelle with a Trap Pod L, after clearing 60 Cloisters in Via Infinito, it comes equipped knowing Attack, Cure, and Gunk. It has Ailment Def., which acts as Super Ribbon, and Total Limit Break, which allows it to break HP and Damage limits.

Concherer has absurdly high Defense and Magic Defense, both due to its unbreakable shell, mediocre Accuracy, Strength, Agility, and high Magic. It has low Evasion and Luck. Equipping Adamantite will allow it to have both Auto-Protect and Auto-Shell at the expense of a slightly lower Agility.

Concherer appears in the Fiend Arena as part of the Slimy Boss team. Identical to his Via Infinito appearance, he is a highly dangerous foe who can sometimes beat Paragon, Trema, and even Major Numerus.

Another Concherer trapped a PuPu when it entered the fiend's vacant shell before it returned. Shinra, unaware of the PuPu and thinking it was what the Concherer was in life, tries helping it out. After tugging and smashing the shell to free it fails, the PuPu gets an idea. Having Shinra release the Concherer on the beach of Besaid, the PuPu guides the fiend to dive into the water to have it dissolved by the briny water, as salt dehydrates a snail. Once the Concherer is no more, the PuPu emerges and thanks Shinra in Spiran language as it leaves in a flying saucer. 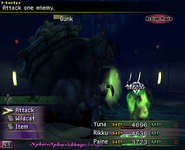 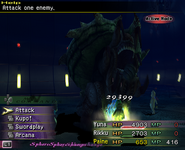