Companions are pet chocobos that will fight alongside the player in Final Fantasy XIV: A Realm Reborn. Players can make their chocobos fill the role of a tank, healer, or damage dealer by putting the companion's skill points into the Defender, Healer, or Attacker skill trees. Companions cannot be used in instanced dungeons or duties.

Players can customize their chocobo with various bardings. The bardings are only cosmetic, and give no bonus stats or other benefits. After patch 2.35, players also gained the ability to dye their chocobo different colors.

To obtain a companion to summon into battle, players must obtain their chocobo from their Grand Company by completing the "My Little Chocobo" quest at level 20, and then complete the "My Little Feisty Chocobo" quest at level 30. Afterward, players can summon the companion to fight alongside them by using Gysahl Greens sold by vendors in the starting cities.

Patch 3.5 changed companions to function as a pet rather than a full party member, allowing more flexibility when it comes to joining parties or starting leves, and permitting the use of Duty Finder or Raid Finder. Note that the companion will be temporarily disabled while inside instanced duties, with the timer halted.

To obtain SP for a chocobo to learn skill tree abilities, players must rank up their chocobo by obtaining experience for their companions. Players can get their chocobo companion to a max rank of 10. The amount of experience to rank up a companion increases by each rank, making the achieving of rank 10 a long process.

Experience for companions is accumulated through different means, such as defeating monsters in zones, training chocobos with a Krakka Root, or by completing the Bosom Buddies weekly challenge logs. There are also buffs that allow players to increase the amount of experience a chocobo earns, including the "Man's Best Friend" Free Company action, and training a companion with the Curiel Root food item.

After the release of patch 2.3, should players train their companion with a Thavnairian Onion at rank 10, their chocobo can now break the level cap and go to higher ranks. The effect can repeated a total of ten times to rank 20. Thavnairian Onions are extremely rare to obtain through gardening, making the ranks above 10 rare among the player base.

After obtaining SP for a chocobo through ranking, players can make them learn abilities and traits from role skill trees. The amount of SP received matches the rank the companion achieved, so should a companion achieve rank 3, they will receive 3 SP to spend. All companions receive 11 SP for achieving all ranks after 10. In total, players can achieve 165, which will allow their chocobo to learn all skill tree actions.

The Defender skill tree allows a chocobo to function as a tank. The skills allow the chocobo to attempt to gain enemy enmity and hold their attention away from the player. For the chocobo to solely act in this role, the player must have their companion in the Defender Stance. As of Patch 2.3, the Defender chocobo is not able to hold monster aggro, and is largely ineffectual in combat.

Achieving rank 10 on the Defender skill tree awards the player with the Defender Relic barding, allowing them to decorate their chocobo to resemble a Paladin.

Achieving rank 10 on the Healer skill tree awards the player with the Healer Relic barding, allowing the player to decorate their chocobo to resemble a White Mage.

Players may start to train their companions after unlocking the ability to do chocobo raising after completing the "Bird in Hand" quest at level 30.

To train a chocobo, players must rest their chocobo in a stable either in their Free Company or personal housing stable. Players can then feed their companions fruits or vegetables. After training a chocobo, they will have to remain resting in the stables for an hour until they can be trained again.

Each item has a different effect on the chocobo, such as rewarding experience or bestowing a buff raising a certain stat for the companion. Should the player feed a certain fruit or vegetable repeatedly for a period of time, that item will become the chocobo's favorite feed and will provide an extra temporary buff to the chocobo.

Players can obtain training fruits and vegetables from gardening.

Concept art of a chocobo with white mage barding.

Concept art of a chocobo with black mage barding. 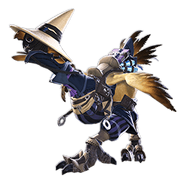 Concept art of a chocobo with dragoon barding.

Concept art of a chocobo with tank barding.

Concept art of a chocobo with a Slepnir barding.