Deals unaspected damage to all enemies near point of impact.

Cometeor (コメテオ, Kometeo?), also known as Comet 2 or Comet2, is a stronger form of the spell Comet in the Compilation of Final Fantasy VII.

Comet2 is the second spell on the Comet Materia. It deals non-elemental damage to four random enemies, takes 12,000 AP to learn and 110 MP to cast. The spell has a base spell power of 1.875x the base magic damage for each individual hit, and the spell cannot be reflected. If paired with Quadra Magic, starting from the second cast, Comet2 concentrates all meteorites on the last target rather than spreading them randomly.

It is also an enemy ability used by King Behemoth and Ruby Weapon.

Cometeor is a non-elemental Magic Materia.

Cometeor is an Adrenaline Rush ability available to caster DPS classes in the Borderland Ruins (Slaughter) PvP campaigns. When used, Cometeor deals unaspected damage to all enemies within range of the point of impact. The ability can only be used by Arcanists, Thaumaturges, Summoners, and Black Mages. The ability shares the same animation with the Skyshard caster Limit Break.

Comet 2 is an intelligence ability. In order to obtain Comet 2, the player must perform transmutation on the Comet ability. In addition, Aerith also uses Comet 2 when summoned into battle.

Cometeor is an enemy ability used by all forms of Ruby Weapon. It deals non-elemental magic damage to four random targets. 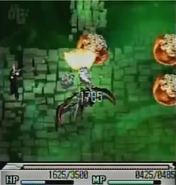 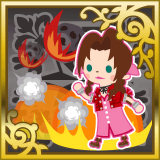 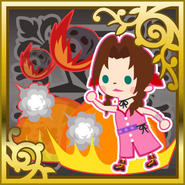 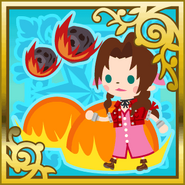 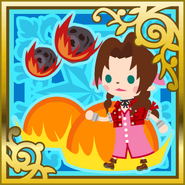 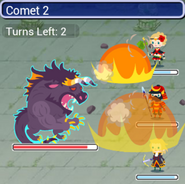 [view · edit · purge]A comet is an icy small Solar System body (SSSB) that, when close enough to the Sun, displays a visible coma (a thin, fuzzy, temporary atmosphere) and sometimes also a tail. These phenomena are both due to the effects of solar radiation and the solar wind upon the nucleus of the comet.

The name of Cometeor is a combination of Comet and Meteor.

The Japanese name of the spell (コメテオ/小メテオ) is also a pun on the word "Ko" (小), "small". So it means a smaller version of Meteor.

Magic
Retrieved from "https://finalfantasy.fandom.com/wiki/Cometeor?oldid=3409957"
Community content is available under CC-BY-SA unless otherwise noted.