Coeurlregina is an Area Conquest fiend fought in the Monster Arena after capturing all fiends on the Mushroom Rock Road. It has the same model as the Master Coeurl.

Coeurlregina's Chaos attack inflicts Confuse, Doom, and Curse on the party. Its Hyper Blaster inflicts Death, ignoring the target's Deathproof armor. When below half HP, it will start using Drain. Against aeons, it will use Drain, Hyper Blaster, Thundaga, and Flare.

It drops weapons with Deathstrike and Double AP, and armor with various proof abilities, Deathproof being a fixed ability.

It is best to have armor that protects against Confuse. With adequate protections, Coeurlregina can be easily defeated with Overdrives and aeons, though Curse is one of the few status effects aeons are vulnerable to. Ixion may be a good choice, due to Coeurlregina's Thundaga. 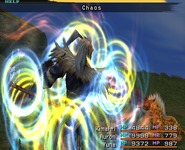 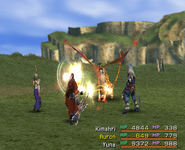 Hyper Blaster.
Add a photo to this gallery

Retrieved from "https://finalfantasy.fandom.com/wiki/Coeurlregina_(Final_Fantasy_X)?oldid=3369008"
Community content is available under CC-BY-SA unless otherwise noted.