The Coeurl (クァール, Kāru?; or クアール, Kuāru?), also known as Torama (トラマ, Torama?), is a recurring enemy in the Final Fantasy series, first appearing in Final Fantasy II. Its appearance resembles that of a cat, cheetah, or leopard, often with very large whiskers. Coeurl is renowned for using a move called Blaster, which does large amounts of damage or, in some cases, can Paralyze or cause instant death.

Common and notable variants include the Werepanther (ウェアパンサー, Weapansā?); the Panther (パンサー, Pansā?), which is usually a lower-level palette swap of the Coeurl; the Coeurlregina (クァールレギナ, Kāruregina?), or Queen Coeurl, which is a more powerful variant; and the Cait Sith (ケットシー, Kettoshī?), although this variant is more common in early games, and has since become a recurring character.

The Coeurl is an enemy encountered in Palamecia and Pandaemonium. It can use the Blaster I skill, which may paralyze the entire party. A group of Coeurls guard a chest on the sixth floor of Palamecia Castle containing a Sun Blade. Other enemies that resemble Coeurls are Werepanther and Cait Sith.

Coeurl (Blackcat on the SNES) is an enemy encountered in the Tower of Babil and the Underworld. Aside from its Blaster, it is not that difficult and does not often attack unless attacked itself, so killing off any other enemies it may come with is a better idea. Another enemy that resembles Coeurls is the Cait Sith, and the NDS and PSP version's Coeurl Regina.

Main article: Coeurl (The After Years)

The Coeurl is an enemy in all Challenge Dungeons but Edward's, as well as in the Lunarian tale. The more powerful Coeurl Regina appears in the Depths, while the Cait Sith appears in various areas, but is the weakest of the three variations.

Coeurl Cat (Wild Cat on the SNES) is an enemy in the Advance version. The Coeurl Cat is encountered in Owzer's Mansion in Jidoor. When it is left alone, it counters most attacks with Fireball. Other enemies that resemble Coeurls are Lycaon and Stray Cat.

Cuahls can be encountered at Gaea's Cliff. It has very low HP in comparison to other enemies at the point, and can easily be killed.

Torama is a leopard-like creature with tentacles instead of whiskers. It will use magic attacks at first; however, it stands up when low on HP and begins using physical attacks. It is an enemy encountered in Esthar, Tears' Point, the Great Salt Lake, the Abadan Plains, and Lunatic Pandora.

Torama is an enemy encountered in the Desert Palace. They are more leonine.

The Coeurl is an enemy encountered in the Calm Lands. The Master Coeurl, a palette swap, can be encountered in the Omega Ruins. Both species are able to cast all Black Magic spells to their second tier levels, and can cast Cura upon themselves.

Another attack, Death Blast, has a 25% - 50% chance of causing instant death, and their Blaster attack causes high damage. There is another stronger version named the Coeurlregina can be fought in the Monster Arena. It can inflict various ailments including Curse and Doom and even has a stronger form of Blaster, Hyper Blaster.

Coeurl is an enemy encountered in Besaid Island, the Calm Lands, and the Mi'ihen Highroad. There are two variations: Coeurl and Queen Coeurl. It takes 14 kills to Oversoul a Coeurl-type fiend.

Coeurl is a genus of the Beast family native to Aragoneu and Elshimo Island. Toramas are a member of this genus.

Coeurls are an enemy encountered in the Golmore Jungle and the Tchita Uplands. Coeurl sports the familiar long whiskers, leopard skin, and high magick skills: being able to cast Cura upon themselves and nearby allies, but also has a bulbous, squid-like head. Other enemies that resemble Coeurls are the Panther, Ose, Bandercoeurl, Feral Retriever, and Grimalkin. Their Blaster attack causes Blind, Poison, Sleep, Slow, Silence and Sap.

Native to the regions of the Near East, these predatory quadrupeds are unrivaled in their savagery. A coeurl subdues its prey by unleashing electrical shocks from the two whip-like appendages that frame its fang-lined jaws. The feral specimens encountered in Eorzea descend from escaped war beasts once trained on a remote island at the mouth of the Rothlyt Sound known as the Pearl.

The common Coeurl is a mid-level enemy that can be found in Outer La Noscea, but other variations can be found throughout La Noscea. They can be hunted for their hides and meat. In addition, it is possible to obtain a special coeurl mount by upgrading to the special edition of the game. There also exists two minions based on coeurls: the Coeurl Kitten and the Black Coeurl.

Coeurls can be encountered as bosses throughout the game. Several FATEs feature coeurl bosses, as do the Sastasha and Temple of the Fist dungeons. The Heavensward expansion introduced a series of elite FATEs against Coeurlregina, a massive Coeurl with a rack of wooden antlers that requires several parties of players to defeat.

The Sphairai Relic Weapons are a pair of fist weapons made to resemble coeurl heads. They once belonged to Ivon Coeurlfist, a monk renowned for training with a pair of tamed coeurls. Ivon can be encountered as a boss in the Temple of the Fist as well as his coeurls.

The playable Hrothgar race introduced in Shadowbringers can be customized to feature the signature whiskers as a possible mustache option, suggesting a link of ancestry.

Coeurls are enemies fought in Leide and Duscae. They have high HP and high strength, and are immune to Lightning attacks. When defeated, they drop Whisker items.

In addition, stronger Elder Coeurls can be fought in Leide, Duscae and Cleigne, which have gray fur and greater strength.

The Coeurls appear as enemies. Lesser Coeurl is a weaker version of the Coeurl, both fought in the Corsi Cave. Militesi Coeurl also exists.

The Coeurl is one of the Panther-type enemies that are weak against Earth. Coeurls are light blue variations of the Panther. They can use Blaster, Claw, and Cat Scratch.

Coeurls are powerful blue beasts related to Red Panthers. They appear wolf-like. They have a large amount of HP and are very dangerous to approach because of their Blaster skill and high Attack power. Luckily, there is usually never any more than one Coeurl at a time.

They are encountered on the following missions:

They also appear as enemies when fighting the clans from the Nargai Cave, Jagd Dorsa, and Gotor Sands.

The Coeurl appears at Moschet Manor, Daemon's Court, and Mount Kilanda in all cycles. They are not aggressive, but will cast Thunder on the player if they get too close, inflicting paralysis.

The Coeurl appears as an enemy. Their lightning attacks are slow, but powerful. Holding one will allow the player to blast his enemies with thunder bolts.

The long, flexible whiskers of this great cat snake about it like whips. In perilous passes where even experienced adventurers struggle to survive, this beast lies in wait with unusually strong magic, not even needing to rise...

Coeurl appears as an enemy, based on its Final Fantasy VIII appearance.

Coeurl from Final Fantasy IV appears as an enemy.

The Coeurl is an enemy encountered on the South Figaro Sea. It uses Claw and drops the Cat Claws.

In the Maxima version, Coeurl are a group of Mirage, as well as the name of one of the creatures. The group includes only one family, made up of Lesser Coeurl, Moomba, and Coeurl.

Coeurl can be transfigured from a Moomba above level 35. They can only be found in the Hidden Dungeon and become imprismable by inflicting them with

Coeurl appears on a few cards.

The Coeurl and its variants are dangerous foes that are found in many dungeons. They are twice as fast as Chocobo, and can Halt and Silence him, leaving him unable to run or fight back with skills. They appear as regular Coeurls, Queen Coeurls, and Coeurl Shade.

Coeurl is a chance card. The card's ability: Can buy any house with 5x cost.

This section in Lord of Vermilion is empty or needs to be expanded. You can help the Final Fantasy Wiki by expanding it. 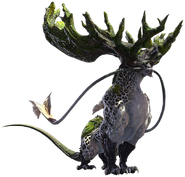 The Coeurlregina in Final Fantasy XIV.

Coeurl in Lord of Vermilion.

[view · edit · purge]Tora and ma are the Japanese words for tiger and demon respectively.