Coerthas (クルザス, Kuruzasu?) is a location in Final Fantasy XIV. It was a mountainous region outside the city of Ishgard in version 1.0, located northwest of the Black Shroud and north of Mor Dhona. The area was later redesigned as snow-covered highlands in A Realm Reborn.

The Holy See of Ishgard[]

One of the great City-States of Eorzea. The archbishop of the Ishgard Orthodox Church, while leading his people in the teachings of Halone, the Fury, rules also as the nation's sovereign.

These highlands lie just outside the Holy See, surrounding a mountain known as The Nail. In A Realm Reborn, this was the only part of Coerthas available to visit, and is covered in snow.

The highlands bordering Dravania, distinguished by the Twinpools: Ashpool and Banepool. The Calamity has since resulted in a severe glaciation of the area, cutting it off from the Central Highlands and freezing over all but a few pools of water.

Though present in version 1.0, it did not return until Heavensward.

"Against the Wind" is the theme used in the Coerthas Western Highlands during the day, while the theme "Black and White" is used during the night. Like all other Heavensward regions, its battle theme is "Melt".

Coerthas was a popular zone in version 1.0, even though it didn't have an accessible city-state. After the additions of the dungeons Dzemael Darkhold and The Aurum Vale, the Ixali stronghold of Natalan, the entrance to the Howling Eye (Garuda's battle arena) and lucrative gathering points, Camp Dragonhead in particular was among the most frequently visited camps in the game. Camp Glory saw its fair share of activity as well, being near many mid-late level quest destinations, such as the Owl's Nest.

Camps Crooked Fork and Riversmeet would see little activity even after the addition of some conclusive quests for the Seventh Umbral Era, such as "Living on a Prayer" and the finale for the Lambs of Dalamud. Like the majority of Coerthas and Mor Dhona, these areas were populated by monsters that far exceeded the level cap of 50, sometimes breaching 90, making them dangerous for wayward explorers.

A tremendous amount of the Coerthas map is missing in A Realm Reborn. While the majority of the Black Shroud, La Noscea and Thanalan are present in the new map (with a few expansions even having taken place), out of five major regions on the original Coerthas map, only one was reintroduced in A Realm Reborn. The Central Highlands, or the center of the old map, are accessible, but both of the "lowland" areas, along with the Eastern Highlands, are currently inaccessible. The Coerthas Western Highlands later returned with the release of Heavensward, where it received a redesign similar to the Central Highlands. The area still features most landmarks from the 1.0 version, including the hamlet Falcon's Nest, which was made into the new Aetheryte Camp of the area following the destruction of Camp Riversmeet in the Calamity.

A Summoner looking at Ishgard.

A party of players fighting a Behemoth in Coerthas.

The Gates of Judgement.

Outside the Steel Vigil.

Inside the Steel Vigil.

Concept art of the Gates of Judgment in A Realm Reborn. 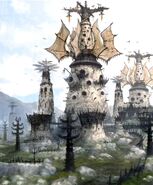 Concept art of the Natalan area.