Cocytus is the divine general who commands the bone-shattering forces of ice. It is only fitting, than, that her expression is cold and her attitude frigid, with emotion being something she knows only the weak possess.

Cocytus is one of the Divine Generals in Final Fantasy Dimensions.

Cocytus first appears in Jinnai's flashback, hidden behind a silhouette while discussing her plans with the Elder of the Fuga order.

Cocytus makes her first appearance to the Warriors of Darkness after they defeat the Elder and his Mind Parasite. She uses Blizzaga on the defeated Elder, encasing him within ice and effectively killing him. An enraged Jinnai lunges at her, but she freezes him with Blizzaga and encases him too in a block of ice. As she approaches the party a black void engulfs them and they vanish. 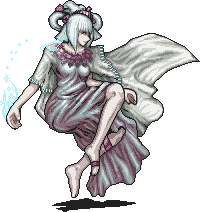 The Frozen Image is an ice-type enemy created in Cocytus's image.

Cocytus appears with an ice-elemental card.