A bird with a poisonous beak that sometimes insta-KO's its prey. It doesn't have the Flutter ability, which may be attributed to the fact that its wings are eyebrows. The least it could do is keep those bad boys better trimmed!

Cockatrice is an enemy in World of Final Fantasy.

A Duo of Three 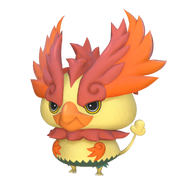