The Cockatrice is an enemy in Final Fantasy VIII.
See also: Cockatrice

Petrifies enemies with its stare. Uses thunder by flapping its wings. Uses Electrocute when fully grown.

Cockatrice uses Electric Discharge as a final attack, but is more known for petrifying attack, which makes it one of the few one-hit KO mobs for a solo character.

Cockatrice is the final Level 1 Monster Card in the Triple Triad card inventory. It can be used for playing the minigame, and for turning into Cockatrice Pinion with Quezacotl's Card Mod. Further refining the pinions into Breaks is the earliest the player can amass the spell. 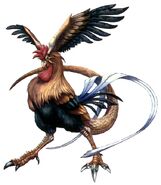