Cavern of Earth, the Mirage Tower, the Sunken Shrine, the Cavern of Ice

Cockatrice's attacks are not strong, but they use a special attack that causes Petrify on one character, usually requiring the party to return to Melmond to heal. It is advised to buy Gold Needles in Elfheim before going to the Cavern of Earth, because they attack in flocks of several flying enemies. The party can be caught off-guard, resulting in a battle against eight Cockatrices at once. Once defeated, they may drop Gold Needles in later versions, which the player can use to cure the Petrify status. Players can flee from this monster if they find the petrify status to be annoying. 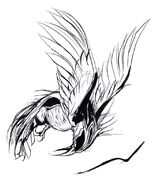