Cluckatrice is an Elite Mark in Final Fantasy XII. The hunt becomes available after the party has returned to Rabanastre after escaping from Barheim Passage, and is the first Elite Hunt given by Montblanc.

It is located in the Giza Plains during the Dry on Gizas North Bank. It is encountered after the player has defeated all other enemies, left, and reentered the area.

A Cluckatrice and four Chickatrices are also fought in the Zodiac versions' Trial Mode Stage 6.

Being the adult form of the Chickatrice, grown Fat and Many in Number thanks to the Rich Abundance of Animal Life available for the Eating in Giza Plains. Recently, their Environs have been sorely taxed by their voracious Appetite, and thus have concerned Villagers posted this Mark. It is rumored that these Creatures first lived in western Lands, and were brought here by a Merchant of little Scruples, who released them into Giza for Reasons unknown.

50%(Chance to spawn under this status)
-

Giza Plains (Gizas North Bank)
Condition: During the Dry, kill all enemies in the area, leave and return

Giza Plains (Gizas North Bank)
Condition: During the Dry, kill all enemies in the area, leave and return

Cluckatrice is difficult to defeat, as it is flanked by three Chickatrices, its young. The Chickatrice will appear first, and when one of them are targeted, Cluckatrice will run out and target the first on the team to strike. It attacks quickly, as it has Haste by default and can slow and petrify characters.

Cluckatrice will respawn if the player leaves the area without defeating all the Chickatrices. The hunt is not considered complete until both the Cluckatrice and all three Chickatrices are defeated.

Using a Quickening combo often works as the easiest strategy. Activating a Concurrence will damage all targets, allowing the player to handle both the Cluckatrice and Chickatrices.

Another strategy is to cast Disable. It may take a few castings to connect, but while the Cluckatrice is unable to attack, the player can easily pick off the Chickatrices. 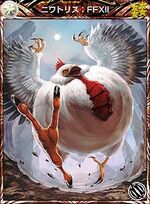 The name is a portmanteau of "cluck," a sound a chicken makes, and "cockatrice." [view · edit · purge]The Cockatrice is a creature from mythology. It is similar to the basilisk in appearance and ability, but also possesses flight. A cockatrice is born from an egg hatched by a rooster and incubated by a toad, and its gaze causes instant petrification.

Retrieved from "https://finalfantasy.fandom.com/wiki/Cluckatrice_(Final_Fantasy_XII)?oldid=3263262"
Community content is available under CC-BY-SA unless otherwise noted.