Cloudy Wolf, also known as Advent Attire, is the attire Cloud Strife wears in Final Fantasy VII: Advent Children that has since become his iconic "alternate outfit" seen in various spin-off appearances. It is designed by Tetsuya Nomura, Cloud's original character designer and the director for Advent Children.

Cloud wears a high collar sleeveless indigo shirt, black pants and boots, and black cloth covering his left leg and arm. He has a shoulder pauldron, and his chest is covered by two straps, held in place by a badge representing Fenrir, a wolf that has come to be associated with him. The outfit incorporates elements from his original outfit, notably the single pauldron, as well as Sephiroth's outfit with the crossed straps and the long piece of cloth around his leg and the single long sleeve that bring to mind Sephiroth's long black coat.

Cloud wears a pink ribbon around his left arm, though it usually stays hidden. When Cloud wears this outfit he wields the Fusion Swords—his new multi-blade combine weapon from the movie—rather than the Buster Sword, his iconic starter weapon from Final Fantasy VII.

Cloud's new design was made with fighting in mind. The concept began with a black robe and was restructured into the final version. The wolf motif from which the attire gains its name is Fenrir. It is the gray wolf that follows Cloud throughout the film, and Cloud wears his emblem on his shoulder pauldron, his earring and gloves, as well as on the background his cellphone. The emblem is also on Barret's, Denzel's, and Tifa's rings. Cloud wears a pink ribbon hidden under the sleeve in remembrance of Aerith Gainsborough. The sleeve also hides his Geostigma infection, which he wants to conceal from his friends. Cloud loses the sleeve during the movie. 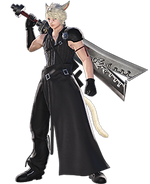 The Advent Attire is the Rank 1 Veteran Reward, awarded to players for subscribing for a minimum of 60 days. Prior to patch patch 4.1, it was the Rank 10 reward for 720 days. It is composed of the Strife Vest, Gloves, Bags, and Boots. All four pieces are level 1 with no attributes, making them suitable only for glamours, and are dyable. 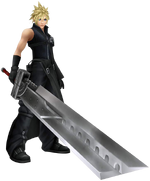 Cloudy Wolf is Cloud's first alternate costume in Dissidia Final Fantasy and Dissidia 012 Final Fantasy. In his EX Mode, Cloud wields the fully assembled Fusion Swords, though for purposes of gameplay he never separates them as he does in the film.

Cloudy Wolf returns in Dissidia Final Fantasy NT as Cloud's 1st alternate costume, as well as being his main attire in the storyline, as Cloud had been summoned from the most recent events in his world; which in this case is after his victory against Sephiroth in Final Fantasy VII: Advent Children.

Cloud in his Cloudy Wolf attire appears as a playable character, called Cloud #2, and is purchasable through DLC.

Cloud #2 possesses an increase in defensive capabilities, forgoing strength in favor of keeping the player from crashing out in music stages. While statistically better than his 1st form, his abilities are more geared toward field stages.

Cloud appears as a playable character. He has two versions, his second being the Advent Children attire. 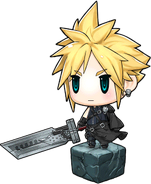 Cloud traveled far and wide, enduring battle after battle and nearly losing himself in the process. Though he saved the planet, he lost much in the struggle, and now he chooses a life of solitude, shunning contact with even his closest friends.

Cloudy Wolf is a Wardrobe Record obtainable from these events: The Lone Wolf's Lament - Cloudy Wolf, Fat Chocobo's Gysahl Exchange: Halloween 2016, and Vow Upon a Star.

Some of Cloud's cards have him wearing the outfit. The Fenrir emblem, also sometimes referred to as "Cloudy Wolf", has appeared in the game in the back of some cards as well.

In Kingdom Hearts II, Cloud is identical to his appearance in Final Fantasy VII: Advent Children, save that Fusion Swords is loosely bound as the Buster Sword was in the original Kingdom Hearts.

Cloud is a playable DLC character. He was released along with Midgar as a stage on December 15, 2015. Players can choose between his Final Fantasy VII garb, and his Final Fantasy VII: Advent Children outfit, complete with a Fusion Swords-style Buster Sword. His third alternate costume removes the sleeve, as shown near the climax of the movie. There also exists an amiibo of Cloud wearing this.

Merchandise of Cloud from Final Fantasy VII: Advent Children depict him sporting this outfit. When the film was released, there were also a lot of official merchandise depicting the wolf motif of Cloud's outfit, often called the Cloudy Wolf. 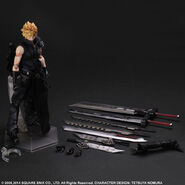 On the Way to a Smile.

The name of the outfit refers to Cloud being stalked by the wolf Fenrir in Final Fantasy VII: Advent Children (heavily implied to be a personification of the guilt he carries over his past failures).