Who disturbs the gloom? Ahhh, mortals from the realm of light. You have not stumbled here without purpose... I am the Cloud of Darkness. What I do not smother, I devour. What I cannot devour, I destroy. The covenant is everlasting. All mortals before the flood of darkness will sink lifeless into the void!

The Cloud of Darkness

She appears in the Crystal Tower storyline as a disembodied voice speaking from the World of Darkness and later appears as the final boss of the storyline.

Scholars who study the voidsent have long striven to categorize the fiends by brawn rather than species. The result is popularly known as the twelve-tiered voidsent hierarchy. The voidsent known as the Cloud of Darkness is doubtless in the highest tier of this hierarchy─hence why Emperor Xande entered into a dark covenant with it. In both strength and size, the Cloud is unmatched. A Voidgate of monumental proportions would be necessary for it to enter our realm. Opening such a rift would, in turn, require a power as massive. Enter, then, the Crystal Tower, and the energy it could produce.

Mortals! You have dared to challenge me, and now must feel my wrath! Did you think to destroy me in my realm? Here, I am eternal! I will smother your light and entomb your bones amongst my shadows!

The Cloud of Darkness

During the Warrior's adventures in the First, they help Ryne bring life back to the Empty by fighting versions of the primals from the Warrior's memories to restore the land's elemental aether. When fix elements were not enough as the Aether was being drained, Gaia is influenced by Mitron to suggest applying darkness aether. Gaia and Ryne work together to create a version of the Cloud of Darkness from the Warrior’s memories to achieve their goal.

The Cloud of Darkness's appearance is based on her counterpart in Final Fantasy III, being a green-skinned female form with yellow tentacles formed from what appears to be a literal "cloud of darkness". A disembodied voice emanates from a Voidgate shaped similar to the NES map sprite of Cloud of Darkness in Final Fantasy III. Despite being considered genderless, the being is referred to as a "she" in the cutscenes and bears an overall feminine form. When summoned through Eden's power in the First, her design is identical to her appearance in Dissidia, and is smaller in size.

A minion based on her, called the "Puff of Darkness" (available as a rare possible reward upon defeating her), is also derived from her depiction in Dissidia.

The Final Fantasy XIV version of the Cloud of Darkness refers to itself in singular pronouns. As an embodiment of the concept of nothingness, she fixates on destruction and intends to flood the world with darkness, as per the covenant.

The Cloud of Darkness is fought at the end of

The World of Darkness. Her attacks derive from both the DS remake of Final Fantasy III, and her moveset in the Dissidia Final Fantasy series.

A Primal version of her, resembling her appearance in Dissidia Final Fantasy NT, appears as boss in

Eden's Promise: Umbra with attacks mostly named after her Dissidia moveset and her title also a direct reference.

"The Reach of Darkness"

"The Reach of Darkness" plays during the battle against the Cloud of Darkness in the World of Darkness. It is an orchestral rearrangement of "Last Battle" and was composed by Masayoshi Soken.

While fighting the primal version during "Eden's Promise: Umbra", the music used is a rearrangement of "Don't Be Afraid" from Final Fantasy VIII. 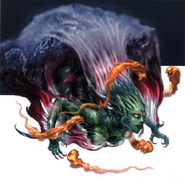 Artwork of the Cloud of Darkness along with the other bosses of the Crystal Tower.

Early test render of the Cloud of Darkness.