Edit
watch 01:20
'Dissidia Final Fantasy NT' – Cloud of Darkness
Do you like this video?
Play Sound

An apparition foretold to appear and send the world back to nothing when the balance between light and darkness is severed. Although appearing as a woman, the true nature of this being remains unknown.

An existence that wishes for all to return to nothingness. She has transcended the abstract and is the embodiment of fear.

The Cloud of Darkness is a Warrior of Chaos in Dissidia Final Fantasy and Dissidia 012 Final Fantasy. She is an entity that appears when the balance between light and darkness is disturbed, and tries to pull the world into the Void. She floats around like a cloud, and attacks with the tentacles wrapped around her body.

. The Cloud of Darkness is depicted as a nearly-nude woman with pale skin and long, white hair. It wears a red cloak that graidnets to black and has a black inner lining, with a high collar that attaches to its wrists and forms a pair of gloves. Two mouthed, yellow tentacles extend from its hips, and its body is covered with various red and black markings. In its EX Mode it loses its cape and most skin, hair, and most of its body coverings turn green while the markings on its legs turn red, mirroring the appearance of its battle sprite

in the final battle of Final Fantasy III.

Cloud of Darkness's first alternate outfit, "Dark Robe", recolors its cape blue. In Dissidia Final Fantasy, its EX Mode is colored a mixture of light and dark green with a dull red for the legs. In Dissidia 012 Final Fantasy, the EX Mode in this outfit is changed to a bright orange and yellow form with blue markings along its legs, reflecting the NES sprite

when it is first fought atop the Crystal Tower as an unbeatable encounter. The Cloud of Darkness is colored primarily orange with blonde hair, green tentacles, and blue markings on its legs.

Cloud of Darkness's second alternate outfit, "Lucent Robe", gives the Cloud of Darkness a white cloak that gradients to lavender, and the stylings of its body coverings are different and are colored primarily lavender, black, and gold. Its tentacles lack mouths and are a lighter shade of yellow. In its EX Mode it retains its cloak and gains red markings along its legs and torso, and the lavender parts of its cloak and body coverings become gold and beige. 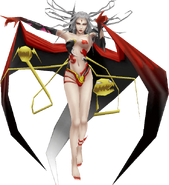 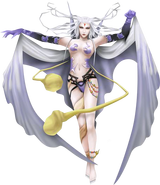 The Void fascinates us. Unlike the world and its tiresome conspiracies, it is eternal.

The Cloud of Darkness is cruel and condescending, having a disregard for human life. Even though it has knowledge on the other villains' plots to end the cycle and obtain power for themselves, it does not care, as it is an emissary of the Void and thus believes all will be consumed regardless of their actions. The Cloud of Darkness is presented as an eternal entity who will always exist to consume the world; defeating it merely sends it into sleep to recover its power and awaken at a future date. Despite her cruelty, she does have her limits, as she willingly provided information to Laguna Loire on how to seal off the source for Manakins because she viewed their existence as an abomination that should not be used even by her fellow Warriors of Chaos.

While holding Terra captive, the Cloud of Darkness questions Kefka as to the value of going through the trouble of enslaving Terra when they have the manikins. Kefka claims the supply of manikins is growing limited and any power they can use is helpful. After Kefka leaves, Terra regains consciousness, still unable to control her power, and the Cloud of Darkness fights her to see Terra's power for itself. The battle leaves Terra unconscious and the Cloud of Darkness declares her too fragile to be of use and wonders if she is fighting for a personal reason rather than for Cosmos, then senses the Onion Knight approaching.

After Cosmos is killed, the Cloud of Darkness speaks to Ultimecia, who tells it that Shinryu has begun to stir, and reveals the dragon is responsible for the cycles of war. The Cloud of Darkness is unfazed by the Emperor's plans, along with Ultimecia's time compression scheme, and focuses only on the eternal Void. Later, when the Onion Knight confronts it, the Cloud of Darkness asks why he and the other warriors are still moving on with Cosmos gone and there being nothing for the boy to protect.

After losing, the Cloud of Darkness tells the Onion Knight it is too late, claiming they cannot stop the inevitable. He replies he is listening to his heart and will not run away, because the determination of his friends encourages him to move forward. The Cloud of Darkness comments that living creatures are fascinating, and that it will be waiting in the rifts of the Void as it disappears into the darkness, going back to sleep.

Cloud of Darkness's fighting style is Bane of Life. Its Bravery attacks are limited, but it can change up their effects based on when the player presses the Circle button the second time, giving it a larger array of Bravery attacks than its moveset would seem to indicate. However, as a whole they are not very powerful and offer more supportive effects. The Cloud of Darkness' specialty is a variety of HP attacks that cover numerous tactical options, letting her rapidly drain her opponent's HP. However, the Cloud of Darkness moves a bit slowly and many of her HP attacks have a fair start-up time, so she can have trouble finding openings to land hits.

In Dissidia 012 Final Fantasy, it is fought in Clues, An Undocumented Battle, Wisdom or Courage?, and Conclusion of the Cycle chapters of Story Mode.

See also: Gameplay differences between Dissidia and Dissidia 012 for Cloud of Darkness 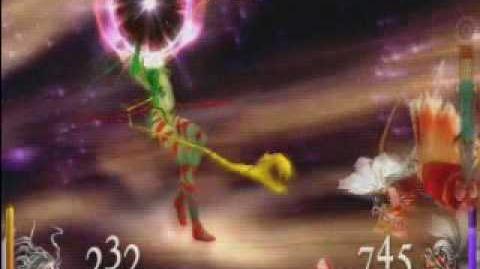 The Cloud of Darkness's EX Mode is Flood of Darkness, where it loses its cape and its skin turns green, like its in-game appearance from Final Fantasy III. When in EX Mode, the Cloud of Darkness gains ability "[Null] Particle Beam", which lets it cancel out the lag after it attacks by using another HP attack, allowing it to attack faster in succession and combo its attacks.

Its EX Burst, Ultra Particle Beam, has it attack with a smaller beam of energy, before summoning a large orb of darkness. The player must hold 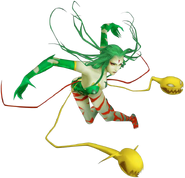 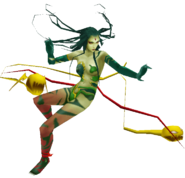 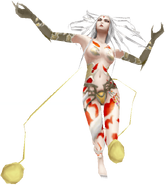 Tetsuya Nomura has stated that when he joined the company, he saw Yoshitaka Amano's original design of the Cloud of Darkness that was not featured in Final Fantasy III, and decided to use the design in a future game once he got the chance.

The Cloud of Darkness is one of only three characters in Dissidia 012 Final Fantasy to have an outfit modified, the other two being Jecht and Tidus. 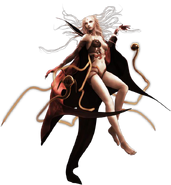 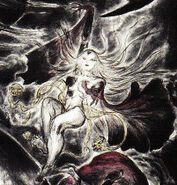