The Cloud of Darkness's default player name is Nameless Wraith, and its manikin counterpart has been renamed Illusory Apparition.

Cloud of Darkness's default outfit, "Abyssal Abhorrence", is an updated version of its original design by Yoshitaka Amano. The main body now takes on "empty" eyes when performing certain attacks. This is more noticeable during its pre-battle and post-battle poses. The first alternate coloration of this outfit is an updated version of its "Dark Robe" attire from the PlayStation Portable Dissidia games. The inlay of its cape is now purple, and the rest of its body coverings are blue, matching the color of its cape. The second alternate coloration is an updated version of Cloud of Darkness's "Lucent Robe" attire from Dissidia 012 Final Fantasy. The design of its body coverings and Fey Tentacles are now identical to its base appearance, but with the tentacles changing depending on which weapon is equipped.

The first alternate costume is "Lucent Robe", a revamped version of Cloud of Darkness's second alternate costume from Dissidia 012. The Cloud of Darkness's main body is given a more feminine appearance, with longer and straighter hair colored white to pink, and a white tri-shaped frame that replaces the cape. The body itself changes, with the eyes remaining red, the white clothing vaguely resembling a robe with gold accents, additional blue body markings on its left side, and demonic gray legs. The first alternate coloration recolors the main body's hair black to purple, the frame yellow, and the clothing black with white accents. The second alternate coloration recolors the main body's hair white to purple, the frame black, and the clothing white with silver accents.

The second alternate costume is "Void Ruler", a revamped version of Cloud of Darkness's EX Mode appearance from Dissidia and Dissidia 012. 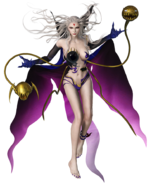 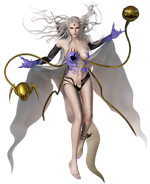 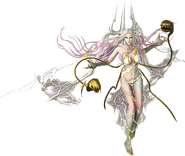 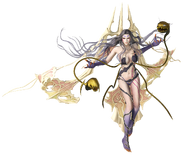 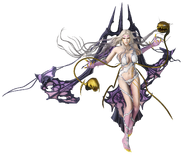 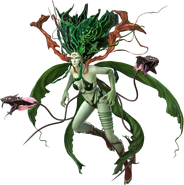 The Cloud of Darkness's weapons are its tentacles. According to the Cloud of Darkness's museum profile in the PSP games, the tentacles have minds of their own and the main body speaks for all three, thus referring to itself as "we". Its alternate weapons have not appeared in any Final Fantasy game prior, and are original for the Dissidia series. 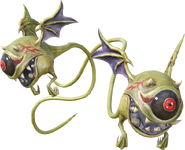 The Cloud of Darkness isn't seen again until the Warrior of Light, Cecil, and Noctis arrive at Spiritus's domain to communicate with Materia via a communication portal. After Spiritus urges Materia to set aside their differences for the sake of the greater good, the Cloud of Darkness explains to Materia about the dragon god Shinryu and the planesgorgers he summons, saying the world will not last long if they are not all defeated. Materia agrees, and implores them to make a final stand together.

The Cloud of Darkness participates in the final battle, assisting Ultimecia in her onslaught against Terra and Y'shtola. The two are cut off by Shantotto just as they are about to combine their magic into one powerful spell. When Shinryu awakens, the Cloud of Darkness turns its attention to fighting the dragon god, ultimately defeating it with everyone's combined efforts. With the battle over, the Cloud of Darkness returns to its own world, leaving behind a crystal imbued with its essence for Spiritus to use in its place.

Type: Vanguard - After a certain amount of time, Cloud of Darkness becomes flooded with darkness, allowing its Bravery attacks to be buffed when

is held. Unleashing a charged attack resets the timer.

The Cloud of Darkness is a close-range fighter who relies on various combos of its tentacles to thrash opponents. Its ranged attacks are various forms of Particle Beam, manifesting in waves, projectiles, and beams of dark energy. Its unique gimmick is that over time it will charge itself with darkness, which will happen regardless of how much it is attacking or being attacked. At this time it can hold the

button when using a Bravery attack to power it up, variably increasing its damage, knockback, range, and other properties. Its EX Skill is similar to EX Mode in the original Dissidia, allowing it to use the charged version of its Bravery attacks at any time for a short period. 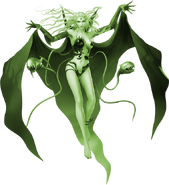 Sketch for the reveal of Cloud of Darkness. 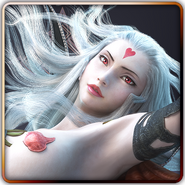