An ex-SOLDIER whose true memories have been lost, Cloud joins the rebel group AVALANCHE's fight against the Shinra Company in an attempt to save the planet, and discover more about his own identity.

Cloud is a recruitable character in Final Fantasy Record Keeper. He joins the party after clearing Mako Reactor No. 5 for the first time.

Cloud is also a character in the game's Record Dungeon content, serving as a guest party member whenever Tyro and his friends are teleported into Final Fantasy VII records.

During the opening events of the Record Dungeon scenario, Tyro and Elarra are whisked away by the first corrupted painting to bombing mission of Mako Reactor 1. Due the painting manipulating history, Tyro and Elarra are made AVALANCHE recruits and fight alongside Cloud as soon as he gets off the train at the reactor's station. Teaming with Tyro and Barret, Cloud manages to take down Guard Scorpion guarding the reactor and successfully destroys the facility.

After the mission, Cloud and Tyro are ambush by Shinra forces, and are forced to engage in combat with them. Being surrounded by Shinra troops, Cloud, Tyro, and Elarra jump onto the coming train below and make their escape. However, Tyro and Elarra are ejected from the painting, leaving Cloud's fate unknown; however Tyro suspects Cloud successfully managed to escape unharmed like they did.

During the "Shadow of Suspicion" portion of Volume 1, Tyro and Elarra, now joined with Biggs and Wedge, are reunited with Cloud the moment they were separated after the events of the Mako Reactor 1 bombing. The next day, Cloud, Barret, Tifa, and Tyro's group travel to destroy Mako Reactor No. 5. Before they can successfully make an escape, the group encounters President Shinra, who sends the Air Buster to attack them. After defeating the Air Buster, Cloud and Tyro's party are thrown into the slums below by the machine's explosion.

At the request of Elmyra Gainsborough to keep Aerith out of further trouble, Cloud and Tyro's group leave Aerith's house in the middle of the night. However, they find Aerith waiting for them outside and demands to travel with them, Cloud and Tyro reluctantly agree to her request.

Learning that Tifa went to Don Corneo's manor in the Wall Market, Aerith and Tyro's friends aid Cloud in his mission to crossdress to sneak into the facility. Managing to collect all the necessary items, Cloud is somehow selected by Corneo as the winner. Cloud reveals that it was all a ruse, and threatens to attack him with his sword. However, Corneo manages to open his trap door, throwing both Cloud and Tyro's friends into the sewers below, and are attacked by Corneo's pet, Aps.

After defeating Aps, the group arrives in Sector 7, finding Barret fighting against Shinra's troops. Cloud and Tyro friends gather at the top of the Plate Support and join forces in an attempt to stop Reno from dropping the Sector 7 plate. However despite their attempts, Reno manages to escape and Tseng reveals that he has kidnapped Aerith. Realizing that there is no way to prevent the plate's collapse, Cloud and Tyro are carried away by Barret and Biggs to the slums below. With the group ejected from the VII records once again, Tyro and his friends wonder of Cloud's group's fate.

Now following the Shadowsmith, Tyro's party is reunited with Cloud and his friends during the events of "The Heretics" chapter of Volume 2. At Aerith's house, Cloud and Tyro's groups learn of Aerith's lineage as the last of the Ancients, and come to the decision that they have to save her from Shinra Headquarters.

After storming through the building, Cloud and the party find Professor Hojo attempting to force an experiment between Aerith and Red XIII, however they are able to save the two in time. Cloud decides for the newly formed group of eight to split up, leaving Biggs, Wedge, and Barret to take Aerith to safety. Before Cloud's party can escape, they are immediately attacked by Sample H0512, leaving Cloud, Tyro, Elarra, Tifa, and Red XIII to engage in combat with the creature. After defeating Hojo's experiment, the entire group is arrested by Rude and taken to President Shinra.

The evening after being sentenced to prison by the President, Cloud and Tyro's groups find the prison covered in blood, with all Shinra employees slain. At the President's office, they find President Shinra murdered by Sephiroth, and meet with Rufus Shinra. Cloud and Tyro decide to engage in combat with Rufus, while Elarra and the others find a way to escape from the building.

After Elarra's party finds a means of escape, Cloud and Tyro find the Hardy-Daytona motorcycle, breaking through the building's windows onto the Midgar Highway. The party is then attacked by Shinra soldiers and the Motor Ball, but both groups are able to defeat the threats. Shortly after defeating the Motor Ball, Cloud and Tyro's groups are separated due to Jord Svartr's interference. Cloud and his friends decide that they must carry on their search for Sephiroth outside of Midgar, with the hopes they will run into Tyro's party again in the future.

Cloud possesses high HP and Attack growth, and fair Defense and Speed. His Resistance score is also slightly above average for a physical fighter. Cloud is initially proficient in Combat and Heavy-class abilities, but can unlock access to lower-tier Knight abilities and high-tier Spellblade abilities through the use of Record Spheres. Cloud has the potential to wield some of the most powerful attacks, whether single-target or multi-target.

Like other main protagonist characters, Cloud is frequently one the first to receive the game's newest Soul Break types. His Soul Breaks are often associated with wind and dark elements.

Should players obtain his Ultra Cross-slash Soul Break from the Record Lab exchange shop, Cloud can easily break the default damage cap on most enemies weak to wind and dark-elemental attacks. When paired with wind Chain Soul Breaks and the correct buffs, Cloud has the potential to unleash twenty individual attacks up to 20,000 damage when using his Sonic Braver Arcane Overstrike. Cloud is often an excellent choice to tackle the holy and earth-elemental oriented Magicite-content bosses. 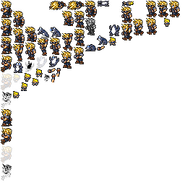 Japanese event banner for "A Night to Remember".

Global event banner for "A Night to Remember".

Japanese event banner for "Vow Upon a Star".

Global event banner for "Vow Upon a Star".