Cloud's first alternate costume is "Cloudy Wolf". This is an updated version of his "Cloudy Wolf" attire from the PSP Dissidia games, based on his attire in Final Fantasy VII: Advent Children, and is Cloud's main attire in the story of Dissidia Final Fantasy NT. Its first alternate coloration colors his shirt blue, and his leg cloth gains a camouflage pattern. The second alternate coloration colors his shirt purple, and his leg cloth gains a Fenrir emblem pattern.

His second alternate costume is the "Sky-Soarer", an updated version of his "Kingdom Hearts Gear" attire from Dissidia 012 and the first Kingdom Hearts, where he wears Vincent Valentine's red mantle and bronzed gauntlet over his SOLDIER fatigues, and possesses a black demonic wing on his left side. The outfit has gained a metal plate in three segments over his right hip, with the segments from the top being bronze, gold, and silver. The first alternate coloration recolors his mantle green, his SOLDIER fatigues brighter purple, and his wing brown. The second recolors his mantle black, his SOLDIER fatigues gray, and his wing white. 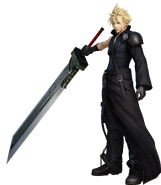 Cloud's personality a mix between his created "SOLDIER" personality and his true personality from Final Fantasy VII. On the surface, Cloud remains calm and reserved, speaking only when necessary and being focused on the task at hand, which has earned him respect from the other warriors though they commonly mistake him for being gloomy and brooding.

Cloud equips greatswords. Nearly all of his weapons can be equipped by him in the original Final Fantasy VII, with two exceptions being the Fusion Sword from Final Fantasy VII: Advent Children, and the Kingdom Hearts version of the Buster Sword.

His default weapon is the Buster Sword, his iconic weapon from Final Fantasy VII, using the original design. Cloud's first alternate weapon is the Hardedge, which is considerably larger than the original appearance and is equal in size to the Buster Sword, retaining its inscribed kanji from its official art. His second alternate weapon is the Fusion Sword, originally from Advent Children, and Cloud's main weapon in the story of Dissidia Final Fantasy NT. His third alternate weapon is the Force Stealer, designed with a more mechanical and sleeked look, particularly the steel-jointed hinge wings crossguard. This blade is thinner with a symmetrical beveled grove pattern, and has a small red orb imitating materia in the base. The fourth alternate weapon is the Organyx which, like the Force Stealer, is more mechanical and industrial in design, making it out to be a composite constructed weapon. The main blade is now a simple steel silver, thicker and with a smaller triangular gap on the blunt side fastened into an L-pattern slot and held in place with bolts and rivets on a track slide marking the rim of the mouth of the base section. The golden guard on the base section has a large bolt centerpiece that appears to hold the blade's tang in place with the handle. Cloud's fifth alternate weapon, the Buster Sword (KH), is based on the Kingdom Hearts variation of the iconic sword, in which the weapon is wrapped in bandages.

Cloud also has a bonus alternate weapon, the Nail Bat, available to players who pre-ordered or purchased the "Day One Edition". Its design has being updated from its original appearance.

Cloud is summoned as a warrior of Materia to fight in the new war. At Materia's tower, Cloud and the other champions are informed that they must fight each other to produce enough energy to sustain the existence of World B. After their meeting is interrupted by Spiritus, Materia orders her champions to fight his forces.

Cloud sets off alone to find Bartz, as he was absent during their meeting with the goddess. Traveling to the Interdimensional Rift, Cloud saves Bartz from Sephiroth's ambush while the latter was distracted by his fight with Exdeath. The four battle until planesgorgers arrive to devour the realm. Before they retreat, Sephiroth tells Cloud that both parties' goals will eventually align. Fazed by his cryptic warning, Cloud and Bartz fall through a portal that appears beneath them.

Arriving in an illusion Eden gateway, Cloud and Bartz properly reunite and reveal that they each hold memories of both their homeworld and the previous cycles. As they return to Materia's tower, Cloud briefs Bartz on Materia's identity and the reason they were summoned back to World B. As the pair ends up lost, they decide to wait in Alexandria for help just as Shantotto drops from another portal. Cloud enlists her assistance to return to Materia's domain. As Bartz does not recognize Shantotto from the previous cycles, Cloud explains she is their new ally. As they depart the area, Cloud realizes that if they eliminate Spiritus as they did with Chaos, they could end the new conflict, but does not voice his opinion, much to Bartz's confusion.

At Materia's tower, Cloud introduces Bartz to her and informs her of the planesgorgers' presence. Cloud is taken aback when she asks why her champions do not simply excise them. Shantotto steps in and opens communications with Spiritus. After being informed of the situation, the heroes and antagonists agree to stage a battle against each other to lure out Shinryu, the true cause for the loss of energy in World B. In the ensuing fight, Cloud and Bartz come to Squall's aid who is being attacked by Jecht and Golbez. Cloud protects Squall when Golbez sends a barrage of flying rocks at him before directly engaging him. Once the battle energy summons Shinryu, Cloud participates in a joint attack against the dragon, but is repelled as Shinryu reveals his true form in a potent burst of power. Once the warriors regain their composure, they work together to defeat Shinryu.

The moogles give Cloud a crystal to host his memories for Materia to use in the new cycles of wars. With a crystal doppelgänger of himself to serve on Materia's behalf, Cloud is sent home.

Type: Vanguard - Most of Cloud's skills can be charged up to two extra levels by holding down the skill button, and charging can be canceled by sidestepping.
EX Skill: Limit Break - Enhances defense, shortens charge times, strengthens some HP attacks, and gains more time in which to unleash Cloud's moves. 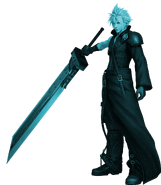 Cloud from the arcade tutorial.

Cloud versus the Warrior of Light. 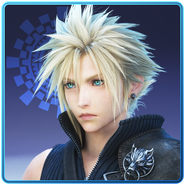 Cloud alongside the other 14 main characters.