Knights of the Round (Cloud)
Ifrit (Cloud #2)

Knights of the Round (Cloud)
Bahamut (Cloud #2)

Once a member of SOLDIER, the elite fighting force of the Shinra company, this blunt young man with his haughty words and deeds often invites animosity from those around him. While lending his strength to the anti-Shinra terrorist group AVALANCHE, however, he learns that the madman who stole his home from him is alive and so he sets out to hunt down Sephiroth for the final resolution to their battle.

Cloud's most obvious trait is his high strength, coupled with abilities to assist in defense and agility, makes him a solid starting party member. His main purpose, however, is to tackle the many bosses encountered in Dark Notes, which are mandatory to complete to obtain more playable characters. With his ability to boost his strength, Cloud is almost a no brainer for taking out many enemies in a row. As a downside, he possesses the lowest luck of all party members.

It all started with the Nibelheim Incident. For Cloud, confronting his own past will embroil him in merciless conflict. Finding out who he is, seeing reality from illusion... In the end, it will all be to save the Planet.

Cloud is a default playable character. If the player did not select him among their party of four, he can later be unlocked by collecting Yellow Crystal Shards.

Cloud is a great beginner's choice for new players, as his Strength is his most notable trait along with his balanced selection of abilities to both further damage enemies while also boosting the parties defenses. He's also one of the few characters that can innately summon the Knights of the Round, further cementing him as a solid hero for Quest Medleys. As before, a minor downside is his low Luck, which can result in him being unable to avoid damage in music stages.

Type: Strength
Summon: Knights of the Round

Cloud in his Cloudy Wolf attire appears as a playable character, and is purchasable through DLC.

This version of Cloud possesses an increase in defensive capabilities, forgoing strength in favor of keeping the player from crashing out in music stages. While statistically better than his 1st form, his abilities are more geared toward field stages. It's up to the player to decide which version of Cloud they prefer, with his original self focusing on offense, while his 2nd variation in defense.

His Limit, Omnislash ver. 5, deals damage to boss-type enemies in direct proportion to Strength and Agility. 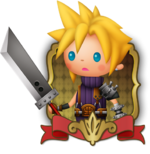 Cloud is one of 28 default playable characters.

Type: Strength
Summon: Knights of the Round

Cloud's Cloudy Wolf form is a playable character, and was available to players if they collected 250 play points from March 1, 2017 to March 31, 2017.

His Limit, Omnislash ver. 5, dealing damage to boss-type enemies in direct proportion to Strength and Agility.