My reality is mine alone.

Cloud Strife is one of the heroes fighting for the side of Cosmos in Dissidia Final Fantasy. An acerbic young swordsman with glowing eyes. Wielding a blade as large as he is, he deals terribly powerful attacks that send foes flying. Though considered composed in the eyes of his comrades, Cloud often questions the reasons for fighting and the purpose it would serve, and struggles to understand them. During the war, he is also forced to fight his archenemy, Sephiroth, who appears to manipulate him into fighting.

Cloud wears a dark purple uniform, a metal pauldron from which bolts stick out, a brown belt with a SOLDIER symbol on it, and black boots. His hair is spiky blonde and his eyes are bright blue, the sign of a Mako-infused SOLDIER. He carries the Buster Sword with him throughout the game, and considers the weapon to be important, an opinion inherited from his best friend and mentor Zack Fair, who possessed the sword before passing it on to Cloud. It transforms into the Ultima Weapon when he enters EX Mode.

Cloud's alternate costume is his outfit from Advent Children, along with the main blade of the Fusion Swords (also known as the First Tsurugi) as his weapon, and the completed assembly (six swords interlocked together) for his EX Mode. He now wears a front zip turtleneck sweater vest, compilation hairstyle, a black half-skirt protecting his left leg, different black boots, new pauldron with a Fenrir motif in front, and a single sleeve covering his left arm, originally worn to hide his Geostigma infection. His crystallized version, Imaginary Soldier, is of a blueish hue.

Cloud's Crystal resembles a Materia from Final Fantasy VII, and may be a homage to White Materia, though it is a deeper shade of green. It continuously glows, as a Materia in the middle of casting a spell.

After a battle between the forces of Cosmos and Chaos, Cloud finds himself with Firion, Cecil, and Tidus, who view him as a calm and collected figure, though Cloud later admits that while outwardly calm, he was actually the most anxious. Even though he is clearly on the side of Cosmos, he still questions his purpose for fighting the forces of Chaos, as well as what purpose it would serve him to do so, and asks his three companions what they are fighting for. Cecil says he would like to know the reason himself. Tidus declares that he has a score to settle with his father Jecht, while Firion simply wants to see if Cloud can find his own answer before thinking about it.

Sometime after, Cloud finds Firion alone and Firion produces a rose that he uses as a metaphor for his dream of a peaceful world that is free from oppression, which is his source of motivation, and Cloud challenges him to a sparring match to see how strong that dream is. Afterwards, Cloud grows increasingly worried that he may not have a dream at all and confides in Cecil for answers. Just then, Firion and Tidus appear and the three agree to help Cloud- on a condition that he will tell them everything, which he promises. He then decides to step out of the group and journey on his own, but promises that he will rejoin them later on.

While continuing alone on his journey, he encounters Sephiroth, who prepares to duel him. When Cloud refuses to fight him, on the grounds that it would have no meaning, Sephiroth reveals to Cloud that he holds Firion's rose, indicating that he has been dispatched. This enrages Cloud, who chases Sephiroth all the way to the Planet's Core, where the villain repeatedly calls him a puppet who is easily manipulated and has no motivations of his own. Cloud declares he doesn't need anymore given answers and came of his free will and the two engage in an epic duel. After that, Cloud receives both his Crystal and Firion's rose, and Sephiroth says it was through his manipulations that got Cloud this far. Cloud says he will decide his own path even if it means giving in to his fate of fighting, which is for the promise he made to his companions earlier before separating from them.

After his fight with Sephiroth, Terra arrives at the Planet's Core and begins to lose control of her Esper powers. Cloud watches, and even though she warns him to stay away, Cloud decides to step in and "battle" her without a word of explanation, but even Cloud who can easily defeat Sephiroth, is unable to match, though he is able to calm, Terra's incredibly potent power. After the battle, Terra realizes that his intent was to provide her an "outlet" to vent some of her power, allowing her to regain control. He battled her because he didn't want to see her suffer like that, and that he didn't know what else to do, and when she kindly thanks him, he says that he doesn't deserve her thanks because he doesn't know if what he did really helped her. In turn, Terra helps him by assuring him that he really did help her. Terra then explains how she and the Onion Knight were separated after being ambushed by Kefka, and Cloud joins her to look for their ally, realizing that he can still help even in his indecisiveness, and thanks her for helping him realize that. During the search, Cloud reveals that he also suffers from amnesia, and presents her with Firion's rose, explaining Firion's dream for peace. Though neither warrior can figure out their own reason for fighting, Terra says they should both resolve to fight their hardest to protect everything they care about, and thus both realize their own dreams. Later, at the Magitek Research Facility, the pair confronts Kefka, who tries to get Terra to give in to her Esper powers and cause senseless destruction, but she refuses. Kefka then summons the Cloud of Darkness to attack them, at which point the Onion Knight returns, and he and Cloud together fight the Cloud of Darkness while Terra has her final showdown with Kefka. After Terra obtains her Crystal, the three go on to rejoin the other warriors.

Much to Firion's suprise, Cloud, who arrived after helping Terra, and Tidus, who had just defeated his father, Jecht, join him at the last minute when he is attacked by the Emperor, declaring that they could not leave him alone for too long and that they all share a dream. The Emperor attempts to attack Firion again, but Cloud and Tidus deflect each blow, easily outnumbering their enemy, who then taunts Firion to come to his stronghold before he flees. Firion decides to go face the Emperor alone in order to end this, and Cloud gives back the Wild Rose, having regained his dream to fight for and expressing his desire to see Firion's dream continue.

With the crystals in their position, the Warriors of Cosmos return to Cosmos' Throne in an effort to restore the goddess's strength only to have Chaos incinerate her before their very eyes. But, with the last of her strength, Cosmos prevents the heroes from fading back to their worlds, giving them one final chance to strike back at Chaos and end the war for good.

With Cosmos' strength dwindling, Cloud faces his nemesis Sephiroth once again. Though his enemy was strong, Cloud perseveres and emerges victorious. After the battle, Sephiroth asks Cloud what drives him to do battle, Cloud simply answers that he drove himself to fight, and that he had no further ties with his enemy, but Sephiroth counters Cloud's words, stating that his shadow will be forever in his heart, and that he will always be in control of him, no matter what he may think. Cloud tells him to leave him alone after he disappears and said he never wants to see him again. Shortly after that, he and the other nine heroes band together to defeat Chaos. At that battle's end, Cloud finds himself on an open field near Cornelia Castle, along with the other nine warriors, where they find each other parting ways to their respective worlds, with Cloud returning to The Planet with Crystal in hand.

Cloud is described as a Buster Basher, and specializes in knocking away opponents with strong melee attacks. However, his ranged capabilities are highly limited. He also uses his Limit Breaks from Final Fantasy VII as HP attacks, with the exception of Blade Beam and Climhazzard, which are Brave attacks. Unfortunately, his ground speed leaves a lot to be desired, together with his friends, Cecil and Terra.

Cloud is fought in Destiny Odyssey VI and in Distant Glory: Heroes. 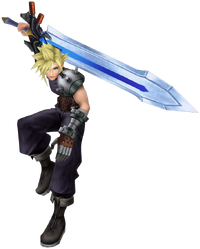 Cloud's EX Mode, Equipped Ultima Weapon, transforms the Buster Sword into the Ultima Weapon (in his alternate costume, his EX Mode is called The power of mako and he gains the fully assembled Fusion Swords/First Tsurugi), and grants the Regen status, as well as the Guard Break ability, which prevents his attacks from being blocked (although there is an exception; Exdeath's All Guard blocks this ability). Also, during EX Mode, Cloud's damage output depends on the amount of current HP he has in relation to his maximum HP; the more HP Cloud has, the more damage he will do. This is the exact same way that Cloud's Ultima Weapon functioned in Final Fantasy VII.

to completely fill up a Limit Break bar, allowing Cloud to bombard opponents with fourteen sword slashes leading up to a stronger fifteenth slash. Failing to follow the requirements will have Cloud doing fewer hits.

Cloud can use mostly light equipment as well as swords and giant swords.