Cloud Staff (雲の杖, Kumo no Tsue?) is a recurring weapon in the series.

Cloud Staff is the second strongest staff, providing 48 Attack, 8 Evade, +7 Magick, and 34 CT. It requires the Staves 4 license to equip, increases Water-elemental damage by 50%, and can be bought at Balfonheim Port for 8,000 gil, dropped from Oversoul (1% chance), found as treasure at Cerobi Steppe (The Terraced Bank) or Ridorana Cataract (Colosseum), or from the Bazaar from the "Mystic Staff" set.

In the Zodiac versions, it instead provides 49 Attack, 8 Evade, +7 Magic, +3 Speed, and 34 CT, increases the damage of Lightning, Wind, and Water-elemental attacks by 50% and requires the Staves 5 license for 65 LP. It can be found as treasure at Cerobi Steppe (North Liavell Hills) or Great Crystal (Kabonii Jilaam Pratii'vaa), from the Bazaar from the "Mystic Staff" set, or uncommonly stolen from Dheed in Trial Mode Stage 67. It can be sold for 6,700 gil. 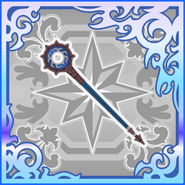 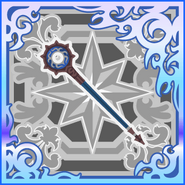 [view · edit · purge]In meteorology, a cloud is an aerosol comprising a visible mass of minute liquid droplets, frozen crystals, or particles suspended in the atmosphere above the surface of a planetary body.