Ultima Weapon
Cloud, initially known as Ex-SOLDIER, is the main playable character in Final Fantasy VII. He wields broadswords and, leading the party throughout the majority of the story, has the best overall stats excelling in both Strength and Magic. Cloud can be played as a traditional Warrior class character in Final Fantasy VII, and though his well-rounded stats allow him to be versatile and built towards any playstyle, Cloud's Limit abilities all rely on his physical damage.

Cloud's Limit Breaks have since become his trademark attacks throughout his numerous other appearances, and his default Buster Sword has become his iconic weapon alongside his ultimate weapon, the Ultima Weapon.

Cloud is the first character the player controls in the game, and is known as "Ex-SOLDIER" (元ソルジャー, Moto Sorujā?) until the player names the character during a scene after the first battle. Cloud also has separate stats stored for an appearance in a flashback.

Cloud is best placed in the front row to ensure solid attack power despite being the second strongest magic caster after Aeris. His Limit Breaks are among the strongest in the game, but Cloud learns them slower than anyone else.

Cloud is the only character to have two battle models: his regular model is used throughout the majority of battles, but a hi-res, more detailed version is used in the scripted battle that takes place after the final battle. Cloud's victory pose is to pump his fist twice and spin his sword in one hand and place it on his back. This maneuver has become iconic.

Cloud's stats are well rounded and he is among the characters with the highest values in every stat, notably Strength and Magic. His lowest stat is his Speed, which is still about average. Stat growth is somewhat random, with characters having a chance to gain a boost in stats when they level up, but how much they get has a random element in deciding it.

He starts at level 6 but levels up to 7 in the first battle; this is an allusion to the number 7. At the start of Final Fantasy VII, if one opens the menu and checks Cloud's status, the amount of experience needed to level up to Level 7 is 35 EXP. However, upon winning the first battle, that amount decreases to only 6 EXP. 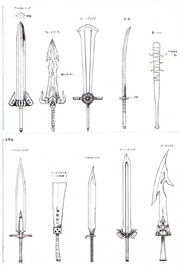 At the start of the game, he begins with his most iconic weapon, the Buster Sword, a massive two-handed broadsword he wields in Final Fantasy VII and most of his spin-off appearances. This weapon has two linked Materia slots and is used by Cloud throughout the first act, "Banner of Revolution", in Midgar, unless the Hardedge is stolen from SOLDIER:3rd enemies. Cloud can equip katanas and other greatswords as well, though he continues to wield the Buster Sword in cutscenes.

Ultima Weapon, Cloud's strongest weapon, sports the strongest Base Attack stat, and increases in power the higher Cloud's HP is. Due to Ultima Weapon's power, it should be Cloud's default weapon once obtained. The weapon also provides a strong Magic stat increase and eight linked Materia slots, meaning it can improve Cloud's strength at spellcasting also. One strategy is to link a powerful Command Materia or non-elemental Magic Materia (such as Ultima) with HP Absorb to constantly heal Cloud to ensure that he is always at full HP and thus dealing optimal damage with Ultima Weapon.

Among his arsenal is the Apocalypse, one of only two equipment pieces in the game to give triple Materia growth, the other being Cid's Scimitar. Apocalypse is also one of two weapons that does an overall growth of greater than eight, the maximum amount of Materia in any weapon or armor. Apocalypse has three triple Materia growth slots, meaning it does the work of nine Materia slots. The only other weapon that offers an overall Materia growth of higher than eight is the Javelin, a weapon belonging to Cid. As such if the player is looking for the most efficient way to develop their Materia, a party with Cloud equipped with the Apocalypse and Cid equipped with the Javelin is the most desired set up.

Cloud also has access to is Yoshiyuki, which increases attack power by the number of dead allies in the active party.

Cloud's Limit abilities are all based on his physical damage, meaning the player should improve his Strength or his equipped weapon's Attack stat to deal more damage with them. Most of Cloud's Limits are a single attack dealing damage at greater power, though Meteorain and Omnislash deal multiple hits. Omnislash can deal 15 hits, giving Cloud the ability to potentially hit an enemy for 9999 damage 15 times in one turn if he is using a powered up Ultima Weapon. Though Finishing Touch can kill all enemies not immune to death, it will only hit a single enemy not immune, meaning Omnislash is much stronger against single targets.

Because Cloud has the Strength and the second-highest Magic stat, he can be built in any way the player desires, either towards magical damage or physical damage. Cloud can benefit greatly from Magic Materia to deal damage with more powerful spells, though the only drawback to this is doing so will reduce his Strength, slightly reducing the power of his Limit abilities. Summon Materia can also benefit considerably from Cloud's Magic stat. However, Cloud can also take advantage of Command Materia, such as Slash-All and Double Cut, in order to take advantage of physical damage. Cloud is also a particularly good candidate for the Enemy Skill Materia; many of its abilities rely on Cloud's Magic stat, and Cloud is almost always in the party and thus will encounter many enemies to learn skills from.

In later levels, Cloud remains versatile and benefits from all types of Materia. However, building Cloud strongly towards magical damage can improve his Magic stat significantly while weakening his Strength, whereas doing the reverse while give Cloud few spells to take advantage of. This means he is optimal when given a mix of both.

Cloud benefits greatly from the HP Absorb Materia, particularly to keep him at high or full HP for Ultima Weapon's damage. Cloud is also a good choice to give the Phoenix Materia paired with Final Attack, due to his high HP making him harder to kill and high Magic stat improving Phoenix's damage when used.

Cloud is the party leader throughout most of the story, except briefly in the act 1 chapter 9, "The Nightmare Beginning Anew", in which Cloud leaves the party to fight Rufus alone while Aeris leads another party, and throughout act 3, "Turmoil", during which Cloud is in a hospital in Mideel. At the end of this act, Cloud rejoins the party as the leader. He can be out of the battle party during the Battle Arena minigame and during the Bizarro∙Sephiroth multi-party battles.

Cloud must be the leader to snowboard at Icicle Inn and to enter the Great Glacier. The Gold Saucer is closed during the time he is not party leader. Cloud's return to party leader enables the beginning of the Lucrecia's Cave, Key to Sector 5, Final Heaven, and the Shinra Mansion flashback sidequests. It also coincides with the reopening of the Gold Saucer, where the Wonder Square GP prizes are updated, the Snow Game becomes available, the Shooting Coaster has a new one-time prize, the Battle Arena's enemies and prizes are updated, and Chocobo Racing with the player's Chocobos becomes available, also opening up the Chocobo breeding sidequest.

If Cloud, Tifa, or Aeris are in the party during the Wutai stolen Materia sidequest, Corneo will react to their second meeting, otherwise he will be unsure of his pursuer's identities. Cloud says Don't tell me you forgot? despite being identified. 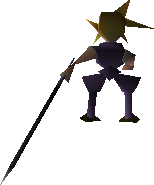 Cloud in a wheelchair.

The Cloud used in the Nibelheim Incident flashback, more commonly known to fans as Young Cloud or Zack, has stats and could technically level up like a normal character, even though this is not possible in a normal game.

This Cloud shares his stat growth with Cait Sith, and has a unique Exp curve. His Exp curve is technically also Barret's Vitality curve, although in reality this does not mean much because both stats grow in a different way, with Exp only using half the values a normal stat does. Since this curve is not specifically designed for Exp, his growth starts out roughly twice as slow as a normal character, levels out between level 50 and 60, and then ends with a roughly a third of the standard max Exp for level 99.

Cloud's menu portrait in this sequence is different from his usual portrait. This portrait is also used for Cloud in the 1996 Final Fantasy VII demo.