You're searching, aren't you, Cloud? Searching...... for yourself...... I can help too. We'll work together to try and get the real you back!

Cloud's Subconscious is a surreal location inside the mind of Cloud Strife in Final Fantasy VII. It is visited once by Tifa Lockhart following Cloud and her falling into the Lifestream after Ultimate Weapon's attack on Mideel. Cloud was mentally unstable following the experiments of the Jenova Project, and so has to descend into his own mind to find himself. Tifa manages to enter his mind thanks to the Lifestream's effects. Since it is Cloud's inner world, various versions of himself exist as memories from the past.

Masato Katou, an event planner for Final Fantasy VII, made the events for Cloud's subconsciousness. The movies were made by Kazuyuki Ikumori, a Final Fantasy VII movie designer who was originally a graphic designer for the maps. This was the first time he'd tried his hand at movies.[1]

In the menu in the Japanese version this area is called "マインドフィールド" although it is not possible to access the menu in this area. This name is also used in the Final Fantasy VII Kaitai Shinsho The Complete[2]. In the English version the area name is not translated; if one were to access the menu in Cloud's subconscious, it would either display a blank menu screen, or in one place it would display "A promise under a starry sky... But ...was just a memory Tifa imagined?"... or at least the start of it before it gets cut off.

As Tifa helps Cloud to unravel the mysteries inside himself, she visits several versions of Cloud during various stages of his life.

This is Cloud's memory of the Nibelheim Incident, and shows Nibelheim as it was before Sephiroth destroyed it. Cloud begins to play what occurred five years ago, but Tifa tells him he was not one of the two SOLDIERs who came into the town. Instead, it was a black-haired man carrying the Buster Sword.

This is Cloud's memory of his promise to Tifa just before he left Nibelheim to join SOLDIER. Since Cloud does not know if he is the real Cloud, or a Sephiroth Clone created by Professor Hojo as Sephiroth claims, he wonders if this memory is false, just like his memories of the Nibelheim Incident. Tifa claims by viewing this memory the Cloud of Final Fantasy VII must be the real Cloud, as he could not have made up the details so clearly by just listening to Tifa's stories. Cloud himself still has doubts.

Tifa suggests Cloud mention a memory of her she had never talked about. Cloud reveals he wanted to join SOLDIER to make Tifa notice him; they were not nearly as close as Tifa remembers.

This is a memory of Cloud as a young boy looking through Tifa's window before being allowed inside to join the group. The memory is around the time Tifa's mother died and she was so distraught she tried to climb Mt. Nibel to find her, imagining her mother would be on the other side. Tifa's three friends followed, but deserted her. Cloud trailed the group and was the only one present when Tifa injured herself in a fall. The townsfolk blamed Cloud for the accident, and Tifa's father forbade him from approaching Tifa. While in this memory, Cloud breaks into two parts, a normal Cloud, and a black shadow of himself.

Cloud and Tifa were not particularly close as children; she played with three other kids whom Cloud was envious of. He thought they were stupid and immature, though this was a cover for his own loneliness, and admits it was his fault he was not part of the group. When Cloud called Tifa to meet him at the water tower, she was surprised to be called out to a known date spot, apparently unaware of Cloud's crush on her. Cloud was unsure whether she would come, though was glad when she did. Tifa admits after Cloud left town she thought of him and looked for word of his deeds in the newspapers.

Cloud rejoins into a single form and moves back into his memory of Nibelheim. Tifa follows him past the town and into the mako reactor to his memories of confronting Sephiroth. Tifa is injured and the black-haired SOLDIER runs up to fight Sephiroth. Cloud remembers the SOLDIER's name is Zack. Sephiroth easily defeats Zack, but a character wearing the standard blue Shinra guard uniform appears, runs up and stabs Sephiroth from behind with the Buster Sword. When the person removes his mask, it is revealed to be Cloud. He had been concealing his identity under his helmet because he did not wish to reveal he had failed to become a SOLDIER as he had promised Tifa he would.

After wounding Sephiroth, Cloud moved Tifa to a safer place. Sephiroth staggered by and Cloud fought him, only to be impaled by Sephiroth's Masamune. Grabbing the sword, Cloud threw Sephiroth into the Lifestream and defeated him.

After Cloud remembers who he is and what really happened in Nibelheim, his mind is cured. All the versions of himself come together and Cloud is again a whole person. Cloud and Tifa leave the Lifestream and Cloud returns to leading AVALANCHE.

The music that plays in most scenes in Cloud's Subconscious is "Who Am I?". After Cloud has discovered his true persona the music changes to the "Main Theme of Final Fantasy VII". In the scene when Tifa's mother died the theme "On the Other Side of the Mountain" is played.

According to Final Fantasy VII Ultimania Omega[3], Cloud's rescue scene was originally planned to be even longer; after washing up on the shore of Mideel with Tifa, Cloud would have been unconscious and Tifa would have had to revive him with CPR. During this stage Cloud would have a vision of being experimented on by Professor Hojo in Nibelheim, and of his escape with Zack. The scene was moved to be viewed in the Shinra Manor basement in the game's final version. 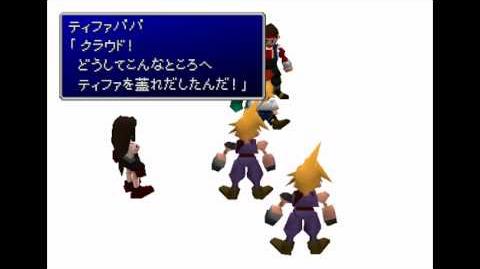 One of the story scenes in Cloud's Subconscious happens on a white background. It retells the events where young Cloud and Tifa have fallen off a bridge and the adult Tifa, Cloud and a black shadow watch the events unfold when the villagers, including Tifa's father, find the two kids. An earlier build of this scene exists in the first Japanese release of the game. If this earlier version is unearthed from the game data, the scene plays out and it appears Tifa has fallen atop of Cloud, so he may have cushioned her fall. There are two Clouds on the scene like in the final version, but they are both the normal fully colored model, rather than one of them being a black silhouette. The player's mobility is not disabled, and the player can move Tifa around. The text reads as gibberish. The text boxes are not transparent like in the final version, and the scene doesn't fade to black when Cloud begins reminiscing about the first time he heard of Sephiroth. As there exists no jump to the Cloud's Subconscious field, the player is stuck in the white field if they manage to trigger this scene.

Both director Yoshinori Kitase and character and monster designer Tetsuya Nomura consider the scenes within Cloud's subconsciousness to be the most striking in the game.[4]

This location and the events within were given an indirect reference in Dissidia 012 Final Fantasy, where Tifa Lockhart when battling Terra Branford of Final Fantasy VI tells her "Don't rush to find answers, okay?" Coincidentally, both Terra and Cloud were rendered amnesiac during key points of their respective games from similar circumstances. Final Fantasy XV: Episode Prompto seems to also take some inspiration from Cloud's identity crisis, where Prompto Argentum faces a similar event and also interacts with a young "ghost" of himself to come to terms with it.