Clothes (ふく, Fuku?, lit. Cloth), also known as Vest, Cloth, Travel Clothes and Clothing, is a recurring armor in the series. It is usually the weakest armor in the game, and is usually the starting equipment of several characters near the beginning of the games that it appears in. There are several variety of clothes as well, such as the Prisoner's Wear, Leather Clothing, and Silk Shirt.

Clothes is the weakest armor and can be equipped by everyone. It is bought in Cornelia, and provides +1 Defense and +2 Weight. Everybody, regardless of job, starts with it.

Clothes is the weakest armor and can be bought for 20 gil in Altair. It provides +1 Defense and -5% Evade.

Vest is the weakest armor, providing 1 Defense and Magic Defense. It can be equipped by all jobs, and can be bought for 50 gil at Ur. It is initially equipped on Luneth.

Clothes is the weakest armor, bought in Kaipo and Troia for 50 gil, and found in Mist. Prisoner's Wear is the second weakest armor in the game, only obtained when Cid joins the party and after rescuing Rosa from the Tower of Zot. It provides +1 Defense, Magic Defense, and Magic Evasion and resistance to Sleep.

The clothes variants include Aloha T-Shirt, which provides no bonuses at all, and Silk Shirt, which can be used by the mages as well as Zidane, teaches Cure and Thunder, grants +7 Defense, and halves damage from Thunder-elemental attacks while making the wearer weak to Fire-elemental attacks.

Leather Clothing is the weakest light armor, granting a mere +10 HP and +4 Defense. It requires the Light Armor 1 license and is the initial equipment of Vaan and Penelo.

The Cotton Shirt is the weakest mystic armor, providing +4 Defense and +1 Magick Power, and requires the Mystic Armor 1 license to be equipped.

The Silken Shirt is a low-level piece of mystic armor that provides +6 Defense and +2 Magick Power. It requires the Mystic Armor 2 license to be equipped.

Clothing is the weakest clothes, providing a mere +5 HP. It is bought in Chapter 1 for 150 gil.

Templar Cloth is the strongest light armor and provides +46 Defense and +20 Resistance.

Travel Clothes is the weakest armor providing a mere +10 Defense. 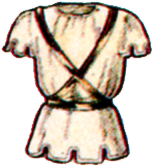