A mining town where mechanical weapons are crafted using techniques passed down from antiquity.

They say the ruins of a lost civilization lie buried beneath the streets of Goug, the Clockwork City. Relics from the age of Saint Ajora, when airships numerous beyond counting filled the skies, and men of iron walked city streets. But the art of crafting such things was lost—if it ever truly existed at all.

The Clockwork City of Goug (機工都市ゴーグ, Kikou-toshi Gōgu?), also known as Goug Machine City, is a location in Final Fantasy Tactics. This mining city produces mechanical weapons with generation-old technology and is the hometown of Mustadio Bunansa and his father Besrudio.

Ramza Beoulve accompanies Mustadio to Goug to locate his father who is in trouble with the Baert Trading Company over the Taurus Zodiac Stone. Mustadio is captured and Ludovich Baert demands the stone. Mustadio tells Baert the stone is in a nearby chimney and Ramza is forced to fetch it for him. After Baert leaves, a battle ensues where Ramza and Mustadio are victorious. The stone Baert now possesses is revealed to, in fact, be a fake.

Goug's outfitter only contains guns, pistols and bows and crossbows and primary accessories.

In Chapter 4, Besrudio discovers two gadgets and Ramza can help retrieve the auracites needed to activate them. The first is Construct 8, and the second a dimensional portal which brings Cloud Strife to Ivalice.

Goug was built on an island in the ancient kingdom of Ivalice and thought to be merely a myth. The truth was that it was abandoned by its people after a massive cataract opened in the ocean, and the structure left behind was repurposed into the Ridorana Lighthouse by the kingdom of Dalmasca that eventually came to inhabit Ivalice's former territory. The Garlean Empire was founded by descendants of the Goug people who migrated north to the continent Ilsabard. 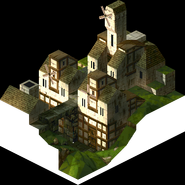 The street in Goug where Mustadio leaves the party temporarily. 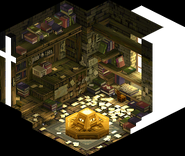 Besrudio's house, shown in a number of sidequest cutscenes. 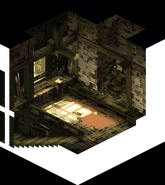 The shed where Besrudio is held. 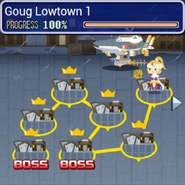 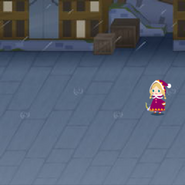