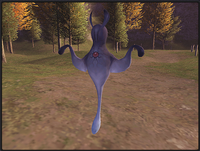 Being a mollusk of mischievous bearing and ghostly aspect, much given to rollicking in a dance at once graceful and deadly. Alongside the Limule, they have grown to prominence in the wake of the great cataclysm, spreading as a plague across Abyssea. Of the little that is known about these invertebrates, their proclivity for aggression towards mankind is well-documented.

Clionids tend to be very aggressive toward the Enlightened Races; however, they only initiate attacks at night, and prey especially upon weakened adventurers, seeking to destroy them quickly through devastating magic spells.