Climhazzard is performed by Cloud holding his sword up in the air horizontally, lunging forward to an enemy, thrusting it into them, and then jumping upwards running the sword along them.

Climhazzard is obtained by using Blade Beam seven times. This can be sped up by equipping Cloud with the Cover Materia, allowing him to sustain more damage and thus use the ability more often. Inflicting Cloud with Hyper also doubles the rate his Limit gauge fills. The forest in the Nibel Area past Mt. Nibel is also a great opportunity for Limit grinding; the Battery Cap enemies are fought in large waves, and their laser attack can increase Cloud's Limit gauge quickly, while the Valron fought there has Gravity-based attacks that can increase Cloud's Limit quickly without killing him. 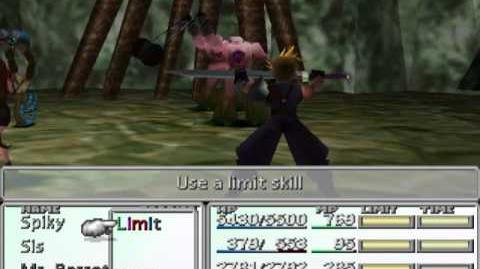 Climhazzard hits a single target at 4.375 times Cloud's normal physical damage. It is, therefore, best used against larger single targets and bosses. However, against waves of enemies, it is less useful than Blade Beam which will deal splash damage to smaller targets.

Climhazzard is outclassed by Meteorain, Cloud's first level 3 Limit Break, however, it takes a staggering number of kills to unlock. Meteorain will attack six times at 1.625 times Cloud's physical damage each hit; against a single target, these hits will all hit the same target, dealing over double the damage of Climhazzard. Though Climhazzard takes less to charge than Meteorain, the greater damage of Meteorain is worth it overall.