Freya: The tempest subsides... By the gods!
Zidane: C'mon, let's go while we can!
Freya: Indeed. Let us press on.
Quina: Must hurry. Must find yummy-yummies!
Freya, Zidane, and Quina speak upon reaching the trunk.

Cleyra's Trunk is an enormous tree that houses the settlement of Cleyra. It is protected from outsiders by a magical sandstorm. Its paths are a winding, sandy maze that require various switches and obstacles to overcome to reach the top.

After the Ritual Dance is performed and the strings of the harp shatter, the storm protecting Cleyra dissipates, and the party descends the tree trunk, finding only a couple of soldiers. They stop at the bridge, where Freya realizes such a small legion could not constitute a proper attack. Puck arrives to confirm what they were starting to suspect: the soldiers at the trunk were just a decoy.

The trunk is subsequently destroyed when Brahne summons Odin.

Cleyra's Trunk and in turn, Cleyra, lies east of Burmecia. Before the events at Burmecia the trunk is inaccessible as the sandstorm is too powerful, but after the initial battle with Beatrix the player is free to enter.

Marked by what appears to be the top of a monster's skull as a makeshift bridge of sorts, it is here the party enter, struggling against the sandstorm, which Freya notes is beginning to subside.

A simple path marks this area. Surrounding the path are numerous twisting roots, and the trunk can clearly be seen ahead.

In order to progress into the trunk of the tree itself, a lever has to be pulled. This is located at the top right and up the steps. Once pulled the door will open into the trunk.

Inside the tree, the paths become sandy, and falling sand often serves to block the party's progress, the flow of which sometimes needs to be stopped in order to proceed or obtain treasure. The trunk areas provides the first opportunity for the player to learn the valuable Blue Magic spell Auto-Life by having Quina eat a Carrion Worm.

Treasure: Magician Shoes, Ice Staff (only obtainable before the sand flow is altered in the Sand Switch Area)

Here the player must climb two sets of tree roots. Once the sand flow has been altered in the Sand Switch Area, trying to cross the falling sand to the bottom will cause Zidane to stumble.

In the lower right hand corner is a hole which must be interacted with. Zidane sticking his hand into it prompts a change in the sand flow outside.

Sand Base (filled with sand)

The Ice Staff will no longer be accessible here if the player did not pick it up before the sand flow was altered. A high ledge with a Silk Robe and second pair of Magician Shoes is visible, but not accessible until the player reaches the settlement. Even then, it is only accessible if the player has recruited Quina to the party by this time.

After reaching the settlement and watching the ATEs "No Yummy-Yummies!" and "There A Mushroom!", the player needs to head to the pit right of the town entrance, and Zidane will jump in after Quina, landing by the two chests further down the trunk (Silk Robe, and Magician Shoes). The two must then climb the normal route back to the town.

A moogle by the name of Monev resides in a hollow within the internal roots. If the player received a Mognet letter from Atla in Burmecia, they can deliver it to Monev.

Zidane and Quina can been seen falling past this bridge after being pulled into the Antlion's sand pit.

In order to stop the sand flow on the upper path, the lever must be pulled on the lower Sand Lever path.

The lever on the lower path must be pulled in order to stop the sand flow on the upper sand path and so be able to access the upper area.

Nearing the top of the trunk are three quicksand pits. The player must carefully work their way around them, or if they fall into one, repeatedly press

to escape. Should they fail to do this a fixed battle against a Sand Scorpion will occur.

The path leading to the ladder that will take the player to Cleyra settlement.

The settlement of Cleyra is just up the stairs.

The moogle Monev can be found in the Sandfall area. If the party received the letter from Atla in Burmecia, they can deliver it to Monev. He does not have a letter to give to the party.

The Sand Scorpion appears as a fixed encounter whenever Zidane fails to escape the sand pits in time.

The theme of the trunk is called "Cleyra's Trunk". 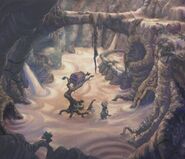 Artwork of the treasure room.

Tree Trunk without the sandstorm.