I've always wondered why people call it the 'City of Illusion.'

Cleyra is a settlement on the Mist Continent in Final Fantasy IX situated on a gigantic tree. The path through the tree is known as Cleyra's Trunk.

The town of Cleyra is surrounded by a sandstorm, protecting it from harm. The sandstorm is powered by one of the four fragments of a summoning jewel. The Cleyran people were originally Burmecians, but, following a disagreement over the Burmecians' taste for war, the Cleyrans distanced themselves from Burmecia.

Following a disastrous summoning attempt in Alexandria, the eidolon Alexander was extracted from its summoner and its gemstone split into four crystals. One of these pieces was given to Burmecia, sparking a civil war over its ownership. A group of fundamentalists eventually took the crystal and founded Cleyra in the Vube Desert. Around a 100 years ago, following another civil war in Burmecia, Cleyra severed its ties to the outside world and remained isolated behind its sandstorm.

Soon after their arrival the usually docile Antlion attacks Puck. The party saves the young prince, but he runs away, stating he does not wish to see his father. Freya reports back to the King of Burmecia in the cathedral and is asked to participate in the Ritual Dance.

The Ritual Dance is performed to pray for the strengthening of the sandstorm that surrounds Cleyra and grant it protection against outside intrusion. Four female Cleyrans and Freya perform it, while a fifth plays the harp that contains a sacred jewel. Unbeknownst to the Cleyrans, this is a summoning jewel. At the end of the dance the harp strings shatter, dissolving the sandstorm, revealing Cleyra, and allowing the Alexandrian forces to besiege the great tree.

The party descends the tree trunk, finding only a couple of soldiers along the way. They stop at the bridge where Freya realizes such a small force could not constitute a proper attack. Puck arrives to confirm that the soldiers at the trunk were just a decoy. The party hurries back to Cleyra but, with the protection of the sandstorm gone, General Beatrix attacks the town with her soldiers and black mages warp in from the Red Rose directly into the settlement.

The party attempts to defend the citizens by directing them to safety, and after guiding the surviving Cleyrans to the cathedral, the party is ambushed by a horde of black mages. They are saved by the timely arrival of Sir Fratley, and the party escapes into the cathedral. Beatrix infiltrates the building and takes the jewel atop the sacred harp, stating that they "fail to grasp the true power of the jewel".

She flees and is pursued by Zidane and company, who engage her in battle to reclaim the gem but fall to the Alexandrian general. Beatrix teleports out with the black mages. Zidane, Vivi, and Freya follow and end up on the Red Rose as Queen Brahne summons Odin. The sky turns black as the eidolon parts the clouds, and with a single spear obliterates Cleyra, leaving behind a colossal mushroom cloud.

If they was recruited, Quina leaves the party for the time being, citing their fear of heights for their departure. Zidane, Vivi, and Freya are left thinking Quina perished in Cleyra's destruction until their reunion with Zidane and Vivi in Qu's Marsh later. Sir Fratley similarly goes missing and the surviving Burmecians and Cleyrans are scattered across Gaia.

The road to Cleyra is a long maze within the giant tree filled with sand pits and monsters. Whether it was fashioned this way naturally or caused by the Cleyrans is unclear. The journey up the trunk contains several switches that alter the flow of sand within the tree, and thus may open up new passages and treasures. After a certain point up the trunk, the player is unable to leave until the story permits so. This is the earliest time Quina can learn Auto-Life, by eating a Carrion Worm.

Cleyra itself is a small settlement atop the tree. It is divided into several smaller zones.

Cleyra's entrance. When the party finally arrives after the long climb up the tree trunk, Forest Oracle Kildea will offer to give Zidane and Vivi a tour of Cleyra.

The Sandpit is located beside the entrance. It is the home of a tame Antlion. It also directly connects with the passages that lead up to the settlement.

After the Active Time Events with Quina, they can be found here still looking to eat. In a daze they will think the swirling sand of the pit is ice cream and jumps in, getting sucked down. Zidane will chase after and both will fall past the bridge the passed on the way up and end up landing on the inaccessible ledge in the sand base, now being able to reach the two chests with the Silk Robe and second pair of Magician Shoes.

The Town is the liveliest part of Cleyra. A market (which is closed during the events of the game) and the town's Inn are located here. This is also where the player can find Soldier Dan who sells weapons and armor.

The Observatory is a small platform built over a protruding branch of the giant tree. It is where Cleyra's citizens pray and relax.

The Water Mill is Cleyra's source of water, pumping water from the ground. In the middle of this area, next to the sign hanging form the tree, the player can find Thunder Gloves.

The Windmill uses the sandstorm's power to draw water all the way up to the treetop. Star Maiden Nina's shop is located here.

The Cathedral is the place of worship where the Cleyrans pray to the sandstorm and perform their ritual dances of strengthening. The Cathedral is also home to the High Priest who rules over Cleyra. The Desert Star, the heirloom crystal piece, is held atop the harp that is played for the ceremony to strengthen the sandstorm.

Ether, Hi-Potion and Phoenix Pinion are purchased from Stiltzkin for 444 gil (who can be found inside the Inn after the sandstorm disappears).

Stiltzkin is a traveling moogle who offers a one-time deal on an item package. If the player buys his items in every location where he can be met, they earn a Ribbon near the end of the game.

When Stiltzkin comes to Cleyra, he is found at the inn after the sandstorm disappears. He an sells a pack containing a Hi-Potion, an Ether and a Phoenix Pinion for 444 gil. The player's inventory cannot be full on any of these items.

When the party first meets Mopli in the Cleyra Inn, she has a letter for Zidane:

After Freya joins the party in Cleyra, Mopli will receive a letter:

The letter the party delivers from Mopli to Serino on the Red Rose:

The player must direct Cleyrans to safety, which will yield various rewards depending on which villagers were saved. At the water mill, the player should advise the oracles to go right. At the inn, the player should tell Dan's family to go left, and then, by the bridges, tell them to go either left or right, but not up the stairs. At the observatory, the player may tell the villagers either that they are out of danger or that they are not safe yet: both choices lead to the same outcome. At the cathedral, Fratley appears to eliminate the enemies. After Beatrix takes the jewel from the harp and leaves, the player can speak to the survivors, who will gift the following items:

Saving everyone earns the Out of Harm's Way achievement/trophy in the latest versions of Final Fantasy IX.

The world map around Cleyra, consisting of the areas Vube Desert and Eesistern Coast, has the following random encounters.

Concept artwork of the Cleyra citizens. 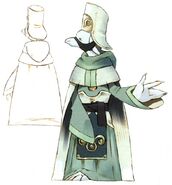 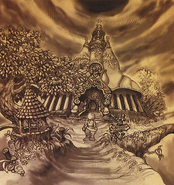 Battle background in Cleyra when fighting the Antlion. 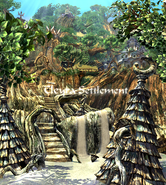 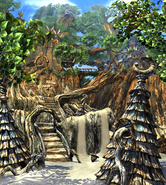 Cleyra Settlement entrance without the sandstorm.

Water mill without the sandstorm.

Windmill without the sandstorm. 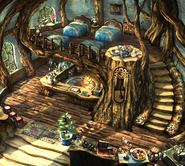 Observation Point without the sandstorm. 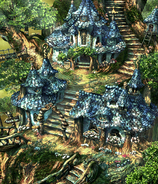 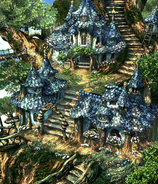 Town area without the sandstorm. 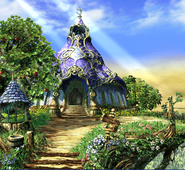 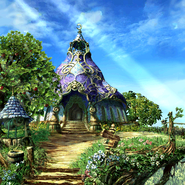 Outside the Cathedral without the sandstorm.

Cathedral without the sandstorm.