The Cleric (クレリック, Kurerikku?) is a recurring job in the series, often appearing in the tactical role-playing titles. It is a support job similar to the White Mage, having access to a variety of support and attack spells. Like most mage jobs, Clerics use staves as weapons and can only equip light armor.

The Cleric is the unique job of Alma Beoulve when she joins the party as a guest. The job has access to the Holy Magicks command, allowing her to naturally use the abilities Aegis, Dispelna, and Chant. The Cleric can only equip staves, hats, clothes, and robes.

The Cleric is the job of Alma. It is a healing magic job that can utilize all forms of White Magic abilities, allowing Alma to support the party by managing buffs and debuffs. Alma can only equip rods and staves as her main weapons.

The Cleric is Alma's listed job, with her role specializing in magic damage and healing. As a Cleric, Alma has access to a large pool of healing and support spells. 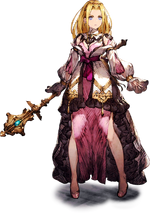 The Cleric appears as the unique job of Machérie Hourne and Cadia. The job gives the character access to the Cleric command abilities, having access to spells that mitigate light and dark damage to the party, while having status removal spells like Erase and Esunaga.

Characters with access to Cleric as a secondary job include; Agrias, Etre, Fina, Livialle, Mia, Minwu, Moore, Naiah, and Serjes.

[view · edit · purge]A cleric is a clergyman or other person in religious orders. It is also a character class in fantasy role-playing games.