Nao Toyama (CG Limit Burst cinematics)
Cleome is one of Fina's companions in Season Three and a student of the Symphonia's Music Academy in Final Fantasy Brave Exvius. She joins Fina and her friends to for her friend Conche and joins the Hollow Breakers.

Cleome is a young girl with long black hair and eyes. She wears a black headband, a sleeveless black, red, and white outfit with detached sleeves, white gloves, black stockings, and white shoes.

Cleome is voiced by Nao Toyama in her CG Limit Burst. 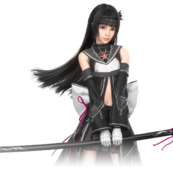 Like the rest of Fina's female companions, Cleome is named after flowers.