It generally appears as an attack associated with the Crusader and Typhon summons, dealing massive damage to all enemies. Since its appearance as an Oracle ability in Final Fantasy V, the attack has often become associated with Krile Mayer Baldesion in later spin-off appearances.

Cleansing is a First Rank ability from the Predict skillset, costing 1 MP to use. It deals moderate to major non-elemental damage to all enemies.

Cleansing (Purifier in the SNES translation) is Crusader's summon ability that deals non-elemental magic damage to both the enemy party and the ally party. Its spell power is 190 (the highest out of any spell or ability in the game, save for Kefka's Forsaken and Gilgamesh's Enkidu in the Game Boy Advance version). It is unblockable and ignores Split Damage. It costs 96 MP use.

Disintegration is the ability of Typhon when summoned, costing 160 MP to use. It deals major Fire-elemental, Ice-elemental, Lightning-elemental, and Earth-elemental damage to all enemies with a power of 110 while ignoring Magic Defense.

This section about an ability in Before Crisis -Final Fantasy VII- is empty or needs to be expanded. You can help the Final Fantasy Wiki by expanding it.

Four different versions of the Cleansing ability appeared in the original free-to-play versions of the game. The abilities were all summon abilities used by the Warring Triad-type summons and all dealt damage to friend and foe alike, serving as a reference to the Crusader summon from Final Fantasy VI.

The default Cleansing ability was used by the Warring Triad OR non-elemental summon. The ability dealt non-elemental damage to all enemies and allies. The summon ability required three bars from the summon gauge to use.

The abilities were removed from the premium versions of the game.

Cleansing is an Ultra Soul Break, available to Krile. It deals 10 Fire and Non-Elemental damage to a single target, infuses Krile with the Fire element, raises her Magic (by a moderate amount) and Resistance (by a small amount), and temporarily causes her Fire-element abilities to trigger the follow-up attack Dance of the Flame. Dance of the Flame deals between 2 and 6 hits of Fire damage to a target, depending on how many times the triggering ability has been honed. The name is based on the ability used by the Oracle job in Final Fantasy V, though the animation more closely resembles the Eruption ability.

Savage Heavensfall is an ability used by Typhon, as the Rank 5 Wind Magicite boss for magic teams. The attack is based on his summon attack from Final Fantasy VII, though with a different translation of the name. The attack deals a high amount of Wind and Earth-element damage to all party members, ignoring the Resistance stat.

Heavensfall is an attack available to each member of The Warring Triad, in the Transcendent fight "The Triad Descends". Each member of the Triad can use the skill in the second phase of the fight. The attack deals damage based on the targets' maximum HP, ignoring Resistance, Mirror Image, and Magic Barrier. It also increases the targets' Pain level by 1, increasing damage taken. This use of the ability by the Triad may reference the Crusader Esper, who has been described in the Final Fantasy VI Ultimania guide as reproducing the Warring Triad's power. 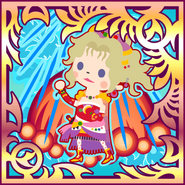 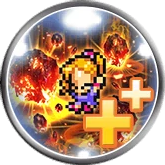