Wielding a sword such as this is not a warrior's right. It is his privilege.

Claymore (クレイモア, Kureimoa?), also known as Great Sword and Giant, is a recurring weapon in the Final Fantasy series. It is often a mid to high-ranked greatsword with high Attack power.

The Great Sword (Claymore in the Origins version and originally known as Giant) is a mid-ranked sword for Warrior, Knight, Ninja, Red Mage, and Red Wizard. It provides 19 Attack, 15 Accuracy, and deals critical damage when used against Giants and can be found on Mount Gulg.

Claymore is the weakest greatsword (besides the Treaty-Blade and Sword of Kings) and requires 50 LP and Greatswords 1 license to use. It costs 10,500 gil to buy at Archades and provides 82 Attack and 10 Evade. All greatswords have 2.47s charge, and 1.2s action time, making them average what it comes to attacking speed.

In the Zodiac versions, it now provides 83 Attack, 20 Evade, 35 CT, 8% combo rate, and requires the Greatswords 1 license for 50 LP. It can be found as a treasure in Draklor Laboratory (67th Floor - Room 6711 West) and Cerobi Steppe (South Liavell Hills, Feddik River), or poached from Spee (5%). It can be equipped by the White Mage, Red Battlemage, and Knight.

Claymore is a high-ranked broadsword that provides 49 Attack and 5 Defense, and teaches Monkey Grip to Warriors. It is a random reward for completing a mission.

Claymore is a high-ranked broadsword that provides 45 Attack, 5 Defense, and 2 Evasion. It teaches Rend Weapon to Defenders for 350 AP and Whirlwind to Raptors for 300 AP. It can be bought for 3,800 gil in the shop after creating it in the Bazaar after using a Tarknov Crystal, Adamantite, and Tanned Tyrant Hide.

Claymore is a mid-ranked great sword that provides 2 Risk, 22 Strength, 4 Range, and -4 Agility.

Great sword made for heavy knights. Really too heavy to be used much.

The Claymore also appears as one of Vaan's weapons and Bravery attack Greatsword when in normal form.

The Claymore is one of Garland's alternate weapons, based on the weapon design from his character model in Dissidia 012 Final Fantasy. This weapon was obtainable as an exclusive pre-order bonus when the game was purchased through GameStop. Like all other characters' weapons, equipping it offers no advantages or disadvantages.

Swinging around this huge sword is a very effective means of anger management.

Claymore grants +1 to Attack. It can be equipped by Knight, Mystic Knight, Cecil, Bartz, Cloud, Squall, Seifer, Steiner, and Vaan.

The Claymore is a 2-handed sword within the Forsaken Dungeon. It provides 30 Weapon Atk, 10 Durability, -2 Speed, -1 Consumption Rate, and -10 EXP Gain Rate.

Claymore is a spear that can be equipped by Santiago.

In Bravely Second: End Layer, Claymore is a greatsword that provides 46 P.ATK, 85 Aim, and deals 50% more damage to dragonkind. It can be bought in Grandship for 13000 pg, or stolen from Kaiser Oblivion (ch 5). 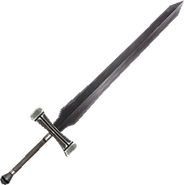 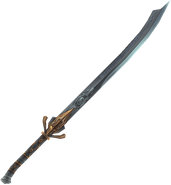 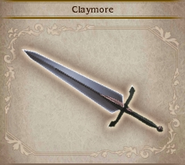 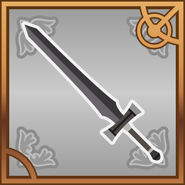 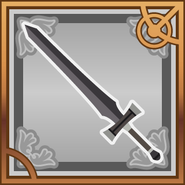 This gallery is incomplete and requires Vagrant Story added. You can help the Final Fantasy Wiki by uploading images.

[view · edit · purge]The claymore was a type of large, two-handed blade. It was used by Scottish troops circa 1500 - 1700 CE. The word comes from the Gaelic claidheamh mor meaning "very big sword", although the name was probably not used contemporaneously with the actual weapon.