A class change, also known as a job change, is an event and ability in the Final Fantasy series where characters change their job as given under the job system. This is often signified by a change of outfit, a change of abilities, and a change of job title. In some games without the ability to change jobs freely, a class change is a plot element to signify a character's growth.

Bahamut grants the party a class change when they bring him a Rat's Tail from the Citadel of Trials as proof of their strength. The change is permanent and grants the party new skills, including increased equipment usage and higher stats, and some other differences.

The playable characters can switch jobs outside of battle, though there are limitations. In the original NES version, switching jobs requires an amount of Capacity Points, varying based on job level and job type. In the 3D versions, characters go through a Job Adjustment Phase where their stats are lowered by 1/8 for a number of battles after changing jobs. These costs for changing jobs are based on the difference between the user's prior job and the new job; switching from a physical job to a magical job or vice versa has a greater cost than switching between similar jobs.

Cecil class changes from a Dark Knight to a Paladin on Mt. Ordeals, cleansing his spirit of the dark power to gain the holy power needed to fight Golbez. Cecil loses the Darkness ability, but gains the abilities Cover and White Magic. He is also able to use more equipment than before, but can no longer use his Dark Knight equipment, and has higher stat growth.

Four characters class change, but in three such cases it is merely a change of job title with no new abilities or change of appearance. However, the story events include events beforehand that grant the characters new skills.

After completing his trial of knighthood, Ceodore class changes from Prince to Red Wings, and in the battle with Sand Worm to complete his trial unlocks his hidden potential to learn the Awaken ability.

Ursula class changes from Princess to Monk when she protects her bodyguard Monks from an Adamantoise, proving her kind heart to Yang and convincing him to train her as a Monk. In the fight with the Adamantoise, Ursula learns the Tenketsu ability.

Leonora class changes from an Epopt Trainee to a full Epopt when she climbs the Tower of Trials, Palom teaching her Black Magic along the way.

At the end of Kain's tale, Kain defeats his dark side and is transformed into a Holy Dragoon in recognition of his strength. As a Holy Dragoon, Kain has higher stat growth, a larger equipment pool, and can cast White Magic.

Characters can change between jobs in the menu whenever the player wishes.

Changing dresspheres occurs both in and out of battle, and when performed in battle is called a Spherechange. Spherechanging allows the player to shift to any other dressphere equipped on that character's Garment Grid, possibly activating stat boosts, positive status effects or other abilities in the process.

Players can change jobs any time they wish by entering the player's Mog House or local Rent-a-Room. Jobs track levels independently each time the player changes, so level progress is not lost.

Lightning can change between any of up to three schemata in battle instantly. Each schemata's abilities and equipment are chosen by the player. Each schemata has its own ATB meter for the usage of abilities, with varying ATB speeds and maximum ATB values.

Disciplines are decided by the

Tool equipped in the main hand, so characters can change discipline by simply changing their equipment. Class changing can be done anywhere, except in instanced duties, or during combat.

Patch 1.21 introduced jobs as more advanced disciplines for the disciples of war and magic. Jobs originally were originally intended to be more specialized and focused versions of their base class at the cost of versatility, but this has since been changed such that the base classes lost any versatility they may have held over jobs, making jobs outright replacements. Jobs require a soul crystal equipped in addition to the base weapon. New jobs introduced since Heavensward have not had base classes, and their soul crystals are equipped by default.

Job growth and changing jobs is dependent on the player's job level. Beginning as a Squire or Chemist, as the player gains levels in their jobs, new jobs become available based on prerequisite levels in other jobs. A Squire can become a Knight or an Archer, which then further diversify into the Monk and Thief. Some jobs require the player to have a level of skill in multiple other jobs before it is unlocked. The player can switch between the jobs their characters have unlocked freely.

Class changing is more linear, and dependent on a character's race. Job progression is tracked by the characters mastering abilities tied to their job's equipment, and once they master enough abilities they can class change to a higher level job. Which job varies depending on race—humans change from Thieves to Ninjas, but Moogle Thieves class change to either Gadgeteers or Jugglers. Mastery of skills from several jobs is sometimes needed to unlock an advanced job, and the player can change between unlocked jobs as they wish.

Changing classes is dependent on a character's race. Job progression is tracked by the characters mastering abilities tied to their job's equipment, and after mastering enough abilities they can class change to a higher level job. Mastery of skills from several jobs is sometimes needed to unlock an advanced job, and the player can change between unlocked jobs as they wish.

Monsters can change into other monsters depending on what meat they eat. This transformation can be good or bad depending on what monster they change into. The meat of Boss monsters is often very powerful and will increase the monster's level. As they progress through the game, the player will notice that there are different categories of monsters. At different points in the game, like when they eat a Boss's meat, they may jump to a higher level or category of monsters. These changes often go across the entire spectrum of monsters. Occasionally it is possible to decrease a monster level, especially early on in the game. However, near the end of the game it is nearly impossible to decrease the monster's level.

Transformation is only available to the party's Monsters. Monsters change their forms by eating the meat of other monsters. Depending on the type, this can turn them into a weaker or stronger monster. Whether or not they become stronger depends on the meat they eat. They need to eat the meat of a strong monster in order to become stronger. They should not miss the meat of boss monsters if they drop. They may become weaker, however, by eating the meat of a weak monster. Once the monster has become strong, they should not eat the monster's meat unless the player is truly sure that it's the meat from a very strong monster.

Characters can shift acquired jobs at will.

Characters can change between jobs in the menu.

The player can change between jobs as they like.

Warrior of Light performs a class change as his EX Mode, transforming into a Knight as in Final Fantasy. He gains the abilities Protect, increasing his Defense, Mirror Attack, reflecting low-priority attacks while he is attacking, and Light's Blessing, which summons swords of light when he attacks to do further damage. Garland also performs a class change, gaining the ability Indomitable Resolve, which prevents him from being staggered when attacked while he is attacking, with the exception of some HP attacks.

Onion Knight performs a Job Change in his EX Mode, into a Ninja and Sage. As a Ninja he Dual Wields, dealing twice as many hits with his physical attacks, and Sage's Wisdom as a Sage, doing more damage with his magic attacks and firing more spells when he attacks. After the initial job change when entering EX Mode, the Onion Knight automatically changes between Ninja and Sage depending on what type of attack he uses.

Cecil automatically shifts between his Dark Knight and Paladin classes when using certain attacks. His EX Mode ability, Job Augment, allows him to change classes at will by pressing

Kain's EX Mode is Holy Strength, a reference to his class change to a Holy Dragoon in The After Years. Kain gains the special attack Lancet, which damages the opponent's HP and heals Kain for the same amount of damage.

Class Change is the Warrior of Light's exclusive Level 40 ability. It activates in BMS after chaining 70 notes, and subsequently reduces all damage taken by 50%.

Class Change is an exclusive reactive ability that costs 18 CP to equip. It is activated just once in Battle Music Sequences (BMS) when the player makes a chain of 70 hits. It decreases damage taken by the party until the stage ends (extra strength). It is learned by Warrior of Light (level 40).

The Warrior of Light has Class Change as his default Soul Break. For the cost of one Soul Break charge, Class Change raises the user's Attack, Defense, Magic, and Resistance by 30% for 25 seconds. 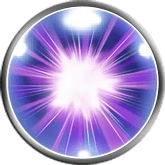 Players can change jobs as they wish.