Head of Crownsguard
Ruling council member
Shield of the King

Sworn shield and childhood friend to King Regis, Clarus is valued as much for his voice as he is his mettle. His son, Gladio, travels alongside the king's in FINAL FANTASY XV.

Clarus is Gladiolus and Iris Amicitia's father, King Regis's childhood friend and his Sworn Shield, and a member of Lucis's ruling council. He leads the Crownsguard, a group of soldiers usually tasked with protection of the Crown City and the Citadel, and thus, the royal family. He also led the Royal Guard before its restructuring into the Kingsglaive.[1] He accompanied Regis on a trip similar to the one their children would end up taking thirty years later.

Clarus is only mentioned once in Final Fantasy XV: as they approach the Titan, Noctis tells Gladiolus he's grateful for his father after Gladiolus discusses the responsibilities of his family and its role.

Clarus is a middle-aged man with a shaved head and blue eyes. In the past, he had a full head of brown hair and a thicker beard. He wears the black and gold uniform typical of the Lucian ruling council's members. Clarus has the same bird tattoo his son Gladiolus has, although it is never seen in Kingsglaive. The tattoo is for male line of the Amicitia, and is the credential of the King's Shield rather than a family crest, the family members getting their tattoo when they become one of the shield.[2]

The weapon Clarus is most often seen using has the same design as the Broadsword from Final Fantasy XV, with the addition of the small tube used for collecting elemental energy, as found on many Crown City-made weapons, such as the Engine Blade.

Clarus is loyal to his friend and ruler, King Regis. He is willing to endanger his life for the monarch, and fights for the survival of his kingdom. Clarus considers protecting Regis to be his purpose in life as the King's Shield. He bears no grudge for Regis's final choices, instead empathizing with him. Clarus passes on his views of seeing Regis as not only a king but a true friend to his son. Although he admits to feeling guilty over being unable to tell Gladiolus the truth, he is more confident than Regis that their sons will grow to understand their choices.

In M.E. 725, Regis fought alongside Cid Sophiar, Clarus Amicitia, Cor Leonis and Weskham Armaugh on their trip to Accordo. Niflheim breached the three regions of Leide, Duscae, and Cleigne, where they began establishing bases. Lucis challenged the empire but were pushed back in the war that became known as the Great War. Regis, as the Lucian prince, traveled to Accordo with a select few to seek the restoration of an allied force, but was forced to withdraw to the Crown City due to the Lucian army's defeat. The range of the Wall was pulled back to Insomnia's ramparts to maintain the strength to resist the empire's invasion efforts.[3]

When the ruins in Taelpar Crag were discovered, Lucis sent its soldiers to investigate only to be slaughtered by Gilgamesh, the legendary bodyguard of the Founder King from 2,000 years ago. Gilgamesh's mission is to test the might of the Chosen King's Shield, but Clarus never undertook the trial as he didn't deem it worth abandoning King Regis for. Clarus reasoned that the king needs someone by his side at all times, and what is a Shield for with no one left to protect? When Cor wanted to take on Gilgamesh, Clarus tried to reason with him and asked if the former would be willing to risk all he had for nothing in return. Cor disobeyed the advice only to barely return with nothing to show for it, just as Clarus had predicted.

During the disastrous Founding Day festivities in M.E. 734, Clarus commanded various members of the Royal Guard to attack an unidentified individual posing as a Lucian border patrol officer who was responsible for the carnage alongside a giant. When it became apparent that the empire was involved, Clarus attempted to rally the troops to hold off the impending imperial invasion, although Regis insisted he fight on the front lines to defend the kingdom.

When Regis took Noctis to Tenebrae for the latter to recuperate from a daemon attack, Clarus accompanied them.

As depicted in Final Fantasy XV Prologue Parting Ways, Clarus has been so busy with the treaty-signing preparations that he sleeps at the Citadel where his daughter Iris visits him to bring him a change of clothes.

At the Crownsguard's training hall, Clarus tells Gladiolus, his son, about the security measures in place during the signing ceremony of the treaty between Lucis and Niflheim. Marshal Cor Leonis will be on external patrol that day and the Crownsguard will operate as usual. Only the bare minimum will be on duty, as the Citadel will be left to the Kingsglaive. The peace has brought along many changes, including the role of the Crownsguard whose new place will be with the people rather than the king. Clarus doesn't mind as protecting the populace ensures their support for Regis, as House Amicitia has but one duty: to safeguard and support the king. Clarus asks Gladiolus to keep Prince Noctis safe, not just as the heir apparent, but as a comrade and a true friend.

Cor arrives with Prompto Argentum who has arrived for his Crownsguard uniform. Prompto is nervous to be meeting Clarus, and affirms he has completed his self-defense training for the journey. Gladiolus and Prompto leave and the atmosphere becomes solemn. Clarus notes Titus Drautos, the captain of Kingsglaive, hasn't looked well lately. Cor is unhappy the Crownsguard has been excluded from everything related to the signing, and Clarus reminds him that the new orders are for the Crownsguard to protect the people of Lucis, and says Kingsglaive are is the only ones who can fight the empire.

Late at night, Regis and Clarus return from the interminable meeting. Regis is unhappy he can't be honest with those closest to him on the so-called peace treaty. Clarus empathizes, as he similarly couldn't tell Gladiolus. Regis ponders how people will remember his legacy, and apologizes to Clarus his actions will sully the Amicitia family name, as they are in the service of Caelum. Clarus says Regis doesn't need to apologize, as to him Regis is more than a king: a true friend.

Clarus aids King Regis in deciding to accept Niflheim's offer of peace, as proposed by Chancellor Izunia. A few days later, he attends the resulting treaty-signing and informs his ruler the Kingsglaive has freed Princess Lunafreya of Tenebrae from a Niflheim airship. After the empire attacks and reveals its intention to steal Insomnia's Crystal, Clarus teams up with King Regis to fight Imperial General Glauca. He is killed in the ensuing clash.

At some point before his death, Clarus had asked Cor Leonis to guide his son Gladiolus to become his successor as the Shield of the King. As the two spar at the Tempering Grounds, Cor reveals this to Gladiolus and tells him Clarus would have been proud of his son.

Clarus appears as an assist character that Regis can call on. When summoned, Clarus strikes at the enemy closest to Regis with a series of wide radius spinning blows and can attack enemies from all surroundings at close range. When summoned in Armiger, Clarus makes a three-hit series of heavy blows onto a nearby opponent, and sends off with a salute, being the first to strike before Regis.

The likeness of Gil Darnell is used to portray Clarus. Liam Mulvey serves as the character's motion capture artist.

In Piggyback Interactive's Final Fantasy XV Complete Official Guide, Clarus's name is misspelled as Crailas Amicitia. His portrait also doesn't match his actual appearance, but instead is based on an unnamed character often seen alongside King Regis in Final Fantasy Versus XIII and early Final Fantasy XV trailers. Since it was already established that Gladiolus's family had been serving Noctis's for generations, this character could be Clarus's original design.

Clarus is voiced by Banjo Ginga in the Japanese version of Kingsglaive: Final Fantasy XV. He shares this voice actor with Reeve Tuesti from the Compilation of Final Fantasy VII, as well as Fusoya and Kluya from Final Fantasy IV. 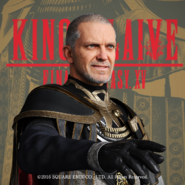