Often magnanimous and occasionally malicious, Celestia serves as the Akatoki Warden, one of the elite members of the kingdom's Five-Star Royal Guard. She hails from an old and distinguished family. Her parents were very strict with her, bringing up their eldest daughter through rigorous education. Celestia rose to the challenge and sailed through with flying colors. Government officials took note of her hard work and selected her for the position of warden. Despite her hardworking nature, though, Celestia will sometimes lose herself in her surroundings, swept up by beautiful scenery or the sound of music. This affable side has won her great popularity among the kingdom's citizens.

Claes Celestia Misca Sancest is a supporting character from Final Fantasy Type-0, who is a playable character in Final Fantasy Awakening. Celestia has a son named Claudio Tonogiri Misca Sancest who serves in the Concordian military. She serves as an ambassador to Queen Andoria and is an elite knight of the Akatoki, who protect the kingdom's peristylium and sovereign. She is pride of her nation.

The wardens of the Five-Star Royal Guard inherit their positions and play a role in all governmental affairs. Of the Five-Star divisions the house of Akatoki under its Warden Celestia handles all military operations in conflicts against the other Crystal-States.

According to the Rubicus, Celestia is 32 years old and 135cm tall. She has gray hair and brown eyes, and wears turquoise lipstick. She wear an elaborate headpiece with two large spirals with "tails" hanging down her back. She wears a floor-length white kimono with turquoise embroidery detail. The white of the kimono fades into blue shades at the hem and at the ends of her sleeves. It is cinched at the waist with an obi. Her l'Cie brand is on her right shoulder.

Celestia speaks an archaic form of English, stressing certain metric and using subordinate clauses and cleft sentences where shorter ones would suffice. She frequently transposes verbs and subjects to give her manner of speech a poetic feel. Celestia analyzes any situation, and takes time to listen what the other party has to say. Her people place great faith in her as the queen's ambassador, and she is the queen's close friend, accompanying her whenever she leaves her castle. Celestia views Clemente Yuzuki Nes Peacemaker as her rival. Celestia dedicates her life to serving her nation and queen.

The novel tells the events of the cycle of Orience prior to the one told in the game. Celestia accompanies Queen Andoria as her bodyguard, but when the queen is meeting with Class Zero she is struck by a sniper. Andoria refuses healing from Deuce, saying that her death is her Focus. Celestia jumps out the window to pursue the Militesi sniper. When the commandant of the Dominion of Rubrum later says Class Zero must take blame for the regicide lest they can prove their innocence, Celestia is called as a witness. She arrives in the dominion capital to affirm that Andoria was killed by a Militesi sniper, and the Rubrumite-Concordian alliance is reinstated, and the war against Milites recommences. During her stay Celestia discusses strategy with the commandant all night, and as she prepares to return to Concordia, converses with Trey and Cinque from Class Zero, surprised but not offended when Cinque refers to her by a casual nickname rather than a formal greeting.

Milites deploys magitek armors outfitted with Ultima Bombs to obliterate Mahamayuri, the capital of Concordia. The dragons whisk Celestia away while Soryu, the Azure Dragon Primus l'Cie, stays behind to defend the capital. Soryu capitulates and Mahamayuri and the Azure Dragon Crystal itself are destroyed, letting loose the monsters and dragons the crown citizens had previously harnessed. Celestia returns to aid the dominion with the war effort against Milites, seeing her only remaining calling in life to be her work as a military officer. During the Battle on the Big Bridge, she helps Cater and Eight get to Ingram territory by offering them a one-way passage on one of her dragons, as the dragons she had personally reared remain loyal to her despite the Azure Dragon Crystal's demise. The Class Second cadets accompanying them give up their lives to summon three Bahamuts, and Celestia and the Bahamuts perish in the attack against Ingram.

Celestia raised her son, Tonogiri, alone. After Milites annihilates the Lorican Alliance with the Ultima Bomb and starts its military campaign against the Dominion of Rubrum, Celestia travels to Akademeia to speak with Chancellor Khalia Chival VI. She runs into Deuce and asks her for directions.

When Andoria invokes the Fabula Pact and calls for a ceasefire, she travels to the Militesi capital with Celestia and Clemente. Andoria is assassinated, and the blame is placed on Class Zero that was stationed at the city waiting for their next mission. An outraged Celestia hunts the cadets down and summons a diepvern to knock out Rem Tokimiya and Machina Kunagiri before focusing it on Ace. Celestia halts her attack when Deuce stops Ace from harming Celestia's dragon. The cadets explain that they have been wrongly accused for the regicide, and Celestia is convinced when the dragons believe them. She aids the class escape Ingram to the Old Lorica Region before departing.

Celestia succeeds Andoria as the Azure Dragon Secundus l'Cie and inherits her Focus.[note 1] After the King of Concordia offers his services to Cid Aulstyne of Milites, the real mastermind who plotted Andoria's assassination, Celestia is sent to lead the Concordians' assault against the Rubrumite military as part of Militesi two-pronged attack. During the battle, informed of Rubrum gaining the advantage, Celestia assumes a draconic form to kill off the Class Zero members assigned to the fight. However, Arecia Al-Rashia intervenes with Bahamut ZERO, driving Celestia back.

The king orders Celestia to unseal the Dracobaltians residing in Naraku, a task she carries out reluctantly. Class Zero kills Tonogiri in the invasion of Mahamayuri. Though devastated, Celestia does not let this deter her from her mission. Rubrum conquers both Concordia and the empire, and Tempus Finis begins. Pandæmonium rises from the sea and the Rursan Reavers it sends out attack Orience. Concordia falls to the Rursus, while Akademeia only barely survives after sustaining massive losses, among them the last Vermilion Bird l'Cie, Zhuyu Voghfau Byot.

Deeming herself the only remaining l'Cie, Celestia goes against the Azure Dragon Crystal's desire and helps Class Zero reach Cid Aulstyne in Pandæmonium as he invokes Finis. Though part of her cannot forgive Class Zero for killing her son, Celestia knows Andoria had seen her own death and followed through with it out of hope. After leaving Class Zero with the parting words that they should not fear death and follow their own path, she assumes her Shinryu Celestia form to fly ahead of them to avenge Andoria. The Rubicus states that she turns into a wyvern Cie'th for opposing her Crystal's will,[note 2] and Celestia dies when the newly transformed Cid absorbs her phantoma. Her crystallized body plummets into the abyss below the site of the final battle.

Shinryu Celestia's body lies among the grass and the trees when peace returns to the world.

Though she can summon dragons to fight her battles, Celestia can use her l'Cie powers to transform into Shinryu Celestia. With the right amount of skill it is possible to defeat Shinryu Celestia without having to resort to Bahamut ZERO.

Celestia is a playable character whose battle style is similar to her predecessor, Andoria. She can, likewise, shoot projectiles and summon dragons in a lesser extent. Her strongest skill is to transform into Shinryu Celestia as she unleashes a lightning blast that resembles a dragon towards her opponent. As a disadvantage, she can be directly attacked due to her low defense.

Celestia appears on a Triple Triad card in the version playable via Final Fantasy Portal App.

Celestia is voiced by Nana Mizuki in the Japanese version of Final Fantasy Type-0.

She is voiced by Kim Mai Guest in the English version, who also voiced Shalua Rui in Dirge of Cerberus -Final Fantasy VII-, and Alyssa Zaidelle in Final Fantasy XIII-2.

Concept art of Celestia and Yuzuki.

Celestia in an FMV.

Celestia in the trailer. 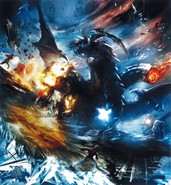 Celestia talking to her son.

Celestia in the Royal City of Mahamayuri.

Celestia means "heavenly" in Latin. Her Japanese name, (星姫, Hoshihime?), can be translated in English as "star princess".