The Citadel of Trials, also known as Castle of Ordeals, is a location in the original Final Fantasy composed of many small rooms with one or more teleport tiles. Only one teleporter in each room will bring the player to the next room, while the others will return the player to a previous room. The process of trial and error means several attempts will have to be made to reach the final room and retrieve the Rat's Tail, but the easy enemies here should not make the process difficult.

The Warriors of Light are sent to the Citadel of Trials by Bahamut to test their courage. Using the Crown from the Marsh Cave they gain access to the castle, and find a Rat's Tail inside. By presenting this to Bahamut, the Light Warriors earn the class change to their greater Job classes.

The Fortress of Trials was mentioned as one of the Wonders in Final Fantasy Tactics. It bears the following description:

Once a place of training for the royal guard in the ancient, this castle was lost in the Cataclysm. Graduates of the institution once filled the ranks of the Red Wings, a prestigious airship corps.

The Citadel of Trials appears as ruins on the game's world map, at the Bahamut Isles region. In the Confessions of the Creator Scenario, a Teleport Stone can be found near it, along with the Conquered Trials Gateway.

In the Dragon Caves, the party faces Bahamut, the Dragon King, who tells them they must bring proof of their courage from the Citadel of Trials.

On the second floor of the citadel there's a straight, narrow corridor containing a single teleporter that cannot be entered.

In all versions of the game, it's stated the Crown is required to enter the Citadel, but because the Crown is obtained to confront Astos during an earlier mandatory quest, it is impossible to reach the Citadel without it. 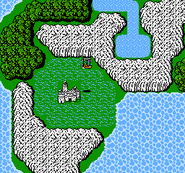 Citadel of Trials on the World Map (NES). 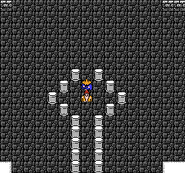 Citadel of Trials on the World Map (PS).

Citadel of Trials on the World Map (GBA).

The ruins of the Citadel of Trials and the Conquered Trials Gateway in World B in Dissidia 012 Final Fantasy.