The Citadel is a skyscraper in the city of Insomnia in the Final Fantasy XV Universe where the royal family lives, and where the Crystal of Lucis is kept in the center. The light of the Crystal emanates from the Citadel and into the sky to project the Wall that protects Insomnia, upheld by King Regis.

The gates to the Citadel are heavily guarded. When Emperor Aldercapt and his convoy arrive for the treaty-signing ceremony, their vehicles pull to the outside of the Citadel. There is a monument to King Regis ( 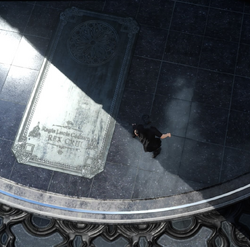 ) in the middle of this area.

As a battle arena, Noctis can point-warp up the tower (

). The area is a battle arena in Ch.14, but is also accessible as a "training grounds" playable during the time the game is installing; after the game is installed, the option to "train" here disappears. The installation-period battle is an endless horde of goblins fought during daytime on the Citadel plaza, with Carbuncle following Noctis around. Noctis has the Two-handed Sword, Broadsword, Javelin and Fire elemancy on his weapon loadout.

The Hall of History has numerous paintings that depict the coming of the True King. When the player visits this room in Final Fantasy XV, they can look at the pictures along the walls. Staying in the room and looking at the paintings has the party make various comments, including Gladiolus wondering whether the story they depict will come true with Noctis affirming he will make sure of it, Ignis commenting that when Noctis was young he had left a mark in a painting and had his attendant cover it, and the party noting how "the darkness of legends" doesn't appear in any of the paintings.

The room has two sets of stairs leading to the golden throne that is surrounded by elaborate metalwork.

The Crystal whose light emanates into the sky from this room is kept in the Crystal chamber in the middle of the building between the four "towers." The room is sealed by a vault.

The Wall that protects Insomnia, and thus the Crystal, is projected from the Citadel at the behest of the reigning monarch via the Ring of the Lucii, a royal heirloom said to originate from the gods of Eos. The kings of Lucis are sworn to protect the magical Crystal until the prophesied time when the True King would be born of their lineage. Paintings depicting the coming of the True King are kept in a prominent room in the Citadel. In M.E. 734 Ardyn Izunia faces off against King Regis, and soon against the Mystic himself, outside the Citadel, but is eventually spirited away by Bahamut and the Wall holds. Upholding the Wall drains the monarch's life-force, however, and Regis has aged beyond his years and become frail. When Chancellor Ardyn Izunia of Niflheim arrives to offer terms of peace in 756, Regis feels out of options.

The royal family lives at the Citadel, but to gain independence Prince Noctis has an apartment in the city where he stays most of the time, although he still has a room at the Citadel as well. As depicted in Final Fantasy XV Prologue Parting Ways, Noctis heads to the Citadel with Ignis the day before he is to depart to Altissia for his wedding. Noctis is to see his father, but is told the king is too busy. While at the Citadel he bumps into Iris Amicitia who is at the Citadel to see her father, Clarus Amicitia, King Regis's sworn Shield who is in a meeting with the king. She has brought a change of clothes for her father who's been so busy lately with the preparations for the peace treaty between the kingdom of Lucis and the empire of Niflheim, he sleeps at the Citadel.

Noctis and Ignis head to Noctis's quarters. Noctis doesn't know if he will still use his room at the Citadel after the wedding, as Lunafreya, his bride, would live with him. Noctis and Ignis reminisce of the times they snuck out of the Citadel together. Noctis had hated being stuck in the Citadel as he couldn't get a moment alone, though he knows it is because everyone worried about him after his childhood incident.

At the Crownsguard's training hall, Clarus Amicitia tells Gladiolus, his son, about the security measures in place during the signing ceremony, and Prompto Argentum arrives for his Crownsguard uniform he is to wear for his trip with Noctis. In the Kingsglaive briefing room, Titus Drautos asks arranges for Nyx Ulric to drop Noctis off to his place as the Kingsglaive will be using Noctis's car to ferry important guests for the treaty-signing.

Noctis spends his last night in Insomnia at his apartment in the city, and the next day they return to the Citadel. They meet King Regis at the throne room who sends them off to their journey. As the descend the steps outside the Citadel, Regis catches up with Noctis for a final farewell. After Noctis leaves Insomnia, everyone prepares for the upcoming peace treaty signing ceremony. Emperor Aldercapt arrives with Chancellor Izunia and Princess Lunafreya, Noctis's bride, although Regis had sent a Kingsglaive member to escort her to Altissia for the wedding. Regis is relieved to meet Lunafreya at the throne room nonetheless, seeing that she holds no grudge against him or Lucis, unlike her brother Ravus.

The Kingsglaive soldier Nyx Ulric becomes Lunafreya's bodyguard, and when she is held hostage outside Insomnia, Ulric mobilizes the Kingsglaive to save her. During the rescue operation he discovers many Kingsglaive members have turned on the king, and that the operation was a distraction. While the Kingsglaive are away, the empire attacks Lucis, steals the Crystal from the Citadel, and the Wall dissipates allowing the empire to deploy its magitek infantry and Diamond Weapons into the city.

Nyx and Lunafreya make their way back to Regis at the Citadel, and Regis gives her the Ring of the Lucii so she can hand it to Noctis. Nyx, Lunafreya and Regis begin to escape the Citadel together, but in the room of the paintings of the prophecy Regis erects a magic barrier between himself and the two, asking them to go without him. Regis is killed by General Glauca of Niflheim while Nyx and Lunafreya make their way out. Nyx gains the power of the old kings to fight the empire and stays behind, and Lunafreya escapes Insomnia and begins her journey to rendezvous with Noctis. News of Insomnia's fall are broadcast around the world with reports that occasional outbursts still occur around the Citadel, but the imperial forces have quelled most sources of unrest. The empire blames "insurgents" for the attack on the Citadel and paints themselves as the peace-keepers for establishing control in Insomnia.

The Citadel is the only lit building in the ruins of Insomnia ten years later when Noctis returns to fulfill his destiny as the King of Light. Insomnia is abandoned for all but the daemons and magitek troopers left behind from the invasion ten years ago. The world has been taken over by the Starscourge and is engulfed in an endless night. The retinue discovers the Kingsglaive Base Camp underground, but Ardyn sets the metropolis ablaze with a meteorite shower and cloaks the Citadel in a Wall beaming with daemonic energy.

Noctis and his friends fight their way through to the Citadel gates where they find Ardyn's "guard dog", Cerberus, waiting for them. After dispatching the daemon, Lunafreya's spirit appears to them and summons the Astrals to break through Ardyn's Wall. Noctis meets Ardyn outside the Citadel, who ushers the daemonified Astral Ifrit upon him. Noctis fells him with the help of the other Astrals, and makes his way to the Citadel.

In the Hall of History Noctis asks to see the photos Prompto took during their journey, and takes one of them with him to face Ardyn at the throne room. Ardyn is Noctis's immortal ancestor who has become the embodiment of the Starscourge that plagues the world, and he has brought the Crystal back to Insomnia in wait for the True King. Noctis fights Ardyn and fells him outside the Citadel.

Noctis sends his friends away in the same manner his father sent them on their journey ten years ago, and returns to the throne room to offer his life to fulfill the prophecy. He sits upon the throne and calls upon the spirits of the old kings, who attack him until Noctis dies and his soul enters the Ring of the Lucii. Noctis and the combined powers of the Lucian monarchs destroy Ardyn's spirit in the afterlife. The Ring of the Lucii disintegrates and the sun rises upon the world.

Noctis and Lunafreya appear together at the Lucian throne marked Noctis Lucis Caelum CXIV in wedding attire, while Regis Lucis Caelum gives them his blessing.

What becomes of the Citadel and the rest of Insomnia afterward is unknown, as there are no heirs to the throne.

In Final Fantasy XV: Episode Ignis Verse 2, Noctis and his friends as well as Ravus find a way to bring the light back to the world without Noctis dying or the Ring of the Lucii shattering, and Noctis continues to rule Lucis. As he sits upon the throne, Ignis (who has retained his vision) comes to visit him.

In Final Fantasy XV -The Dawn of the Future-, Ardyn accumulates power too great for the True King to purge with the Ring of the Lucii, and the Astral Bahamut decides to eradicate life on Eos. After Noctis learns the revived Lunafreya has gone to the Citadel to kill Ardyn, he follows her and is caught up by his friends. Ardyn explains Lunafreya's and Bahamut's plans, yet still wants the battle of kings. Noctis appeases and defeats Ardyn, but doesn't kill him, realizing this no longer saves the world. Daemon Queen Lunafreya destroys the throne room as Bahamut commands her to release the darkness she has gathered to energize his Teraflare. Bahamut raises the Citadel building into the air to take the Crystal and throne out of reach, but Ardyn warps there and Noctis and his friends follow on Aranea Highwind's airship.

Noctis saves Lunafreya, and while she is cared for by his friends, he fights Bahamut's physical form with the help of the other Astrals while Ardyn sits on the throne while wearing the Ring of the Lucii and enters the Beyond with the Lucii to fell Bahamut's spiritual form. As Bahamut is felled the Crystal shatters while purging the world of darkness, and the Citadel begins to fall from the sky. Titan saves everyone by catching the building, though it crumbles after everyone makes it to safety. The Astrals fade from existence and the dawn breaks, mankind being left to live on without the guidance of the Crystal or gods.

The Citadel area has the final bosses. Ifrit is fought outside the entrance. If the player enters the building and then leaves, red giants will spawn outside.

Entering the elevator is the point of no return, and the player must fight three rulers of yore during the trip to the throne room: The Fierce, The Rogue and The Mystic. The final boss battle, though initiated in the throne room, takes place in the skies of Insomnia and outside the steps of the Citadel, where Ifrit was fought.

The Citadel appears to be designed after the real-life Tokyo Metropolitan Government Building. It first appeared in the Final Fantasy Versus XIII E3 2006 trailer where Noctis descended the stairs outside to alone face a line of armored soldiers.

Insomnia appears as a stage. The arena is the outside of the Citadel where the full game's final battle is fought. Its night version has the thirteen Lucii watching over the arena.