A forehead band for warding off undesirable magicks.

The Circlet (サークレット, Sākuretto?) is a recurring piece of equipment in the Final Fantasy series. It is most often a helmet, and gives a variety of stat boosts, mostly to Magic and Magic Defense. In this sense, it could be considered a counterpart to the Twist Headband.

Circlet is a mid-ranked helmet that provides +4 Defense, +7 Magic Defense, +7% Magic Evasion, and +5 Intelligence. It can be dropped by Lamage, or found in a treasure chest in Agart Mine or the Lodestone Cavern.

The Circlet can be bought in the Phantom Village for 4,500 gil or dropped from the Gorgimera, as well as found in a chest at the top floor of the Island Shrine. It gives +10 Defense, +2 Magic Defense, and +3 Magic Power. It can be equipped by mage classes, like the White Mage and the Geomancer.

The Circlet is equippable by all characters except Umaro. It can be bought in Jidoor and Thamasa in the World of Ruin for 7,000 gil. It gives +2 to Strength, +1 to Speed, +3 to Stamina, +4 to Magic Power, 25 Defense, and 18 Magic Defense. Although the defensive boost is mediocre, no other helmet gives such a high combination of stat boosts, making the Circlet useful when paired with strong armor to offset its low Defense.

The Circlet is an accessory and can be stolen from Snow, Ho-chu, and Ultimate Weapon. It gives +30 to Spirit and Magic. Although the stat boosts are high, the rarity of Ho-chu and Snow makes acquiring them in bulk difficult.

A circlet said to have been worn by a fairy-tale sorceress.

The Circlet is an accessory that can be bought at many shops through Midgar. It increases max MP by 10%, and magic power by 5%.

The Circlet's design and description seem to be a reference to Sorceress Edea from Final Fantasy VIII.

The Circlet is an accessory that grants a +10 bonus to Zack's Magic stat. When used during Materia Fusion, x5 Circlet give Mag +1. It can be found in a treasure chest at the end of Chapter 3 and during Mission 8-4-2 and stolen from Mover and Evilgoyle and dropped by Master Tonberry.

The Circlet can be refined using Quezacotl's Card Mod ability from Gerogero cards x10 or mugged from Buel and NORG. It can be refined into Aura Stone x2 with Siren's Tool-RF ability, or used to teach a GF the Mag+20% ability.

The Circlet gives 51 Magic Defense and nullifies Earth-elemental damage and teaches Clear Head and Jelly. It can be found in the Outer Island 2 Chocograph treasure, dropped from Behemoth in the Treno weapon shop (disc 4), or synthesized at Black Mage Village (disc 4) for 20,000 gil, a Coronet and Rosetta Ring.

Various Circlets exist as headgear, usually as part of robe sets. Many of them are designed for mages, though the Paladin's Artifact/Relic head pieces are also a circlet.

In the original version, Circlet is the ultimate mystic headgear, giving 60 Magick Resist, 2 Strength, and 10 Magick Power and requiring the Mystic Armor 12 license for 100 LP. It can be found in the Pharos (Third Ascent/Spire Ravel-2nd Flight), and in the Subterra - Abyssal-South (50% spawn rate), both without the Diamond Armlet equipped, Once claimed, neither chest will respawn, making Circlet a missable armor piece.

In the Zodiac versions, Circlet now provides 60 Magick Resist, +151 MP, +2 Strength, +10 Magick Power, and requires the Mystic Armor 13 license for 110 LP. It can be found as a treasure in Henne Mines (Phase 2 Dig) and Cerobi Steppe (Crossfield), and rarely stolen from Zeromus in Trial Mode Stage 81 and uncommonly stolen from Judge Ghis in Stage 100. It can be equipped by the White Mage, Red Battlemage, Black Mage, and Bushi boards.

Jewels have been embedded around the front of this helm. The design exposes the wearer's ears, making it lighter.

The Circlet gives +100 HP. It can be equipped by the Knight, Dragoon, and Samurai classes. It can be bought at the outfitters for 10,000 after the storyline battle 28 and found as a rare treasure at Lake Poescas with the Treasure Hunter ability.

Ornament meant to protect the wearer from harmful magic.

The Circlet gives +3 to Defense and Magic Resistance. It is equippable by all jobs apart from Paladins, White Monks, Defenders, and Dragoons. It can be purchased at shops for 1,440 gil.

The Circlet is a low-ranked hat that provides +3 Defense and +6 Resistance. It can be bought for 240 gil in the shop after creating it in the Bazaar after using a Fire Stone, Rabbit Pelt, and Wool. It can be equipped by all jobs excluding Dragoon, Paladin, Defender, and White Monk.

Circlet increases max MP by 40% and all Magic by 15. It can be bought from the Akademeia Armory (after completing The Battle on the Beach on Agito difficulty), or found as a random treasure in Bethnel Caverns.

Circlet provides 3 Defense, 5 Magic Defense and 2 Magic Evade. It gives Intelligence +2. It can be bought for 700g in Deist, Dragon Roost, Alfheim and Yggdrasil.

The Circlet is a level 92 hairpin that decreases HP by 290 and increases Bravery by 348. It also boosts Bravery recovery by 75%. It can be obtained from the shop by trading 14,780 gil, a Hypnocrown, Lapis Lazuli x5, and Oath Crystal x3.

A beautifully gilded circlet in a vivid lime green color. Although it may not seem very impressive, but the mysterious powers it houses protect its wearer from incoming attacks. Once a garment meant for noble ladies, many of them were said to have worn this circlet when they would visit a battlefield to boost troop morale. However, there were many women who chose to fight in the vanguard as well.

A helm that increases magical power.

The Circlet appears as a helmet within the Forsaken Dungeon. It provides 12 Armor Def, 10 Durability, +5 Magic Atk, +4 Magic Def, and -2 Speed.

A simple crown lacking arches and a cap. A spell that heightens the focus of spell casters is engraved on the metal that rests directly on the head. 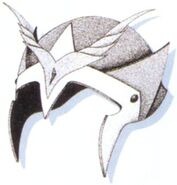 [view · edit · purge]A circlet is a crown with neither arches nor a cap (internal covering).