No! No one touches my hammer but me!

Cinna is a temporary playable character in Final Fantasy IX. He is a member of Tantalus Theater Troupe and thus a thief and an actor residing in Lindblum. He possesses the Unusual Potion item Zidane needs to further his quest.

Cinna has fairly clownish features, with a wide mouth and red nose. He has small, close-set yellow eyes, pointy ears and a black goatee. Cinna wears a brown ensemble consisting of a thick leather collar, cropped short-sleeved jacket which bares his protruding belly, wristbands, shorts (with the fly undone), boots, and what appears to be an off-white chef's hat.

Cinna has a passion for his hammer (which he lets no one else use), exotic coffee, and South Gate Bundt Cake. He is also skilled with machines. He does not take kindly to anyone poking fun at his appearance and cannot sleep at night without his Princess Garnet doll, as seen in a humorous ATE. As with the rest of Tantalus, he is a skilled actor and even goes out of his way to call Steiner a bad one.

This is great. First we kidnap her, then we kill her. We'll hang for sure.

Cinna is onboard the Alexandrian-bound M.S. Prima Vista where he participates in the fight against Masked Man, who turns out to be Baku. Cinna soon acts out his part in the play, I Want to Be Your Canary. The purpose of the play is to be a present for Princess Garnet's sixteenth birthday and to act as a guise for Tantalus to kidnap her. It turns out Garnet herself wishes to be "kidnapped" to escape her wicked mother, and comes aboard the Prima Vista willingly. Cinna helps Zidane and Garnet escape from Steiner and his Knights of Pluto.

Zidane, Cinna, and Blank corner Steiner, and Cinna helps them escape onto the stage. The Prima Vista escapes Alexandria, but Queen Brahne opens fire at it upon realizing they are taking the princess. The ship crash-lands in the Evil Forest, and Cinna helps the survivors who landed outside the airship and stays there, offering goods to Zidane, Steiner, and Vivi before they head out to find Garnet who fell off the airship in the chaos.

Cinna, Baku, and Marcus escape the Evil Forest, and stop to rest at South Gate in the King Ed Plains where Cinna makes coffee. Marcus decides to rescue his best friend Blank, who was petrified by the forest. Cinna travels with Marcus and Baku to the South Gate summit station where they meet up with Steiner and Garnet, who are returning to Alexandria. Garnet feels culpable for what happened to Blank and agrees to help Marcus get the Supersoft item to heal Blank's petrification from Treno. Steiner and Garnet go with Marcus, while Cinna waits for a cable car to take him back to Lindblum. Cinna overstuffs himself with South Gate bundt cake, and Baku finds him slacking off and punishes him.

It is assumed Cinna returns to Alexandria with Baku and Ruby to help in the struggle against Brahne, who has gone wild with power and destroyed Burmecia, Cleyra and Lindblum, wrecking Tantalus's home base in the process. After Brahne's death Ruby opens a mini theater in Alexandria, and Marcus, Blank (now cured), and Cinna help her. They decide to take Vivi to the first show and use him as a decoy so that Ruby will not scold them for being late.

After Garnet is made the new Queen Kuja attacks Alexandria and most of the castle and the town are decimated. All of Tantalus except for Ruby return to Lindblum to rebuild their headquarters. Marcus asks to borrow Cinna's hammer, but Cinna will not let him have it. Zidane and company try to cure Regent Cid who has been turned into an oglop by his absconded wife, and one of the potions Zidane needs for a cure is in Cinna's possession. The "cure" does not work, however, and only turns Cid into a frog rather than reverting the curse.

After Cid makes amends with his wife she agrees to turn him back into human, Cid builds his newest airship that can operate without Mist, the Hilda Garde III. Cinna is onboard the Hilda Garde III when Cid comes to help Zidane and his friends to enter Memoria, their entrance being blocked by a horde of silver dragons. Zidane and his friends follow Kuja to the depths of Memoria and fell him for good, and peace returns to the world. Some time later Tantalus returns to Alexandria to puts on another show of I Want to Be Your Canary for Queen Garnet, Cinna among them.

Cinna is a thief and thus has high Speed. Cinna shares the same character slots as Quina and thus his levels carry over but his stats do not. A high level Cinna would make Quina weaker stats-wise, as they would lose levels where they could have gained stats with the right equipment.

Although the player cannot normally see it in-game, Cinna does have a menu portrait during the times he is in the player party. Cinna also has a victory pose that the player never gets to see (see Gallery).

Cinna's Mocha Coffee can be found from the South Gate as part of Morrid's Coffee side quest.

Cinna's weapon of choice is his Hammer, while his armor consist of hats, armlets, and light armor. Like Blank and Marcus, he can also equip the otherwise female only Lamia's Tiara. Cinna's equipment option cannot be fully viewed unless the player hack both Cinna himself into the party and all items into their inventory with a cheating device.

The player can obtain Cinna's Hammer by finding all thirteen Stellazzio coins for Queen Stella in Treno. The Hammer can be synthesized into Tin Armor, Steiner's best armor, but if the player has the Hammer in their inventory during the ending sequence, they get an extra scene in the ending.

Cinna's battle commands consist of Attack, Steal, and Item. Since Cinna is only a temporary party member, he has no Trance bar nor any support abilities. He also cannot learn any new abilities found on equipment. He can steal, similar to the other thieves. Any successful steals from Cinna contribute to the attack power of Zidane's Thievery ability, even before this skill is acquired.

In the GBA/PSP/mobile ports of the original Final Fantasy, Cinna is one of the automatic names the player can choose for the Monk job. In Final Fantasy X-2 a non-playable character called Cinna is seen not wanting to part with his hammer.

In the German translation, Cinna speaks with a thick Bavarian accent and ends his sentences with the term "zefix!", which disappears once he is on stage playing his role. In the Italian version, he speaks with a Roman dialect, much like Quina. In the Spanish version, he has a partial Andalusian accent. In French, he speaks with a lisp. In the original Japanese, he speaks rather normally, but ends his sentences often with "ずら" Zura. This makes him one of the few characters in the pre-voice acting Final Fantasy games to have an accent. 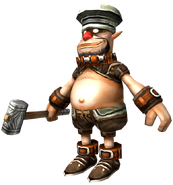 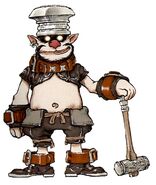 The name Cinna is most likely taken from one of the characters in Shakespeare's play, Julius Caesar. Most Tantalus members have names inspired by theater. He is called Er Cina in the Italian version.