If I can defeat you here, the fal'Cie plan will fail. I will use all my remaining power! I will set you free!

When 60% of his HP have been depleted, Raines will use Metamorphose, immediately followed by Seraphic Ray, which deals high damage to all party members, removing all status enhancements from the party and all status ailments from himself. From this point on, Raines does not signal which role he is assuming, but still uses Offensive Shift, Defensive Shift, and Recovery Shift, as well as two new roles, analogous to the Synergist and Saboteur. During Offensive Shift, he gains access to Ruinga, and his physical combination attack becomes more powerful.

During Recovery Shift, he begins using Curasa instead of Cure. During his "Synergist" role, he casts Protect, Shell, Vigilance, and Haste on himself in quick succession. During his "Saboteur" role, he casts Poisonga, Deprotega, Deshellga, and Dazega. He will use Seraphic Ray periodically; one can tell if he is going to use it as he will uphold the guard position.

Like Barthandelus, Raines will cast Doom on the party leader if the battle exceeds 20 minutes.

Before entering battle, the player may enhance the party with Fortisol and Aegisol. It is useful to have Phoenix Downs on hand.

Staggering Raines is an effective way to defeat him, thus attacking fast with Ravagers in the paradigm is a good idea. When Raines uses his Defensive Shift it is a good time to heal. Saboteurs can be deployed to give him status ailments: he is most susceptible to Slow, but will remove any status abnormalities in his healing paradigm with Esuna.

If he enters the healing phase, the player should switch to Relentless Assault and attack him until he switches to the offensive phase. If he goes back on the offensive, the player can switch their paradigm to include a Sentinel and/or Medic and continue attacking, as Raines will probably be targeting the Sentinel most of the time.

When Raines is either nearing the stagger threshold, or is already staggered, and if Lightning is the leader, she can summon Odin and remain as a Ravager to attack Raines. Once the Gestalt Gauge is filled, the player should ensure Raines's chain gauge is still high so that Odin and Lightning can devastate him in Gestalt Mode, repeatedly using Stormblade and Razor Gale before concluding with Zantetsuken, because Raines's chain gauge should already be running low. Ideally, this should defeat him, or at least leave him close to defeat.

If Raines barely survives Zantetsuken, and the player still has TP left, Quake can be cast as soon as the party returns to deplete his final few Hit Points.

Another good way to defeat Raines is to exploit the Commandos' Launch ability. The idea is to stagger Raines, and then pummel him with launched Commando attacks. It is good to include Sazh as a Ravager for his Synergist beneficial status effects, and only attack when the party is fully enhanced. Sazh can't use Launch as a Commando. A good battle team for this strategy is Lightning (as leader for a summon), Snow (or Fang, but her RAV role will need some development) and Sazh. This provides two Commandos with Launch, while Sazh provides the best Synergist statuses for the fight. The recommended paradigms are Protection (MED/SEN/SYN) as the active paradigm, plus Tri-Disaster (RAV/RAV/RAV), Aggression (COM/COM/RAV), Entourage (MED/SEN/RAV) and Thaumaturgy (MED/RAV/RAV).

Raines is easier to defeat while he is still in his first form. Ideally, the party will stagger him before he metamorphoses and once he is staggered, the two Commandos and one Ravager combo can defeat him, even if Raines has full HP, before he recovers. By keeping him launched, the two Commandos prevent him from guarding or launching a counter attack.

The party cannot launch Raines while he is guarding, so they need to finish filling the chain gauge immediately after he stops defending, giving the party an opening to both stagger and launch him. Raines's guard periods cannot be avoided, but can be used to fill his chain gauge. If the party are on the verge of staggering Raines while he is still in his guard phase, they can switch to Protection to avoid pushing the gauge past the stagger limit.

Defeating Raines before he uses Metamorphose makes the subsequent cutscene nonsensical, as he will suddenly have a set of wings that appear out of nowhere.

. Lindzei is the god that created Cocoon and its fal'Cie. The battle arena is also sectioned off by crystalline crests of Lindzei

Despite having an enormous clawed arm, Raines kicks more often in his combination attack. He will only slash with his claw once per combo. 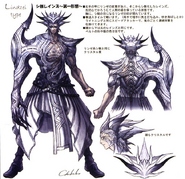