Oh, you know of him? He's my grandfather. Grandpa is so awesome! When he's researching, he's unstoppable - he never gives up until he's found the solution!

Professor Cid Previa is a non-playable character in Final Fantasy V who also appears in the anime sequel Final Fantasy: Legend of the Crystals with the name "Shido." Cid is an elderly inventor and scholar from Karnak who researches the Crystals. Together with his grandson, Mid, who researches at the Library of the Ancients, Cid is one of the foremost inventors in Bartz's World.

Meeting Cid in the iOS version earns the player the "Scientific Genius" achievement.

Cid is an older man with long white hair and white mustache. He wears a red shirt and pink trousers. In his Yoshitaka Amano artwork, he is depicted as draped in layers of red, gold, black and pink cloth, leaning on what appear to be mechanical apparatuses and a possibly robotic dragon.

According to his grandson Mid, Cid is a determined researcher who never gives up until he finds a solution. Once he becomes aware of the possible adverse effect his Crystal amplifier machine could have on the Fire Crystal, Cid wastes no time in trying to warn the monarchy, and when that does not bear fruit, to shut it off himself. Cid feels guilty for the damage his invention has caused and falls into depression. Cid is inspired by the inexhaustible belief his grandson has in his abilities as an inventor, and wants to use his skills to benefit the world rather than harm it.

After researching the Crystals, Cid developed machines to produce more energy from them. With the use of the machines, Karnak became one of the most powerful and prosperous kingdoms in Planet R. Excessive use of Cid's machinery, however, was damaging the Fire Crystal's structural integrity, and when Cid discovered this, he attempted to shut down the machine in Karnak, but was imprisoned by the Queen.

Cid is freed shortly after the Warriors of Light are imprisoned. The Chancellor of Karnak, having realized that Cid was right in speaking against the use of the Crystal machine, begs him to shut down the amplification device. Cid agrees on the condition that the Warriors of Light come with him. The Chancellor protests, claiming that the party was seen leaving the same meteorite that the monsters currently attacking Karnak poured out of. Cid remains firm, forcing the Chancellor to comply.

The four fail to save the Fire Crystal, and Cid goes to the pub in Karnak to sulk. The party travels to the Library of the Ancients and meets Mid, who is outraged to hear of Cid's state. Mid accompanies the Light Warriors back to Cid, and smacks him back to his senses. Using a book he found in the library, the two refit Karnak's Fire-Powered Ship to run without the Crystal or the wind, allowing the Light Warriors to travel the world to save the remaining Crystal. The ship is destroyed in a whirlpool, but the party makes it back to the Library of the Ancients. Cid and Mid tell the party they saw King Tycoon in the desert to the west, and provoke a Sandworm attack to allow the group to enter the desert to search for him.

While the party explores the city beyond the desert, Cid and Mid fly the black chocobo they left behind to its home where they fall into a pitfall, and meet up with the party who has also fallen into a trap. The group finds the Fire-Powered Ship unharmed in this ancient underwater deposit, as well as an ancient airship, which Cid activates. When the Ronka Ruins lift off, Cid and Mid instruct the party how to infiltrate the vessel and find the Earth Crystal. They retrofit the airship with Adamantite so it can fly up to the ruins. Afterward, the two tell the party how to open a portal to Galuf's World using the crashed meteorites.

Cid and Mid make a minor appearance in the Merged World, where they again refit the airship, this time to allow it to transform into a submarine.

After the Light Warriors put a stop to Exdeath's plans, Cid had all the papers and knowledge he had accumulated about the Crystals destroyed so no one might misuse them while he took the secret to utilizing their power to his grave. The demon Ra Devil was determined to use the Crystals for his own plan and stole Cid's brain from his grave. Mid tried to protect his grandfather's grave, but was killed by Ra Devil. In the end, Ra Devil is destroyed and Cid gets his brain back so that he can finally rest in peace.

Due to the dub of the film being handled by Pioneer LDC, Cid is erroneously referred to as Shido in the English version of the OVA. 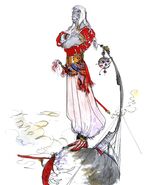 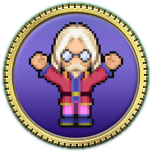