John Snyder*(credited as Stephen Martello in the DS version)

The jolly, knowledgeable chief of the airships who yearns to fly like a bird in the skies.

Cid Pollendina is a playable character in Final Fantasy IV and its sequel, Final Fantasy IV: The After Years. He is a master engineer who designs the airships that make up the Red Wings in Baron. He is an old acquaintance of Cecil Harvey and is adventurous and fun-loving. He is the first playable Cid in the main series.

Cid is a large man with a brown beard, and wears a blue outfit with red gloves and boots, a tool belt holding his trademark weapon, and an aviator's helmet and goggles. In the 3D remake release of Final Fantasy IV, Cid's mouth is exaggeratedly large. In Final Fantasy IV: The After Years, Cid's beard has turned white and his outfit no longer has sleeves and his boots and gloves are blue, but otherwise his appearance is identical. His artwork depicts him wearing a brown coat wrapped loosely over his shoulders, but this is not present in-game.

Cid is a loud and proud old man, boastful of his prowess with machines and of having the skill to back it up. Cid often doesn't make a strong first impression, reacting with offense when Tellah, Edge and Fusoya give him orders or question his technical skills. However, Cid is a good man with a firm belief of right and wrong, and cares for Cecil and Rosa. He has a fatherly streak, as it is detailed in Final Fantasy IV Settei Shiryou Hen that he has a bond with Cecil, whom he views almost like a son.[2] He works hard to the point of collapsing from exhaustion and is known to be late coming home from work. In Final Fantasy IV: The After Years his age has not stopped him from being an active engineer and pilot, taking an equally stubborn Luca under his wing.

After Cecil is discharged from his post as captain of the Red Wings Cid hears the news and apologizes to Cecil, but has to rush home before his daughter scolds him. Later, Cid is working on a new prototype airship, the Enterprise, but notices the king is not acting like his normal self and is performing many evil deeds. Cid hides the Enterprise and refuses to show it to the king, and is imprisoned for treason.

Cecil, Tellah, Yang Fang Leiden, Palom, and Porom free Cid by defeating the king, who turns out to be Cagnazzo, the Archfiend of Water. After Cagnazzo is defeated, Cid is free and runs to meet Cecil, and joins his party after he learns Rosa has been kidnapped. He agrees to show Cecil and his friends the Enterprise. Cagnazzo had one last trick up his sleeve and when Cecil tries to escape, the walls begin to cave in. Palom and Porom save Cecil's party by petrifying themselves. Tellah tries to heal them, but to no avail and Cid takes them to the Enterprise.

The party cannot escape on the Enterprise without an encounter with the Red Wings. Kain Highwind issues an ultimatum where Cecil either gets Kain the Crystal of Earth in Troia or Rosa will die. Cecil has no choice but to go to Troia where he reclaims the Crystal from the Dark Elf, but upon handing it to Golbez in the Tower of Zot he refuses to give Rosa up. Tellah fights Golbez and breaks his control over Kain before dying. Kain takes the party to where Rosa is held captive. Cecil saves Rosa, and shares a kiss with her. Cid makes fun of them, but Yang scolds him.

The Red Wings are already battling the dwarves' tanks and the Enterprise is damaged. Cecil's party seeks help from the dwarves in their castle where they meet King Giott, the ruler of the dwarves. He asks the party for help, but Cid has to take a leave of absence to repair the Enterprise and wrap its body in Mystic Silver, which could be used to help the Enterprise withstand the intense heat. Cid tells his crew to put a hook on the Enterprise should Cecil return to Baron. That way, the hovercraft could be carried to new locations.

Cid returns in time to save Cecil's party from falling into the lava. He introduces himself to Rydia, a Summoner from Mist, and has her call him "uncle". The Enterprise is wrapped in the Mystic Silver that allows it to cross the lava, but the Red Wings have been modified as well, and they have the Enterprise in a dogfight around the Underworld. Cid orders Cecil to take the wheel and exit the Underground while he closes the hole with a bomb, and jumps off the airship to save the others and is assumed dead.

Cid survives and the dwarves take care of him. When Cecil returns in his new airship, the Falcon, Cid decides to wrap its body in Mystic Silver as well so it can fly over the lava. When Cid meets Edge they have a shouting match that Rydia has to break up. Cid makes Edge work on remodeling the airship, but becomes fatigued and has to rest. Later, Cid attaches a drill to the head of the Falcon to open the hole to go back to the overworld.

Cid becomes fatigued but is healthier than he was before. He eventually recovers and builds a new fleet of airships, which he leads in an attack on the Giant of Babil. Cecil's party boards his airship to enter the Giant and after the Giant is destroyed, Cid prays for Cecil in the Tower of Wishes in Mysidia. In the Game Boy Advance and PlayStation Portable versions of the game, he can rejoin the party at this point.

After Zemus has been felled and peace returns to the world, Cid is the best man at Cecil and Rosa's wedding.

Cid is a guest present at Damcyan's reconstruction ceremony, having raced there in his airship. When a castle guard informs Edward of trouble on Mt. Hobs, Cecil, Rosa and Yang leave to investigate, which leads them across the continent to Fabul in time for the birth of Yang's daughter.

Flying in on the Falcon, Cid meets with the group and tells them he has received word that monsters are pouring out of the Sealed Cave in the Underworld. Together with Cecil, Palom, and Porom, they explore the cave only to find what appears to Rydia within its depths. After taking her to the Falcon to recuperate, they notice the Tower of Babil has begun to glow/ While the rest of the group makes their way inside, Cecil orders Cid to stay behind and look after the ship. 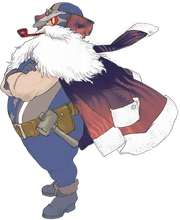 The kingdom of Baron's airship engineer. Though his beard may now be white, he refuses to retire and continues to demonstrate his prowess on the job. He is well-acquainted with Cecil and the others and is somewhat of a surrogate grandfather to Ceodore.

Even as an old man Cid refuses to retire and has taken Luca as an apprentice. Cid joins Cecil and Rosa to fend off the invaders led by the Mysterious Girl during the Battle of Baron. The group battles their way to the Baron Castle's ramparts when Cecil, sure that Baron will fall, orders Cid to take Rosa and retreat, which they reluctantly agree to.

They are next seen by Ceodore Harvey and Edward who accompany them to face the Maiden and Cecil, as well as Kain, who defeats his dark doppelganger and becomes the Holy Dragoon. After Cecil is knocked out of his possession from the Maiden by Odin, they join with others to defeat the Maiden as well as the Creator. Cid is last seen in the Dwarven Castle where he and his grandson Mid approach Giott and Luca, trying to figure out how to power an airship with the Crystals' magic.

In Final Fantasy IV Cid is a playable party member who can equip many weapons, primarily hammers and axes, has high physical stats, and has an Analyze ability to view the stats of an enemy (which scans one enemy in the 2D releases and all in the 3D releases). In the 3D release, Cid has an additional ability, Upgrade, which allows him to use an offensive item to add an elemental property to his attacks. Cid can equip little armor, and his magic stats the weakest, gaining no MP.

In Final Fantasy IV -Interlude- Cid returns as a playable party member and starts at level 34. He returns with his Analyze ability, and his role is identical to his role in the original game.

In Final Fantasy IV: The After Years Cid returns as a playable party member. He has a similar role, being a physical fighter, with his Analyze ability targeting all enemies as in the 3D release of the original game, and the same variety of equipment. His HP, Strength and Stamina stats are among the highest, though his Speed and MP stats are low. While Cid is a strong physical fighter, he has few unique abilities to offer compared to characters such as Cecil, Kain and Golbez.

Cid has made appearances in the following games in the Final Fantasy series:

He has also made non-Final Fantasy guest appearances in the following:

The After Years battle sprite (PSP).

Cid in the Chronicles opening.

Appearance in The After Years (iOS). 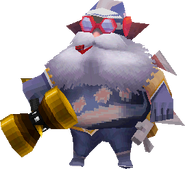 Cid's model from The After Years (iOS).

Victory pose from The After Years.

[view · edit · purge]Pollendina is based on a nickname given to Geppetto from Pinocchio. Geppetto's nickname (polendina, or corn meal mush, a dialectal form of the Italian polenta) comes from the yellow wig he wears. Cid's surname is especially befitting of him in Final Fantasy IV: The After Years, as he helps Luca repair Calca and Brina and teaches them the Final Calcabrina Band.