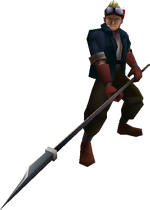 Cid is a playable character in Final Fantasy VII and the last mandatory party member to join. He roughly fits the description of a Dragoon, a traditional Final Fantasy job class, due to his use of a spear, jump-themed repertoire, high attack/defense stats and middling-low magic stats. He is a strong melee fighter.

Cid wields spears and lances and can use jump attacks in his Limit Breaks. His victory pose is to bend down and then take a smoke.

When he joins the party his starting level is decided by the following formula:

Cid's spears have high power and many boast numerous Materia slots coupled with Double Growth, with one of them, the Scimitar, being one of mere two equipment pieces in the game to give Triple Growth. His Scimitar only has two Materia slots and is thus desirable to grow one or two Materia rapidly, but if the player is looking for efficient Materia growth in the long run, they're better off with a weapon that gives eight normal Materia growth.

His ultimate weapon, the Venus Gospel, grows stronger as his MP is closer to full.

Cid is fought as a boss in Before Crisis -Final Fantasy VII-.