Regent Cid is very wise. He always thinks ahead.

Cid Fabool IX is a character in Final Fantasy IX. He is an aloof middle-aged man who rules Lindblum as its regent, having succeeded his father, Cid Fabool VIII. Cid acts as an ally to the party, aiding them in fighting Queen Brahne's aggression against the Mist Continent. He serves as a temporarily playable character during a short sequence, and as per tradition with Cids in the series, is the maker of several airships.

The notable aspects of Cid's appearance stay constant throughout all of his forms: his long, red cape and regal clothing, and his large mustache. This is how those familiar to him can attest to his true identity in spite of his changing appearance. In his human form, Cid has gray hair and is fairly tall and noble-looking, but in his other forms he is a hunchback.

Cid is a caring and wise figure whom the party can depend upon, particularly Princess Garnet. While trustworthy, Cid is not without flaws. He is arrogant and boastful of his achievements and airships. He is frustrated with his current form, and quick to complain. Although his arrogance led to him cheating on his wife, he is genuinely upset about it, although it could be argued he is more upset about the loss of his airship and pride than the loss of his wife. Cid attributes his failure to design a new airship to his change of form, saying it has affected his mental capacities, so the extent his transformation has affected his personality remains ambiguous. Cid remains sharp-witted, defending his position as champion in a Tetra Master tournament and outsmarting Kuja's machinations to help the party at Desert Palace. Though having no children of his own, Cid has a paternal streak.

Cid's mother passed when he was 7 years old.[1] When Cid was 16, his father collapsed due to an illness, passing the power to his son. He married Lady Hilda at 22 and a year later Cid Fabool VIII died. In 1794 Queen Brahne's husband of Alexandria died, and when attending the funeral, Cid met Princess Garnet.[2]

In July 1799 Hilda discovered Cid had been having an affair. She turned Cid into an oglop and absconded Lindblum with Cid's premier airship Hilda Garde I, an airship that can fly without Mist. Cid's condition was concealed from the public and a month after his wife's disappearance, Cid begun building Hilda Garde II.[1]

In January 1800, Cid ordered the Tantalus Theater Troupe to kidnap Garnet from Alexandria[1] during their performance of I Want to Be Your Canary due to Queen Brahne's increasingly odd behavior. Cid is an old friend of Brahne and her husband and Garnet calls him "uncle". Tantalus succeeds and Garnet begins traveling with the Tantalus member Zidane Tribal and their new friends.

When Zidane and the party meet with Cid in Lindblum, they discover he has been transformed into an oglop, an insect most deem repulsive. His aide Artania explains that six months ago an assailant snuck into the castle, transformed Cid, and abducted his wife. Cid later admits the transformation was done by Hilda herself when she discovered Cid had a fling with a girl he'd met at a tavern, and she made off with the Hilda Garde. Cid has been trying to build a successor, but his mind as an oglop is not the same. Cid wishes for Garnet to stay at Lindblum for her safety, but after news comes in that Alexandria has attacked Burmecia, she absconds the castle to return home to speak with her mother.

Cid pulls back the fourth division of Lindblum's airship fleet to fly to Burmecia's aid, exposing their borders to Alexandria. This proves fatal when Brahne's fleet attacks the city, and Brahne summons the eidolon Atomos. Cid surrenders and Alexandria occupies the city. Zidane and Garnet sneak back to Lindblum, and Cid helps them by telling them about Kuja, Brahne's weapons dealer, who is supplying her with an army of black mages. He provides them a way to the Outer Continent and an ancient map of the world to track down Kuja and halt Brahne's supply of mages.

Brahne follows Kuja to the Outer Continent, where the two do battle and Brahne perishes, leading to Garnet being instated as Alexandria's new monarch. She stays at Alexandria while Zidane and the others participate in a Tetra Master tournament in Treno and find Cid is the current champion, but due to his condition, Erin plays in his place while he advises her.

When Kuja attacks Alexandria with Bahamut, Cid takes the party there in the Hilda Garde II. The airship is functional with limited efficiency because Cid designed it with his oglop brain. After the Invincible demolishes Alexander and the Alexandria Castle with it, the party returns to Lindblum with Cid. He tells the party he witnessed Kuja in possession of the Hilda Garde I during the attack, piloted by the talking black mages of the Black Mage Village. Unable to construct a better airship to track down Kuja in his current state, Cid has Doctor Tot confect a potion to reverse his transformation, but it turns Cid into a frog instead.

Cid accompanies the party on the Blue Narciss sailing ship to search for Kuja and is captured along with them at the Desert Palace. When Kuja attempts to dispatch the party, Cid retrieves the key to their cells and reverses the hourglasses that will drop the party into lava when its sand runs out. He sneaks to the key guarded by a Hedgehog Pie and positions weights on a scale to reach the hourglass, saving the group.

Kuja flees with Eiko to Mount Gulug, and when Zidane and the party pursue to rescue her, they find Lady Hilda, who had run off with Kuja and provided him with the airship Hilda Garde I. Hilda returns to Lindblum and reverts Cid into a human as the two make amends. He scraps the Blue Narciss to construct the Hilda Garde III for the party's use while Hilda's information about Kuja aids in finding a path to Terra, Kuja's home world. As Zidane and his friends open the portal to Terra, they jump down from Hilda Garde III to the Shimmering Island and are transported to the other world.

After Kuja ravages Terra they return to Gaia on the Terran airship, the Invincible, and follow Kuja to Memoria, which has manifested above the Iifa Tree on the Outer Continent. A horde of silver dragons blocks the entry, but Alexandria's and Lindblum's airship fleets join their forces to fight them with Cid on the helm of the Hilda Garde III.

Cid pilots the Hilda Garde III to retrieve Zidane's party after they return from Memoria, and takes them back to the Mist Continent. Cid and Hilda adopt Eiko, a young orphaned summoner girl Garnet and Zidane met along their travels. While Cid and his family are on their way to another performance of I Want to Be Your Canary by Tantalus, he boasts of a "new Hilda Garde" airship; it is unknown if he means the Hilda Garde III, or if he has built a Hilda Garde IV.

"Cid's Theme" plays in Lindblum Castle. It is a slowly paced majestic theme with a drum roll similar to ones announcing important figures.

Regent Cid appears as an opponent in PlayOnline's Tetra Master.

Regent Cid
AVG Rank: 1.00
Wager: 1000
Motto: You cannot take to the skies with your eyes fixed on the ground.

A regent is defined as a "person selected to act as head of state (ruling or not) because the ruler is a minor, not present, or debilitated". A monarchy may also become a regency if the royal line dies out.

Cid Fabool IX might be based on Ferdinand von Zeppelin, both having pioneered airship development and sharing facial features, including the mustache. 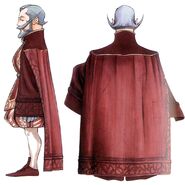 Concept artwork of Cid as an oglop.

Concept artwork of Cid as a frog.

Cid as a frog. 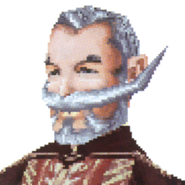 A close-up portrait from the Dissidia Ultimania Alpha.

Cid's office where he designs his airships.

Cid with his engineering team for the Hilda Garde III